Tokyo trip and a conversation with the wife

Apologies for having been so quiet on this blog of late.  Some old friends have been visiting from New Zealand, so gaming and blogging has had to make way for more social activities such as going out for a few beers and the odd yarn.  It's been good - too good, in fact!

We also had a family trip to Tokyo, during which I managed to get along to a game shop called Shosen Grande.   They have a floor dedicated to board and miniatures games, and  I'd never seen so many games together in one place before.  I was quite overwhelmed - not least by the prices.

After a bit of a browse I found two games in particular that I'd been coveting and had decided to get one of them.  My wife, however, interfered, the conversation going something like this:

"Is there anything else you want?"

"Oh, there's one other thing but it's pretty expensive, and I'd probably not get to play it with anyone anyway..."

"Can you get it through your online thing?"

"Well, it's out of print and shipping from the US or Europe would be ridiculous, so no, not really."

"Yeah, at some stage, I guess.  It's considered a bit of a classic."

"Take a look at this price!"

"Well, you may as well get it now when you can.  It's probably cheaper than getting it later."

"Do you have enough money on you?"

And so it was that, at a cost of around $US300, I walked away from Shosen Grande with two board games instead of one, a couple of things for the kids, a happy wife, and a no doubt bemused look on my face.

To finish, here's a quick shot of one quarter of the games floor.  There were three double sided shelves devoted to board war games and to Flames of War, as well as lots of other stuff.  Quite expensive, but well worth a look if you're in Tokyo. 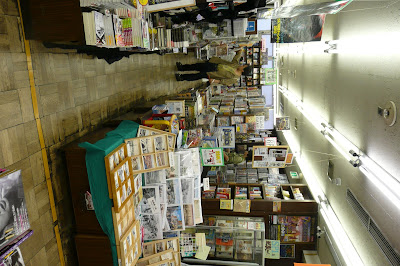 And now it's (almost) time to return to normal life...