Here are some picture of a Basic Impetus army I've put together out of bits and pieces figures that I never use.  The majority of the Gauls are I believe from Irregular Miniatures' 15mm range, with one or two that look as if they could be from Chariot.  I picked these up about five years ago off ebay before I was experienced enough to realise that painted figures are not necessarily a better buy than unpainted ones.  I'm afraid to say that I was so disapppointed in them that I put them away and tried to forget about ever having bought the things...

But, with my Basic Impetus project in mind (a project that limits itself to using excess figures from the collection) it seemed like a good time to pull them out and see if anything could be done with them.

After a few (not always entirely successful, it must be said!) washes, a tidy up here and there, the replacement of the odd broken sword or spear, a good spray of matt varnish to standardise the look and a rebasing they seem to be presentable enough for our purposes.  The figures are pretty rough, but they have some quite active poses so en masse they don't look so bad.  All in all, I'm reasonably pleased with the salvage job and I'm very glad that I've finally found a use for them!  Anyway, enough rabbiting from me - here are the pictures. 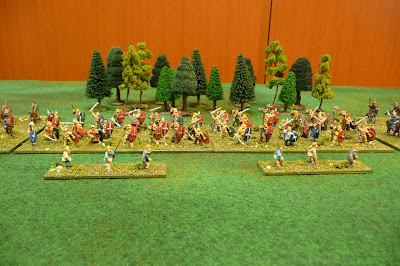 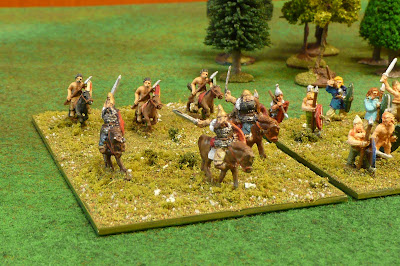 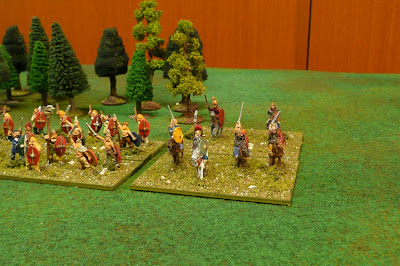 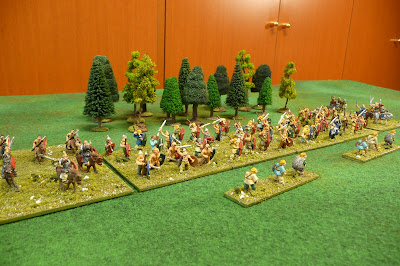 The lot of 'em.
There are twelve cavalry, six light infantry and forty-eight warriors all told, making up seven bases of warriors, a base of gaesati (or however you spell it!), three bases of  heavy cavalry, a base of light cavalry and two bases of skirmishers.  Hopefully they will prove adequate for the tasks that may await them!
Posted by Prufrock at 12:15 PM