Slow progress with the Roman cavalry

I've made unexpectedly slow progress with the Roman cavalry this last week.  I'd expected to knock them off in a couple of days, but I've been using a different system from usual and haven't really clicked with it.  For various reasons it has been taking a lot longer than I thought - with some false steps along the way to compound the problem.

Still, we're getting there, so I thought I'd post progress shots in an attempt to motivate myself to finish them off...

Again, the figures are Strategia e Tattica.  I don't like their cavalry as much as I do their infantry so far, although I'll reserve final judgement on that score until the figures are done. 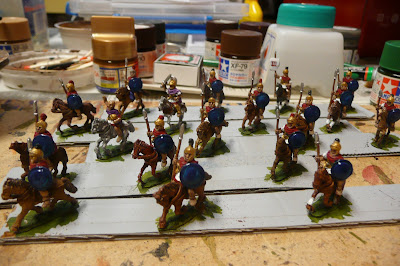 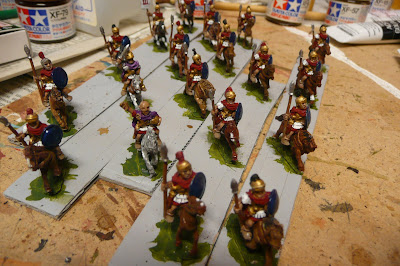 They still need highlights for the cloaks, tunics and tack, a wash for the horses, a flesh highlight, with a touch up here and there to follow for a few little things.  Scipio (in the middle) needs some special treatment, so he is not as close to completion as the others.

Once the painting itself is done, there will be the usual two coats of Future/Klear, and the matt varnish.

I will be heaving a sigh of relief when these chaps are finally done!
Posted by Prufrock at 9:12 AM