What follows is a a pictorial view of the Bagradas set up for Lost Battles. I had intended to play through the full game, but the kids have been a bit restless with colds the last week so I had to call it quits two turns in.

There are two significant features about this episode from my perspective. The first is to try out a 'new' old table in the hobby room. My regular adjustable table has been requisitioned, so I grabbed the shin-high one to have a go with. It fits my game board very well, but it is rather low to the ground, and as a consequence the lighting is not so good. I wanted to take a few photos and see how the lighting compared to that on the previous table. You can see the results below.

The second significant thing is that the turns here were spent testing a slightly different turn structure for Lost Battles, wherein players alternate actions on the board rather than taking their full turn and completing all their actions before having their opponent do the same, as the rules in the book describe. I wanted to see whether it was near enough to a feasible approach, and if not, what would need to be worked on to make it so.

So, to the pictures: first up, from the Roman left centre. 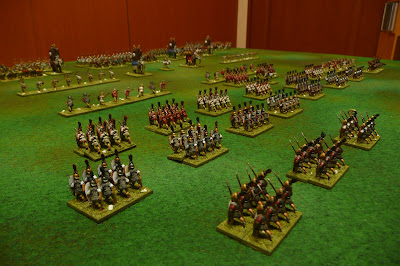 Second, from the Carthaginian right centre. Xanthippus can be seen placed perilously between two of the elephant units. 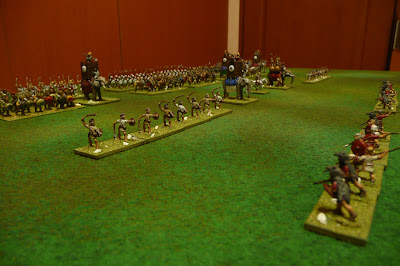 Third, a close up of the Roman centre at the end of turn two, with the centres already in contact. 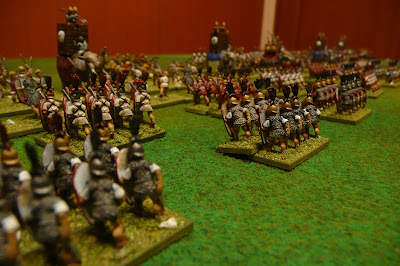 Fourth, a slightly longer shot of the same. 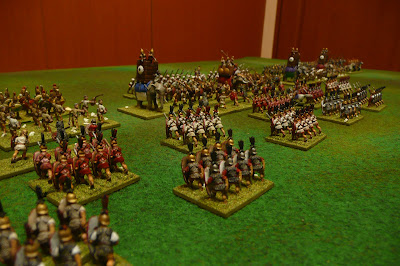 Fifth, an overview of the battlefield as it was with 'out of the book' deployment. Note that I do not use zone markers, as I already have a fair idea of the dimensions of each zone on this table and prefer to keep the field as uncluttered as possible. 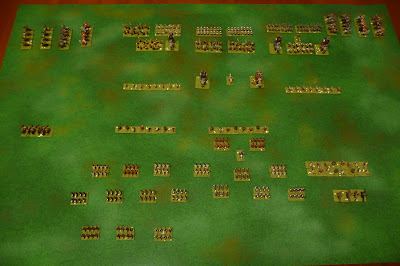 Well, that's all I have time for at present. What do you think of the photographs? Are they too dark?
Posted by Prufrock at 9:45 AM