My miniatures gaming mate in Osaka, Luke, is coming down this Sunday for a day's gaming. We're going to do some DBA in an effort to give him some preparation for a competition he will be attending next year. Sadly, I'm not much chop at DBA, but I hope he enjoys carving me up!

The other thing we're going to do is (gulp) give Field of Glory another try. We tried it once not long after it came out, but it wasn't a very successful day.

So, with some gaming to be done, I checked the FoG army lists and realised that it would be handy to have some Tarantine light cavalry and some horse archers around, just in case the Seleucids make it onto the table. Therefore, and despite the heat making painting conditions less than ideal, I've been working on a few more horsemen over the last couple of days.

Here is a shot from the rear of the Tarantines, with the figures being Chariot 15s, purchased from Magister Militum in the UK. They still need to be given a spray of Tamiya matt finish to get rid of that nasty gloss look, and they also need their bases painted and flocked, but apart from that they're pretty much done: 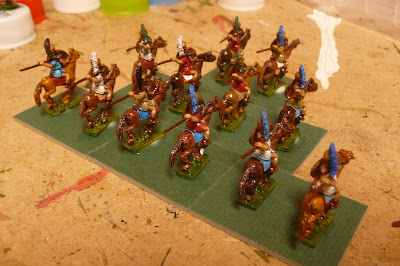 Here's another look from the front. I tried free-handing the shields, using Luke Ueda-Sarson's excellent resource pages as a guide for patterns, which can be found at this link:

Some of the shields look all right, but others are a bit cringeworthy. I may revisit these sometime in the future if they still set my teeth on edge next time I see them. 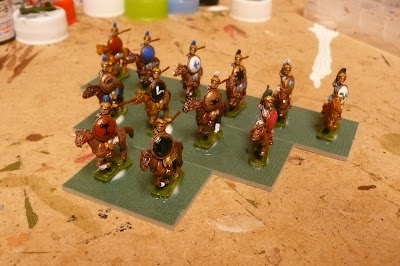 Well, there we have it. There is plenty more to post, what with some good rugby on the telly of late, and piles of Essex DBA armies, books and whatnot arriving in the mail, but these will all have to wait for another day.