In preparation for a C&C:A tournament game I recently set up and played through the Edessa scenario from the 4th Expansion, Imperial Rome. I have no figures suitable for that era, so transposed it back in time to Hispania, c. 210BC, with Sharpur's Sassanids masquerading as Carthaginians and Polybian Romans filling in for Valerian's men. Here are a couple of shots of the board prior to the battle, first looking from the Roman side: 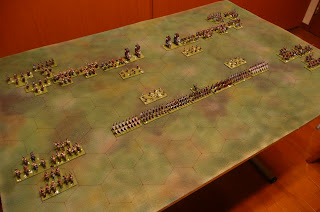 And second looking smack down the middle. The shots were a bit limited, but my gaming/painting/storage room is embarrassingly cluttered, so I tried to avoid getting unnecessary muck in the shots! 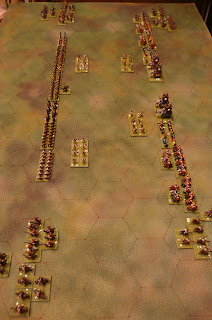 And a third from closer in, showing the nasty array of cavalry facing the Roman left: 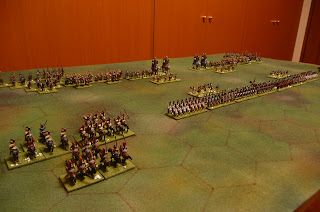 The Romans don't have much going for them in this scenario. They have only four cards against six and one leader against two; they are outclassed in cavalry and their heavy infantry units are opposed by elephants and subject to the 'Fright at First Sight' rule which makes said jumbos even more fearsome than usual. Good fun for the masochists :)
Posted by Prufrock at 8:04 PM