This is a report on the second refight of Pharsalus that John and I undertook using Phil Sabin's Lost Battles rules. We swapped sides and this time it was John's turn to play Caesar. As with the first battle, we used the historical deployments and played by email over VASSAL.

The action begins in turn two (turn one being taken up with deployment). Pompey orders Labienus in with the cavalry, and they score two hits on the Roman veterans. The light infantry move up to provide Labienus with more staying power, but half of the cavalry remains in reserve. A general advance is ordered in the central zones (see screenshot below). 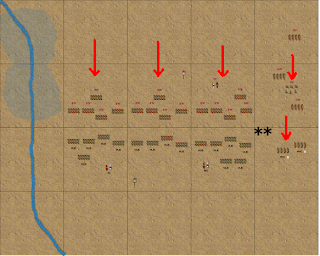 Caesar responds by taking his 'flip-flop' (the ability to take two moves one after another to reflect his brilliance as a general). He himself leads two units of legionaries to the right flank to reinforce the cavalry, and in the central zones attacks are undertaken with only moderate success. 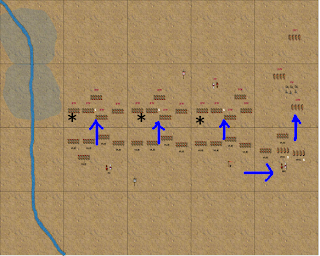 Pompey is encouraged by the Caesarians' slow start, and hopes to cause some early damage. Casualties are equal in the central zones, but Labienus scores another success on the left. 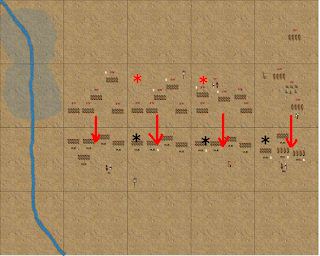 Caesar responds with purpose, inspiring his troops on the right to inflict three hits on Labienus' zone. Labienus elects to have the light infantry take the brunt of the attack, trusting that his cavalry will hold a little longer. Unfortunately for him, as the light infantry shatter, they carry one of the cavalry units off in rout. The Pompeian left is now in disarray!

In the central zones, the attacks are vigorous and the Pompeians begin to waver. Only Anthony fails to damage the enemy. 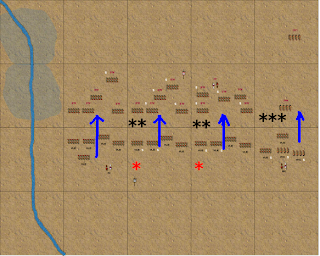 The Pompeian response is aggressive, with a strong attack from the left that weakens progressively as the assault moves along the line. All the Caesarians in the rightmost two zones are now spent, so any hits there will result in shatters. The obverse of the coin is that the units in Pompey's zone are also all spent, so it will be up to him to rally any hits. 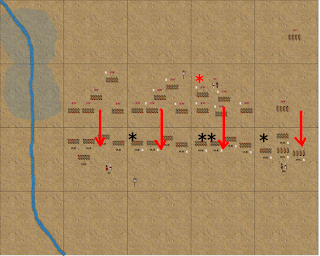 After turn four the position favours Caesar slightly, as he has the next attack; yet a poor series of rolls on turn five would present Pompey with an opportunity to inflict some real damage on the Caesarian right and right-centre. The situation is becoming tense!

Note on tactics: The decision during turn 4 to allow the Pompeian light infantry to take two of the three hits scored on Pompey's left flank and shatter instead of spread the hits amongst all the units in the zone was a calculated risk. There was a one in three chance that the spent cavalry unit would run off in the morale test necessitated by the shatter, but I felt that having a fresh cavalry unit to lead off with on the following turn was worth the risk, given that we only needed two hits to shatter one of the opposing units. Unfortunately, the spent cavalry unit did run off, and what could have been a daring move became a foolish one!