I thought I'd post something a bit different here and invite some reader participation. To give some background, I have been playing in an online C&C:A tournament for the last few months. On Sunday I was involved in a match with a chap who'd thrashed me 5 banners to 1 in the first leg. The second leg saw us switch sides and play again, with the player scoring most banners overall going through to final of the competition.

The scenario was 1st Bedriacum, 69AD from the 4th Expansion. I was controlling the Othonians while my opponent controlled the Vitellians. I had these cards in my hand: 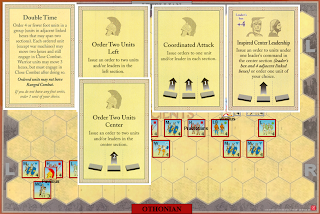 The next screenshot shows the board position after two cards had been played. Bear in mind these special rules: the Praetorian unit hits on helmets and can ignore one flag rolled against it, and the Julian legions rule is in force. This means that medium and heavy infantry units can move two hexes and not battle, or move one hex and battle. MI and HI are also missile capable, but they only get to roll one die, and only if they hold or move only one hex. So here's the board (at last): 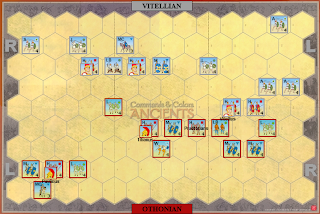 The next play was mine. My opponent's hand was six cards. Assuming standard section and leadership cards in his hand (ie, no first strike, no clash of shields, no I am Spartacus), how would you play the Othonians in order to win 5-0 in as few turns as possible? In your explanation, be as general or as specific as you'd like.
EDIT - here is a link to the post containing a report on what actually happened. Many thanks to all those who've read and contributed to this!
http://prufrockian-gleanings.blogspot.com/2010/03/commands-colors-ancients-teaser-result.html
Posted by Prufrock at 3:19 PM

Email ThisBlogThis!Share to TwitterShare to FacebookShare to Pinterest
Labels: commands and colors, teaser