These are the first two turns of a refight of Pharsalus that John and I are playing over VASSAL. Although Lost Battles gives players the option of deploying as they wish, we are again using the historical deployments for this game. Pharsalus is an interesting battle and the Lost Battles scenario presents both players with some difficult choices. Pompey has numerical superiority in both foot and mounted but his forces do not have the veteran status of Caesar's men. This is a mixed blessing for Caesar: his veterans are tough, manoeuvrable, and easy to inspire in combat, but their value is such that he can't afford to expose them to too much danger. The judgement Caesar must make is how much danger is too much. Pompey must use this disparity in quality to inflict unacceptably high losses on Caesar's troops.

We pick up the action in turn two. Pompey, Labienus and company are at the top of the screen; Caesar, Antony and their veterans are at the bottom.

Turn two sees Pompey launch an attack with the cavalry on his left. Labienus (who is not shown on the board due to his relative anonymity that day) and his men hope to sweep away Caesar's veteran horse, but they can only inflict one hit. In the central zone Pompey advances a portion of his foot, leaving the other zones refused (see screenshot below) to prevent Caesar getting the first attack in all down the line. 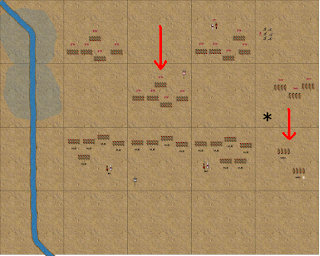 Caesar responds by moving two units of his veteran foot and himself to the right in support of the cavalry while Antony marches forward to confront the Pompeian left next turn. In the centre the veteran legionaries close and inflict 3 hits on the Pompeians at a cost of one to themselves. 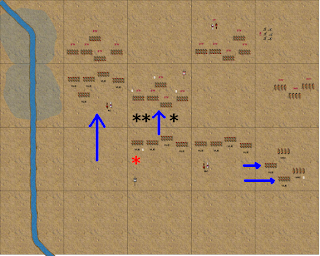 Turn three sees Caesar exercise his prerogative as a brilliant general and reverse the turn order. This allows him to attack with the troops moved adjacent to enemy zones last turn, but does not permit him to attack from the same zone twice in a row. The centre therefore sits quiet, but Antony lands a heavy blow - 4 hits to 1 against - on the left. On the right the cavalry, inspired by Caesar's presence, inflict a devastating (and scarcely believable!) 6 hits, shattering all three of Pompey's cavalry units and clearing the space for an advance. All that stands between Caesar and the rear of Pompey's army is a unit of light infantry. 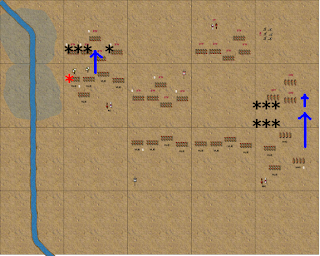 With his hand forced, Pompey elects to advance left of centre. On the right his men attack for one hit; in the centre it is stalemate. 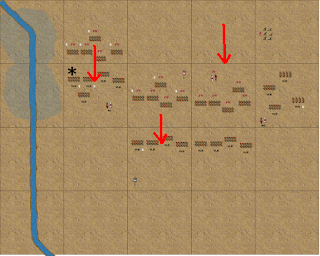 Will Caesar's luck hold? Will Pompey's bold advance pay off? It remains to be seen in part 2!