So, here we are back again with part 3 of our VASSAL game of Pharsalus. The battle is at a critical stage: Caesar's men have begun taking casualties and in two zones they have no fresh units left at all. They need to make a quick kill or else the Pompeians may manage to do enough damage to take the honours.

So, we return for Caesar's phase in turn 6.

Caesar concentrates on Pompey's rear guard. The veteran cavalry men attack with full bonuses, but cannot break through. Caesar turns his legionaries to attack the Pompeian flank, but they too are entirely ineffective. Antony again falls upon the Pompeian right, and again fails to do any damage. One almost begins to wonder about his motivation... In the centre a hit is scored, shattering one, but the rout does not become general. Then on the right-centre, a ferocious attack is launched, scoring three hits and shattering one unit of the Pompeian legionaries. This is a crucial attack, as it has taken Pompey's strongest sector and best hope for victory and almost wrecked it (see screenshot below). It is not over yet though - Pompey still has a turn or two to summon something. Three shatters ought to be enough if it can be managed. If... 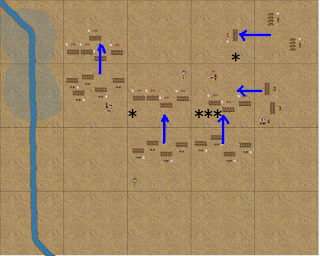 Pompey has nine army commands to play with, and he must use them wisely. He allocates one to the ALE in the rear for their attack against the cavalry. A hit here would inspire the entire army - but it does not come. Hearts sinking, Pompey launches his attack. Any hits he makes in this zone will cause Caesar's units to begin shattering, but again no hits result. The centre is also unsuccessful. Finally a hit is scored on the right, but the zone has fresh units, so it does not do significant damage. The gods have not favoured Pompeius the Mild (as he was ruefully dubbed). 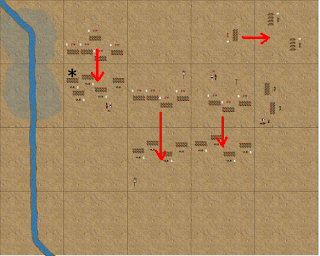 Caesar, as is his custom, pounces at the appropriate time. He rolls six commands, giving him enough points for combat bonuses all over the field. The veteran cavalry finally overwhelm the gallant rearguard, and now Pompey's zone has enemies in three adjacent areas. The army survives the morale check caused by the shatter, but Caesar now drives in from the right and scores a double hit. Pompey attempts to rally the troops, but they have had enough. The remaining unit flees, and Pompey must go with it. The rest of the army staggers, but holds its ground. Antony, perhaps realising that it would be a poor look to miss this chance, finally attacks with gusto, and also scores a double hit. At this, the entire army melts away, giving Caesar the victory. 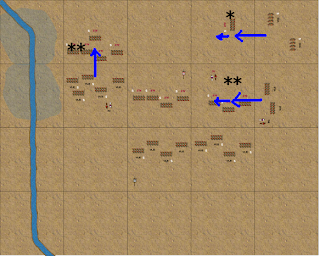 The final victory points were 78 to Pompey, 102 to Caesar, giving Caesar a narrow victory. Pompey was very close here. Some decent dice would have made all the difference. For Caesar, after a lull in the middle stages of the battle, the quality of his veterans came though.
Great game!