Last night I played through another Thapsus (46 BC) refight, this time a 'Caesar Incapacitated' scenario (check the bottom of this post if you want to see scenario details, troop numbers, etc), which follows Plutarch's report that there was a suggestion Caesar that had taken a turn before the battle, and that this had rendered him unable to command the army.

Command duties have therefore been assumed by Caesar's staff. Both sides are surprised. This means that the armies start undeployed and can bring on to the table a maximum of four units per turn, with elephants and heavy infantry counting as two units on the first turn.

Action begins with Metellus Scipio's men in the process of building a camp. Guarding its construction is a screen of elephants, light infantry, and Numidian light horse.

Caesar's men advance with light infantry and veteran legionaries to clear the way for an assault on the half-completed fortification. 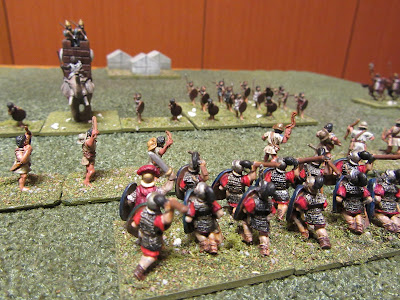 Seeing that an attack is underway, Scipio hastily musters more elephants and legionaries to support his forward troops. Caesarian legionaries arrive on the scene en masse. 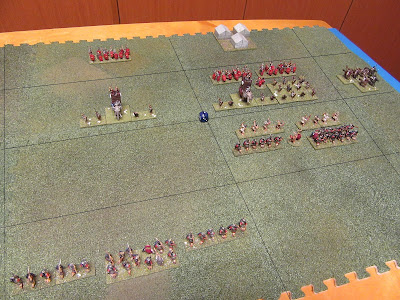 Scipio shores up the centre and brings up more cavalry reinforcements for his left. The Caesarian slingers drive off the elephants and light infantry and the legates continue forming the legionaries into line. 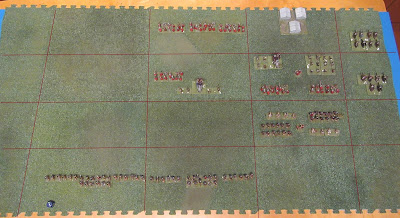 Scipio brings on his right wing, pushes the centre forward, and advances his light cavalry into contact on the left. The Caesarians advance forward on their left and on the right bring up the cavalry to counter the Numidian horse. 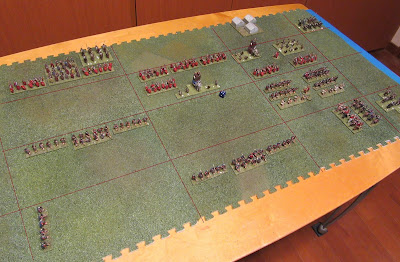 The cavalry charges cause casualties on both sides, but the Numidian light horse break first. Although the Caesarians advance on the left, a command mix up means the centre is left behind. 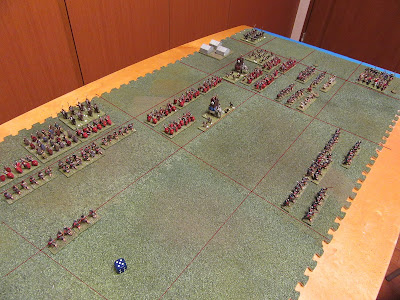 Scipio's centre takes advantage of the communication breakdown to hit the inside flank of the Caesarian left. The elephants cause tremendous damage.

The Caesarian centre does advance this time, but the left is under extreme pressure. 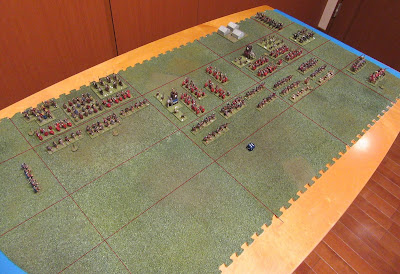 The elephants continue their attack on the Caesarian left, forcing the veteran legionaries to retreat after having taken 50% casualties. On the other wing the cavalry fight continues. The horse of both sides are shaken, but the Optimates are able to feed fresh cavalry into the fight. 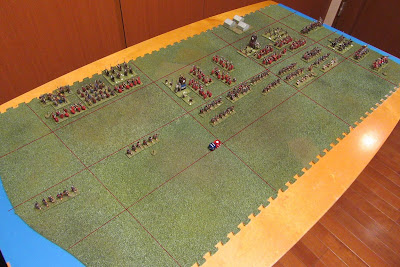 
The fresh reinforcements tell, and Scipio's heavy cavalry routs Caesar's Gauls and Spanish. Everywhere Caesar's line is under pressure. Again the elephants do awful damage to the Caesarian legionaries, this time in the centre. 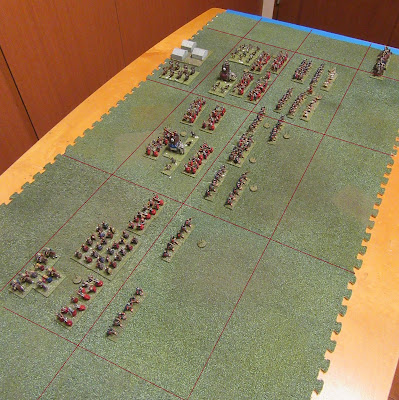 
The elephant attacks again prove unstoppable and with half of the Caesarian army gone, their right flank defeated and enemy cavalry in their rear, the Caesarians flee in an effort to make it back to the safety of their camp. 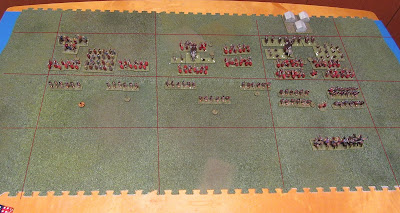 And Caesar's absence is decisive: Metellus Scipio has won an incredible victory by 115 points to 36. An absolute humiliation for Caesar. His men are in a terrible way and if Scipio and Juba follow up as they should, it is probably the end of Caesar's African campaign.

This scenario did not turn out at all as the battle is attested to have in The African War, but it did make for a tense and interesting battle. Caesarian command rolls were abysmal, and this allied with a very strong performance from Scipio's elephants and cavalry just blew the Caesarians away.


The second Thapsus scenario is 'Caesar incapacitated' and mixes Plutarch's report that Caesar may have had a medical incident prior to the battle with Cassius Dio's hasty attack scenario.

The battlefield is oriented roughly west/east with Scipio coming from the west (top of the board) and Caesar from the east.

Ground scale is 600m per zone. The flank zones on both sides of the battlefield are treated as coastline (sea to the north; inland salt lake/lagoon to the south). There is a fortified camp in Scipio's left rear zone.

Scipio's key zone is left centre (in front of the camp). Caesar's is currently right centre, but I'm not 100% settled on this.

The attack limit is 3.

Both armies are surprised.