I've been putting together an article and orders of battle for a Thapsus (46BC) scenario recently. Since it's only a playtest I'm using very condensed depth so that I can fit the zones (yes, zones: it's for Lost Battles, of course...) on my little table.

In this one Caesar won the battle but lost the game due to the fact that his old nemesis, Titus Labienus, got around one flank and managed to do just enough damage to put the victory points in the Pompeians' favour, 100 points to 91.

The Pompeians held out until the very last turn, too: even after a flank has been turned, the camp has been lost and the commander in chief has run away, legions are tough.

As a little aside, you'd think that Roman Civil War battles would be dead boring given that they almost always feature the same troop types, that Caesar always has the advantage with his genius for command and his veteran troops, and that everyone knows the battles, etc., but in Lost Battles they are not boring at all. One of the key reasons is that Phil Sabin has a lovely little rule (at first you think it's just an annoying mathematical anomaly) regarding legionary victory points that makes average legionary vs veteran legionary match-ups very tense in big-picture terms.

If you read Caesar you see how careful he is with his men. He doesn't want to lose them, put them in situations which might affect their confidence, or fight if their morale is suspect. He wants everything in his favour (how he goes about ensuring that things are in his favour is of course one of the joys of reading Caesar!), and that little rule in Lost Battles gets the Caesarian player feeling much the same way.

Anyway here are a couple of snaps. This one shows the situation after turn two. I've drawn in the zone lines using MS Paint so that it's easier to see who and what is where. 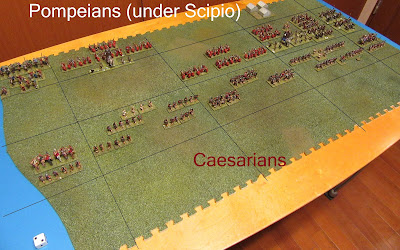 In the historical battle Caesar's men rushed Scipio's left flank, panicked the elephants and the Numidian cavalry, and then rolled up the Pompeian line. As you can see in this photo, the attack on the left flank is the main focus at this stage of the battle. 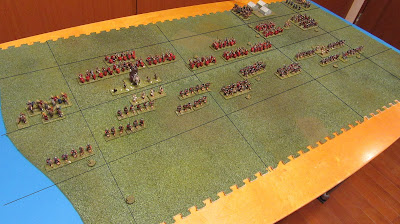 This next shot shows the battle at just before the halfway stage. The Pompeian left is still resisting, but the camp is under attack and is about to fall. Labienus is putting genuine pressure on the Caesarian left, and has shattered one of the veteran cavalry units. This success was telling in game terms. 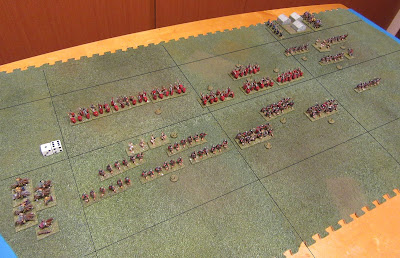 In this last picture we see the later stages of the battle. The Caesarians have broken Scipio's left, taken the camp, and forced Scipio himself to flee the field. The Pompeian legions are holding, and with Labienus now attacking the Caesarian flank they are doing some damage. But the Caesarians have superior quality and position and, as they did historically, they will go on to roll up the flank and win the day.

So there we go. A successful test and an entertaining battle to engage with. Thanks for reading!