Following on from our first game of To the Strongest on April 1st, we made an early start next morning so that we could get another battle done before Luke was due back in Osaka (Luke's report can be found here).

Simon Miller has said that Romans vs Gauls was a good match up under the rules, so that's what we decided to play. This time Luke took the Romans, generously allowing me the chance to squeeze into some tight trousers and don a checked cloak. 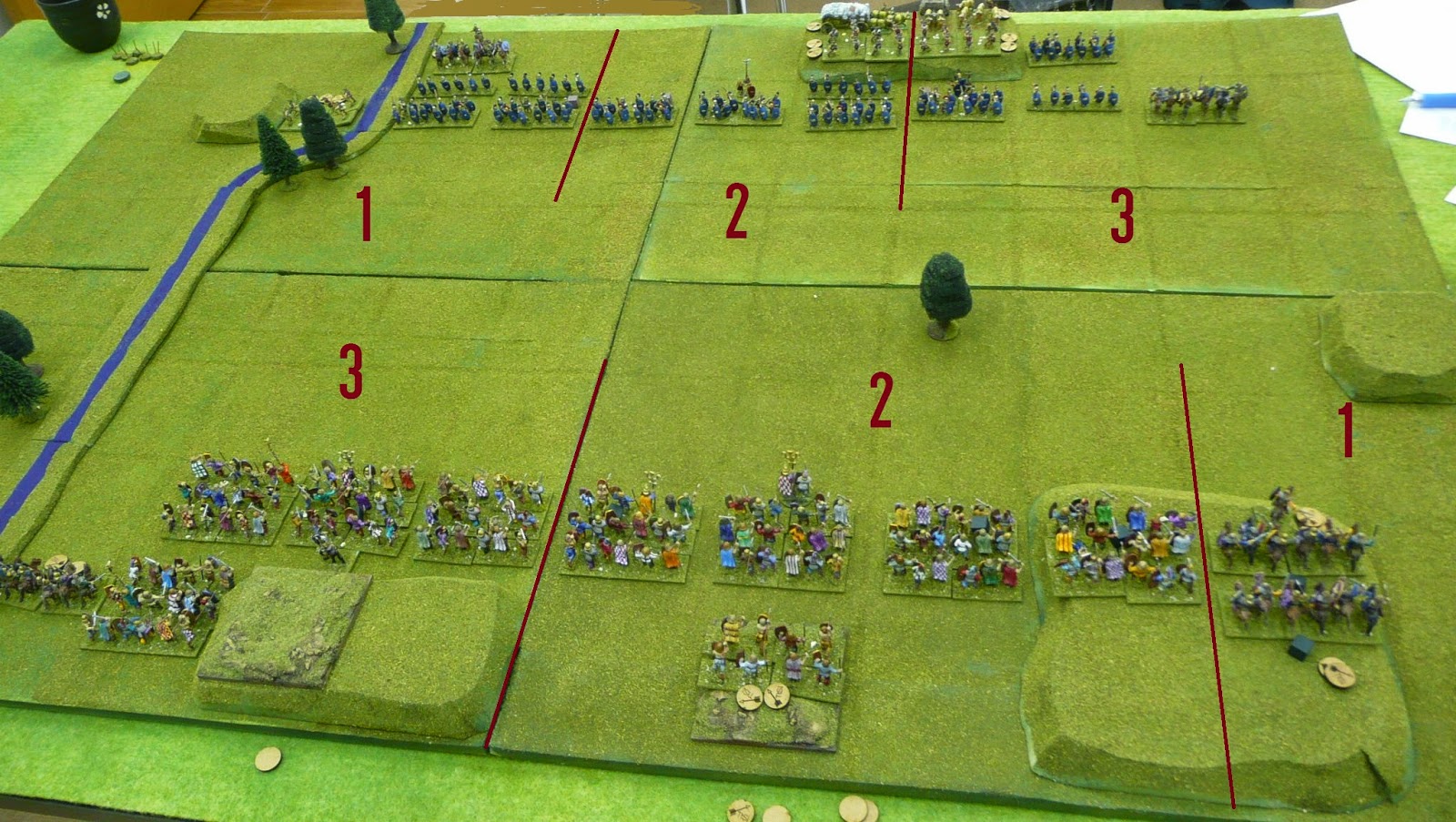 Luke won the initiative and pushed forward on all fronts. He had gone for a mixture of medium-sized legionary units supported by veteran small units. I enrolled eight bands of warriors and went for cavalry, hoping again to gain ascendancy on one flank and use my deep units to burst through where I could. I enlisted six heroes to lend weight to my attacks; Luke grabbed four. 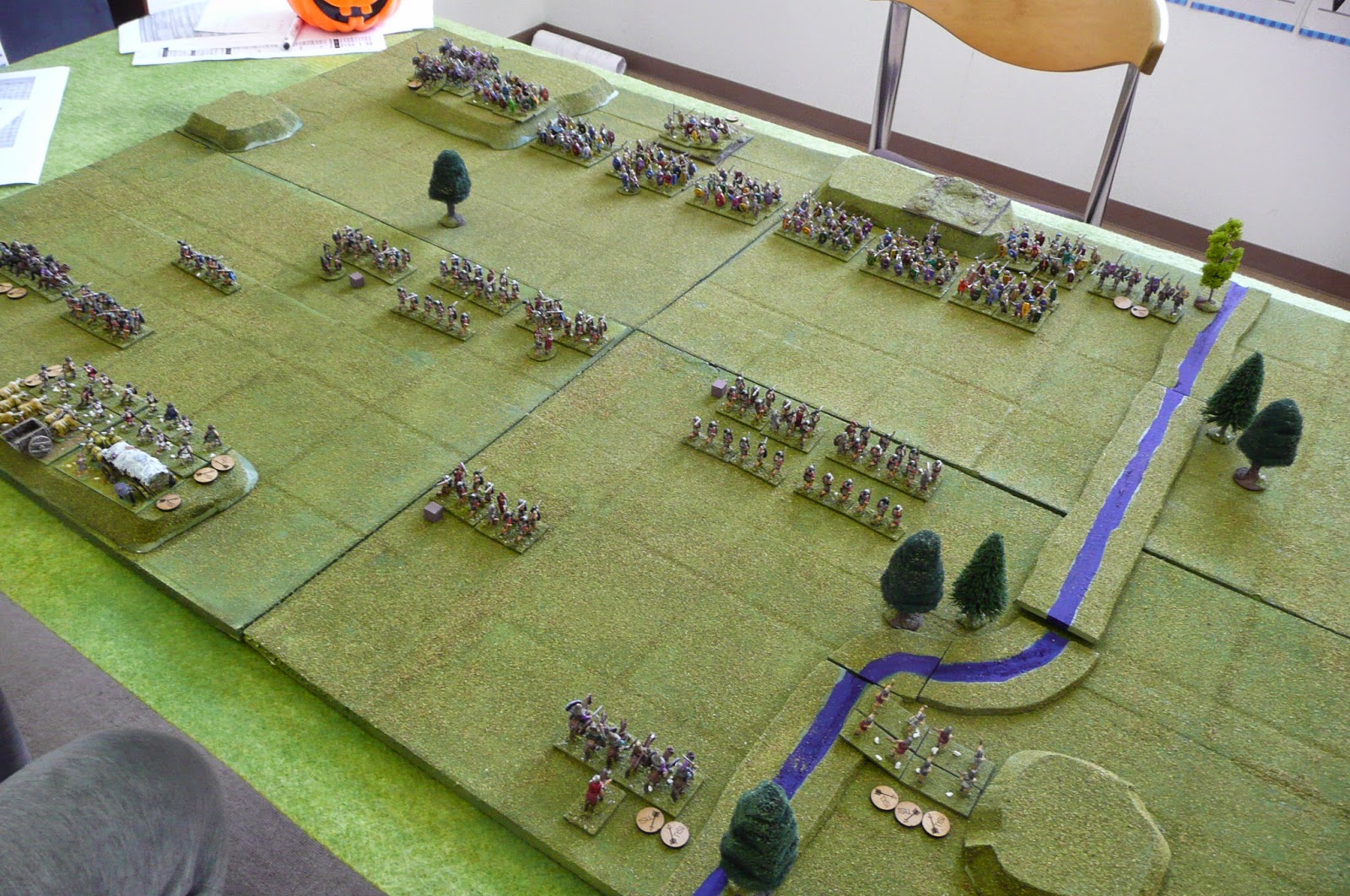 My cavalry command was a bit slow to get moving, but elsewhere we were able to present a satisfyingly solid front to the dastardly Romans and their tricky commander. 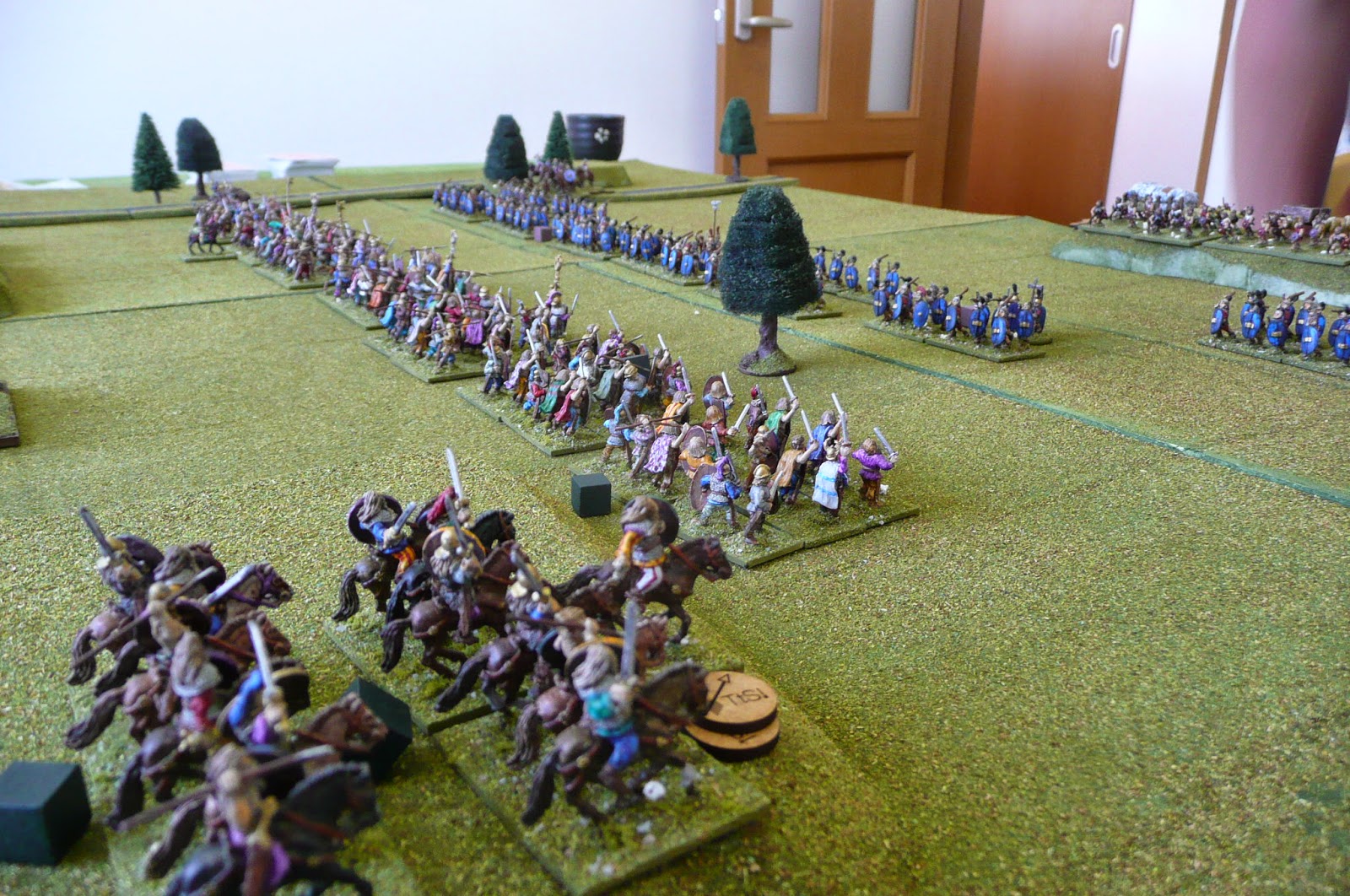 The lines soon came into contact and battle was joined. Annoyingly for both of us, we kept forgetting to use our heroes to re-roll early missed attacks. I need to get some figures to use for the wee champions - little coloured blocks are clearly not obvious enough for our aging eyes!

On the right we had some marvellous success: our cavalry stole a march on their Roman opposites, attacking from both the flank and the front.

Unfortunately for us, the cavalry missed their next five attacks (and yes, I forgot to use my hero for two of them!), Luke got some veteran legionaries over as cover (a la Caesar at Pharsalus) and we began to take casualties.

In the infantry clash the legionaries began to wear us down with their combination of standard and small sized units. Under Luke's sure hand they were able to rally hits on the larger units and exchange lines to protect weaker/damaged units and or deliver a second attack (I thought line exchange worked really well here).

For us, we were unable to rally any hits successfully, and things were beginning to look a little shaky.


Luke effected a first breakthrough on the left of the Gallic line, but we were able to immediately plug the gap by bringing forward our reserve.

With the Roman cavalry threatening to outflank us via the stream, the cavalry on our left fired off a few desperate javelin volleys. Incredibly, both hit, and the turncoats (Aedui, no doubt...) broke! Thus inspired, the infantry redoubled their efforts (ie, we gave up trying to rally hits and just went all out on the attack), and the Roman line - thinner in the centre than at its ends - began, for the first time, to show signs of weakness.

But the situation on our right was now desperate as the legionaries stormed through there as well. With no reserve left, it was up to the warriors of our main line to make up for it, and they did, bursting through the Roman centre themselves.

With the battle entirely in the balance, both sides needed three victory medals to win. In practice, the Romans had to destroy one unit of warband or the cavalry and leader (in photo below) still trying to finish off the cavalry on the Roman left.

For the Gauls, victory would require the destruction of two standard units (cavalry or legion) or a standard unit and a small unit (veteran legion).

We held a slight advantage in that it was our turn, and we could choose where to strike, but we also knew that it had to be won right now: we could not survive the next Roman attack.

Accordingly, we decided to attack first on our left, needing one hit to defeat the legion there, and then to try our luck on the right again, hoping our cavalry could finally score the hit they needed to break their enemy.

Would it be victory or death? 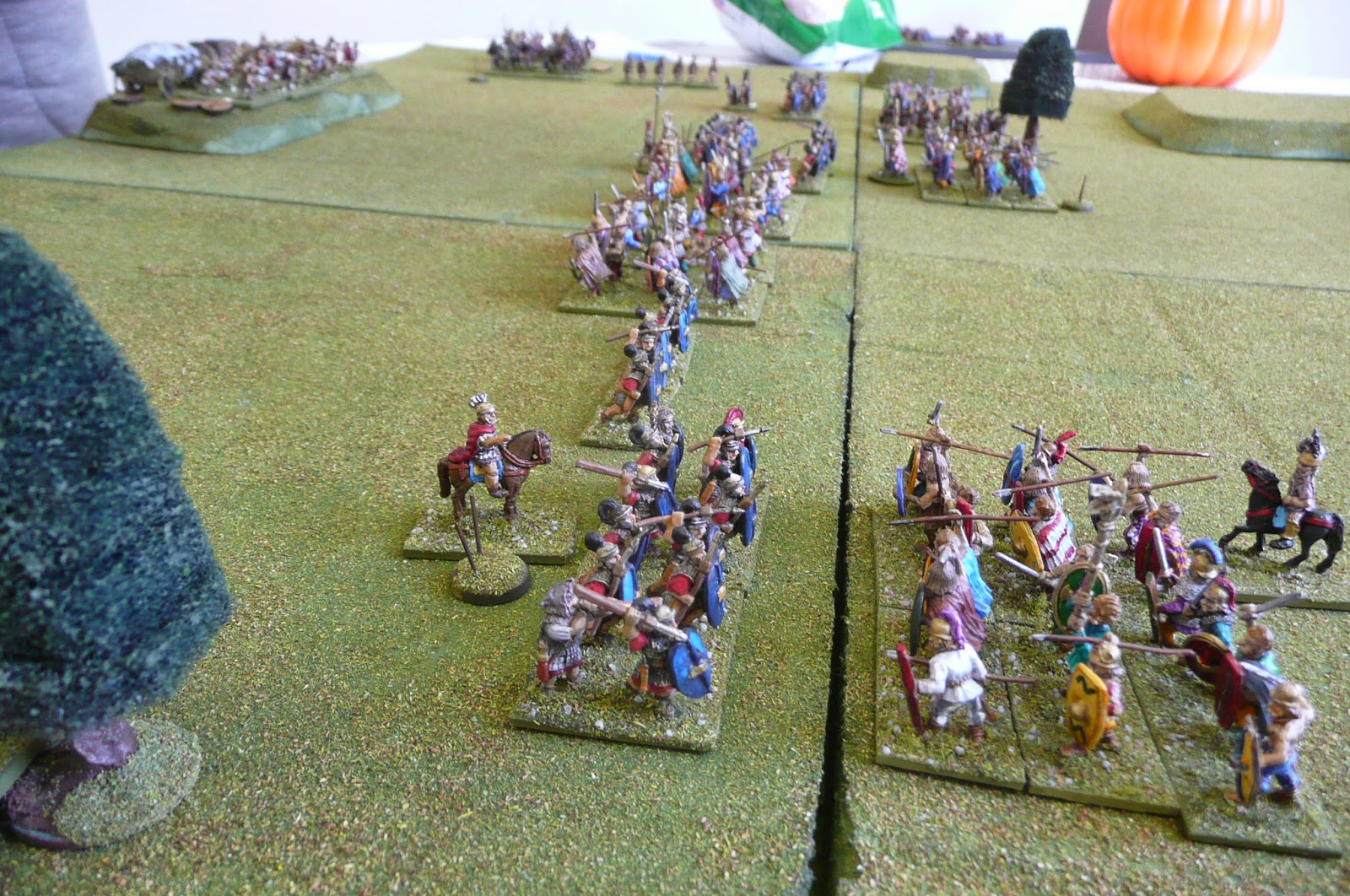 The attack was launched on our left, but we could not land the hit.

Then the Romans battle back and break us!


And so ended a tense and thrilling game.

Everything in the rules worked very well here. There were ups and downs for both sides, and while the Romans held the edge, the Gauls came back strongly and almost snatched a victory against the odds.

Luke played a very strong game, I thought. He used the army well mixing standard and small units in double line, and some quick thinking (and steady nerves) saved the breakthrough on his left from becoming a rout. To be honest, we were lucky to come back into the reckoning; but you have to take your luck when you can get it in this game.

Once again we came away thinking that Simon Miller has really got something good going with To the Strongest! It will be interesting to see where he takes things from here.

Thanks for reading, and hope you enjoyed the reports.

Email ThisBlogThis!Share to TwitterShare to FacebookShare to Pinterest
Labels: after action reports, ancients, miniatures, To the Strongest!