Here's a bit of a follow up to an earlier post inspired by the very talented  Monty, who blogs at 'Twin Cities Gamer', on experimenting with priming troops in a useful undercoat shade.

To recap, I'm painting up thorakitai (who I will also use as eastern levied Roman legionaries when needed) and went with a spray-primed brown - rather than my usual gray or white - as the base colour.

First step post priming was to colour the armour with dark iron and dry brush with silver (figures are Old Glory 15s, for reference).

Next I blocked in the base coats for the tunics (cream here) and the helmet plumes (a darkish red). Other figures in the unit use different colours, but I'm showing this one lot for consistency.

Next up was flesh (a mixture of peach and raw umber) and then the greening of the bases.

After this the scabbards and the baldricks were done and the helmets gone over with bronze and a Devlan Mud wash.

Spear shafts were tidied up, shields drybrushed with both a base and a highlight, and the helmet plumes highlighted. The shields shown here are a muted brown, but others are done in purples, reds, yellows and greens.

It's now time for the finishing touches: spears are tipped with old silver and highlights are applied to tunics.

The lot is given a wash of Klear and Devlan Mud on the shields, tunics and flesh areas. 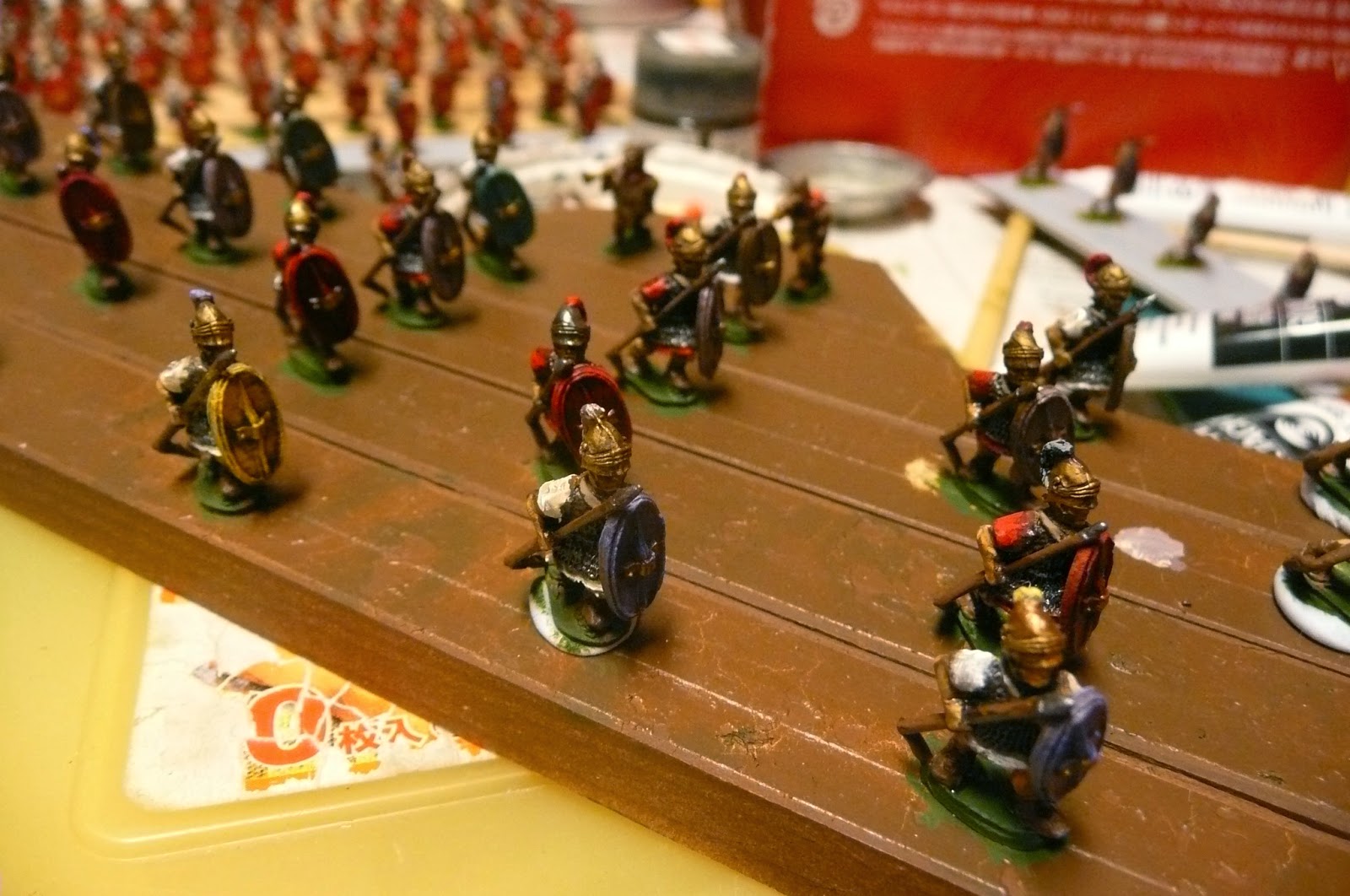 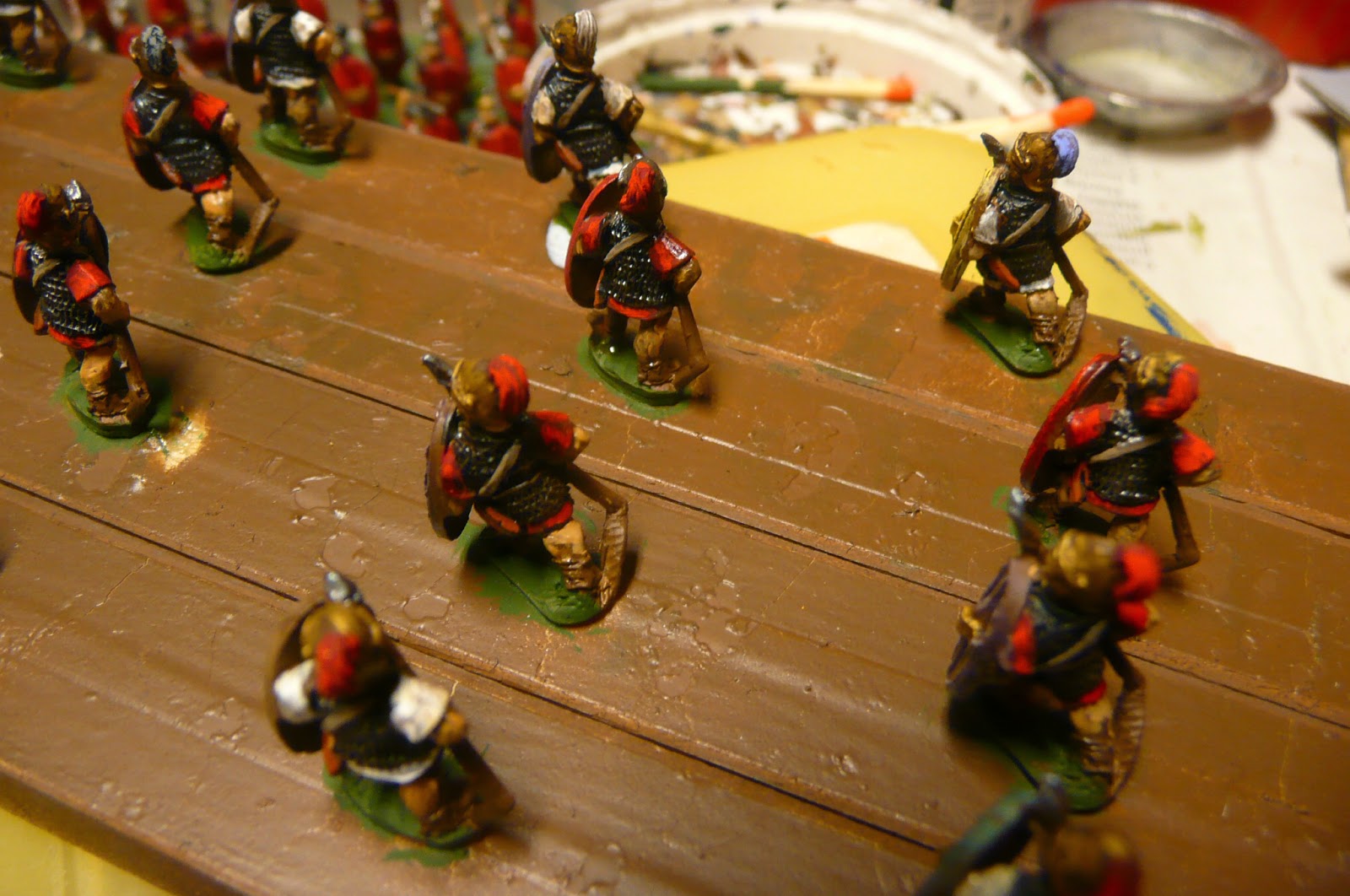 As a last step the spear support struts are cut off and the figures put onto their bases. A final coat of Klear and matt varnish will follow prior to flocking. 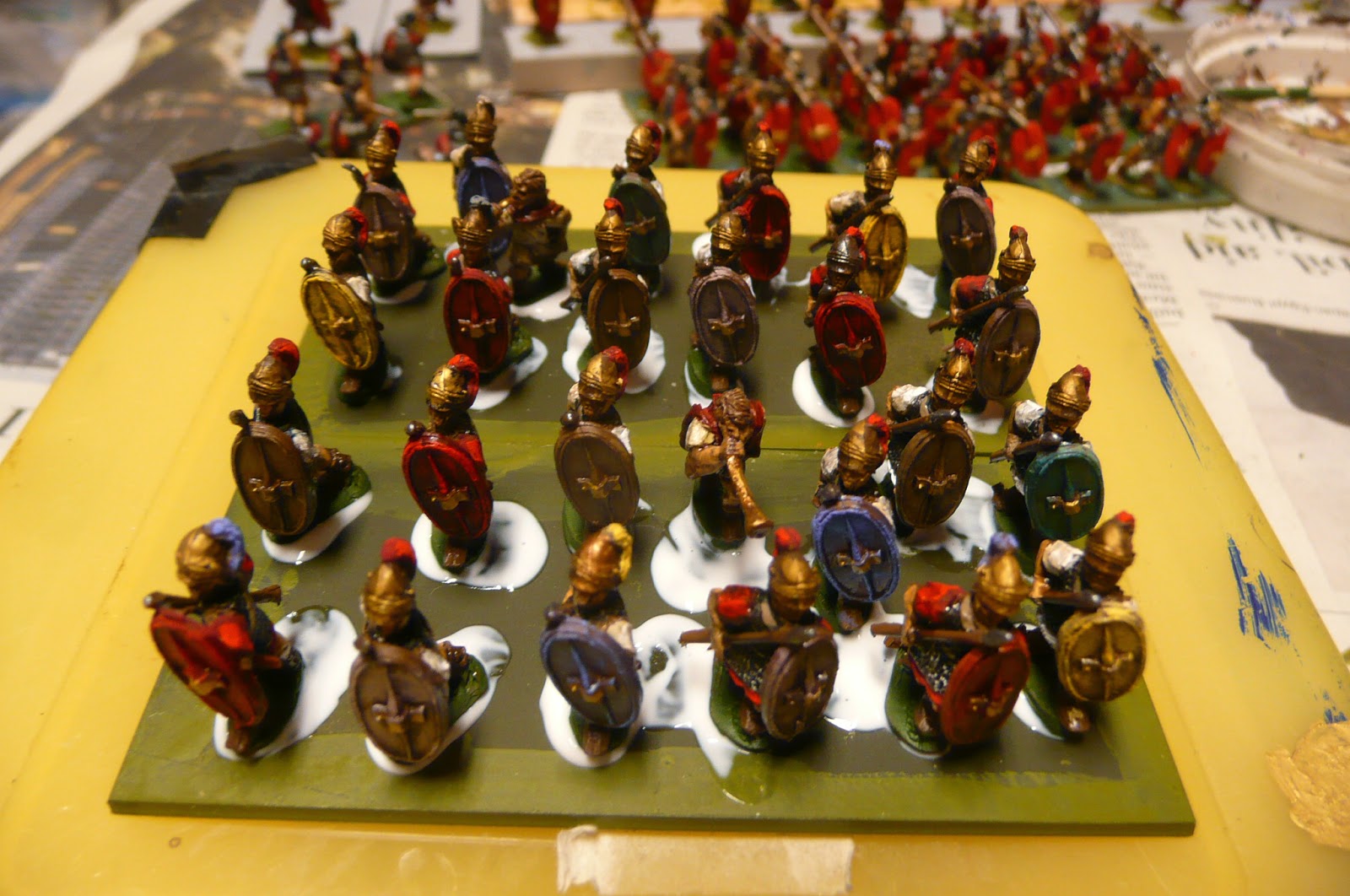 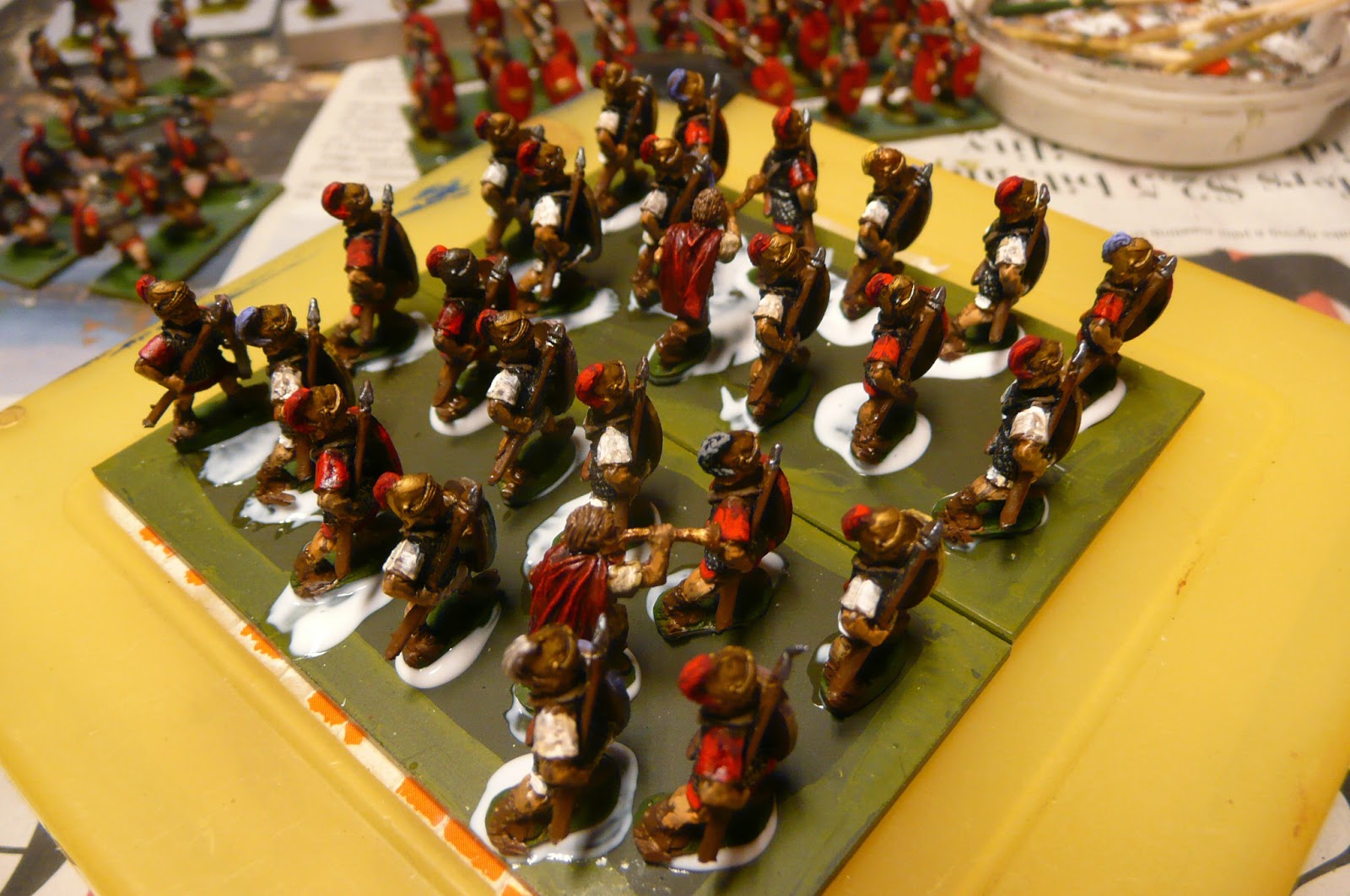 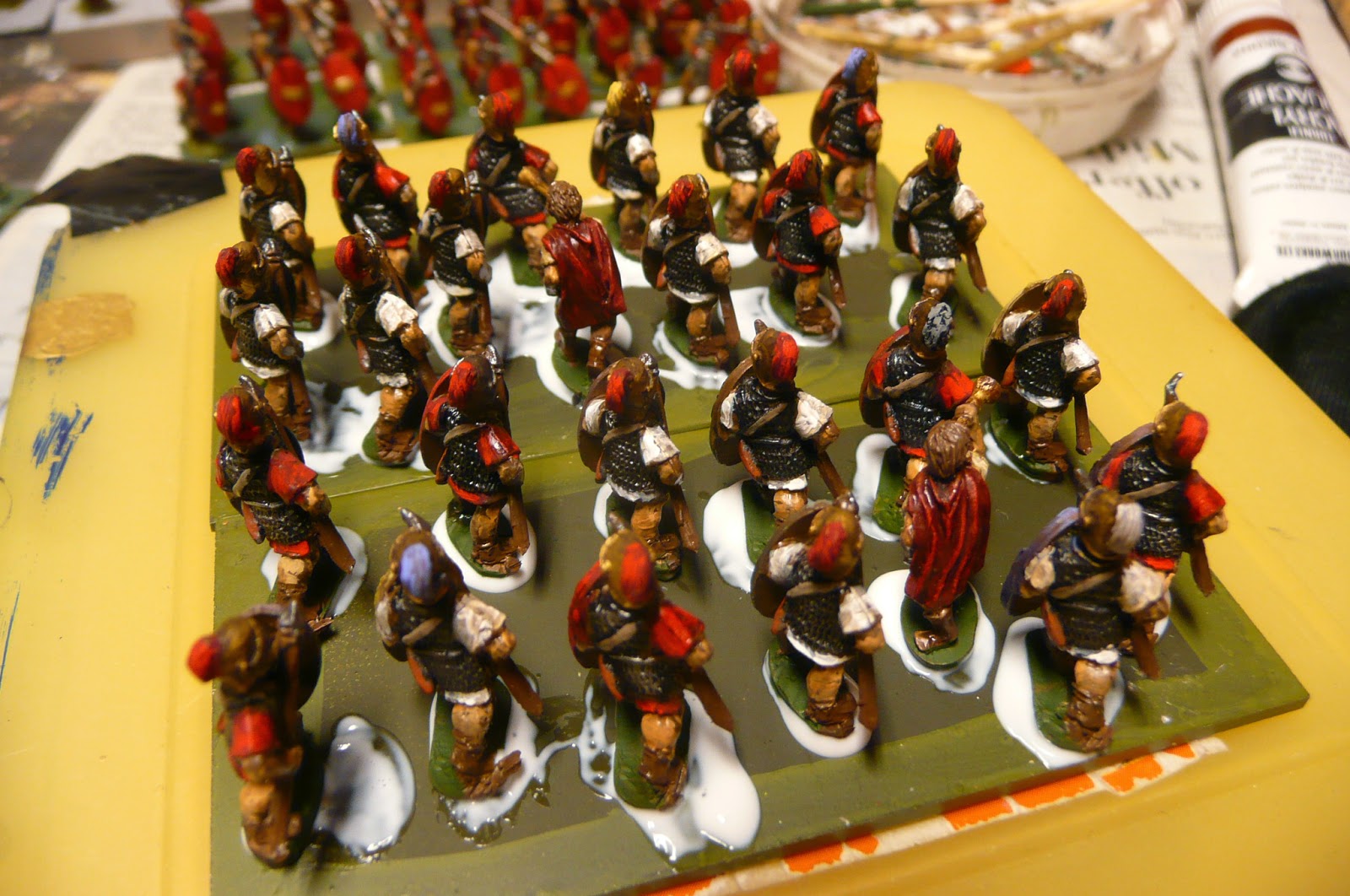 Well, I do like the results. I don't know if I saved a huge amount of time with this batch because there was a bit of trial and error - especially with the metallic areas - that I haven't shown in the write up. The key for me (as a very limited painter) is to pick a couple of things to emphasise and try to make them pop with highlights. I chose plumes and tunics for this bunch, and I reckon they came out all right. Another important thing for me is to think about the overall effect. I'm not sure that I got the shields quite right in this respect, but the predominantly white tunics and predominantly red helmet plumes will hopefully do enough to unify the lot as a group.

I was worried over the first wee while that they were looking a bit boring, but once the washes did their job and the highlights were on I was converted; so thoroughly in fact that I quickly sprayed up my next batch of figures in brown before the sun set!

Thanks to Monty for the example, and while I've a fair way to go to match his mastery of the technique I hope to use this method a few more times yet.