I was lucky enough to be able to take advantage of GMT Games' recent 50% off sale and, having watched a few documentaries on the Royal Marines in Afghanistan, thought I'd like to try a game from the COIN series just to see what the system is like (and what the fuss is about).  A Distant Plain was sold out, so I went for Labyrinth: The War on Terror, 2001-? as it seemed to be in the same ball park.

To be fair and open, historical moderns is not really my thing. I enjoy hypothetical Cold-War-goes-hot stuff, but actual recent or ongoing conflicts feel raw to me and I find it a little uncomfortable thinking about gaming them.

It was therefore with slight wariness that I approached Labyrinth, which takes as its subject the post-9/11 war on terrorism. Please keep this in mind while reading this review.

Anyway, let's take a look at the game itself.

The first thing you notice is that it is played on a beautiful, hard-mounted map. The featured countries are classed as either Muslim or non-Muslim, and they are tracked differently depending upon which category they fall into. Muslim countries have governance (Islamic rule, poor, fair or good) and stance vis-a-vis the US (ally, neutral or adversary) noted, while non-Muslim countries have a counter for posture (hard/soft), indicating whether or not they support the use of force against extremism.

Countries may also harbour terrorist cells, US troops, or a combination of the two.

To win the game the US must keep its prestige high and use 'war of ideas' plays to ensure good governance in Muslim states. The Jihadist player must try to keep funding levels high, reduce US prestige - and therefore its ability to influence other nations - and look to foment Islamic rule in Muslim states or set off a WMD in the US itself.

The game revolves around card play, with each card being able to be used as an event or as an operations play. Sometimes, if the card is an enemy event, you might have to play it as both an operation for you and an event for the enemy, so how best to use the cards dominates decision-making.

US operations options include 'war of ideas' in which the US gets, under certain conditions, to roll to improve the governance or stance of a Muslim country.  The lower US prestige, and the greater the difference between US posture (hard/soft) and the posture of the rest of the non-Muslim world, the smaller the chance of this roll succeeding.

The US may also attempt a 'war of ideas' operation to get a non-Muslim country to change its posture from hard to soft, or vice versa.  Again, this depends on a die roll.

The US may opt to use an operations turn to disrupt terrorist cells, foil a terrorist plot, or deploy troops. Troops can generally only be deployed to allied Muslim nations, but the US does have a game-changer option: regime change, whereby the US may order regime change against any country under Islamic rule. This immediately changes the governance of the country to poor ally and brings a significant troop commitment while the US attempts, over time, to end Jihadist resistance and bring the governance level up to good.

The US player has a sort of firefighter role - he or she must look to keep prestige high, maintain alliances, disrupt terrorist cells, use force where needed, promote good governance in Muslim nations, uncover plots and, above all, prevent a WMD attack on US soil.

Naturally enough, the Jihadist player also has a number of options. These include being able to recruit terrorist cells in certain areas, send cells to other nations, set up plots and use either of two different types of jihad to disrupt governance in Muslim countries in an attempt to bring these states closer to or under Islamic rule.

The US is powerful, but can't do everything at once, so the Jihadist player must try to stretch the US as much as possible, lower its prestige, and make it difficult to respond to every threat.

The game also includes solitaire rules (a key feature for me - most of my play is solo), which see the Jihadist side played by an automated system. Apparently there are plans to bring out rules to automate the US side which will be made available through a future edition of GMT Games's house magazine, C3i.

We've been talking so far about operations, but as one of the prime uses of cards is for events, I'd better mention them as well. In fact, it's with these events that things get really interesting (and tricky). There are 120 event cards, and over a turn each player must use the eight or nine cards in his or her hand judiciously. Some events are more useful than others at certain times, or require conditions to be right, or are at their best used before or after the play of other particular events. Learning the card deck is probably the most important thing if you want to become a competitive player of these types of games.


Now, in most card-driven games, this is where things start to get less appealing for me. I don't really want to have to learn a card deck and associated optimal plays to be able to do all right in a game. If I want to play cards, I'll play a traditional card game. But the way that Labyrinth approaches card play seems fresh and does not result in the sense of frustration that I've had with some other games in the genre. I've been happy just to play through the cards as they come, hand by hand, and haven't felt that I'm missing anything on a macro level by not knowing optimal plays.

That said, I'm still ambivalent about the game itself. As I said before, I'm not very comfortable with modern conflicts - especially ongoing ones - and that is a major difficulty for me. It's nothing I didn't know already however, so I'm not going to hold that against the game.

I find that the game mechanisms are clever, but the treatment (necessarily, of course) is at times simplistic and does not go into deeper causes or ramifications, and therefore any understanding that may be generated is, to me, undercut by the feeling that the game is presented from the US side of the divide. As a way to understand a US narrative of an approach to fighting extremism it may be a reasonable approximation, but as a way to come to grips with the wider nuances I think it is of less value.

As an example, we have the Predator card: 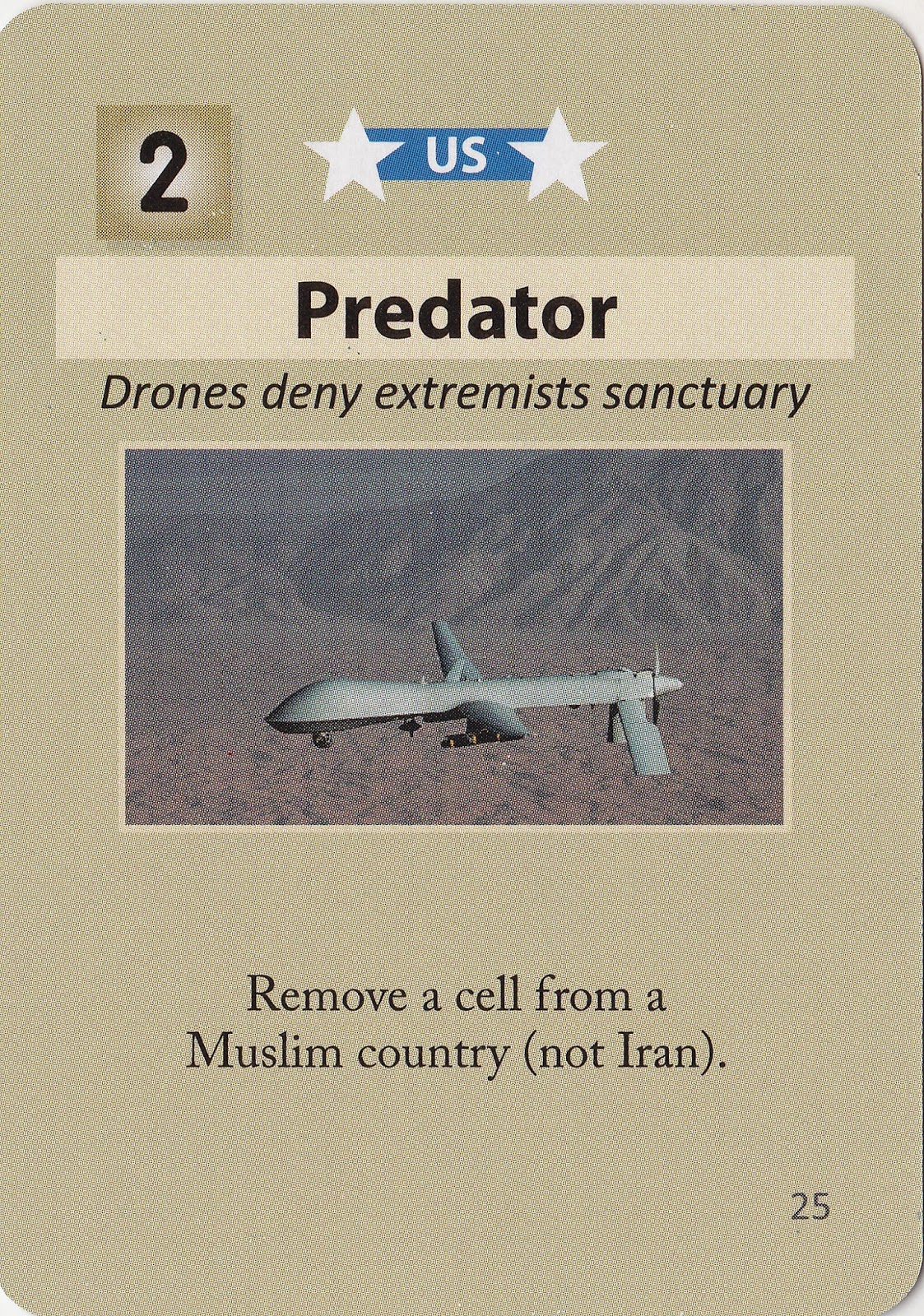 This is a positive card for the US if played as an event. However, what it does not show is the anecdotal real-world negative effect that the use of drones has on perceptions of US moral authority and is one example of how the game misses the double-edged nature of much of the goings on in the war against extremism.  That it misses this is due I think to a) it being designed within a particular paradigm, b) us finding that the real world has outgrown the game, and c) the unavoidable imperative to simplify things to fit within a playable game system.

So, points in favour: it's challenging; it has asymmetrical sides; there is plenty of room for player skill; and it is beautifully produced. Points not in favour: the simplifications reduce the value it might have in terms of understanding the conflict; it attempts to quantify a lot of unknowns, some of which have been or will inevitably be overtaken by events; and there is a sense that it is not distanced enough from its subject to be able to see causes, events, and results entirely objectively, even though the intent to be objective is there.

In conclusion I would say that it is an attractive introduction to modern card-driven game systems, has historical interest as a snapshot of 2011 US insider thinking around the war on Islamic extremism, and is likely to prove to be very interesting as a game. But if you are looking for a definitive treatment of this murky ongoing conflict you will have to wait a bit longer.