Useful readings on the Hannibalic War

I'm doing a spot of research at the moment and have been giving the Second Punic War collection a bit of a time off the shelf.  This is a list of what I've been using.

Please feel free to comment, and extra points are yours to command if you add in your own favourite sources for this period! 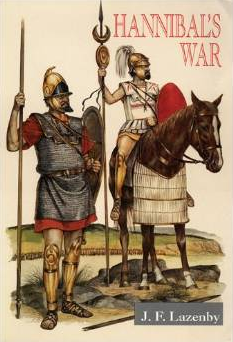 Hannibal's War by J.F. Lazenby.  Excellent overview.  Gives his sources and is not controversial.  As far as I'm concerned is still the starting point for all investigations.

The War With Hannibal by Titus Livius.  An excerpt from Livy's history.  Essential, along with Polybius.

A History of the Roman World by H.H. Scullard.  Good source looking at the wider context. Not as in- depth for this period as Lazenby, but worth checking to see what he has to say.

Roman Warfare by Adrian Goldsworthy.  General coverage of the Roman approach to war.  Summarises rather than presents.  Has decent suggestions for further reading.

The Fall of Carthage by Adrian Goldsworthy.  A good single book history of the three wars against Carthage.  Very readable and includes copious notes.  This and Lazenby are the two books most focussed on the Hannibalic period.

In the Name of Rome by Adrian Goldsworthy.  Again, another readable book from Goldsworthy.  Gives military biographies of quintessential Roman generals.  Includes Fabius, Marcellus and Scipio Africanus from our period.

Cavalry Operations in the Ancient World by Robert E. Gaebel.  A very interesting look at the development of cavalry warfare.  Not especially necessary for the Second Punic War however.

Warfare in Antiquity by Hans Delbruck.  Dated but still formidable.  Spends a lot of his time savaging contemporaries and pointing out flaws or inconsistencies in the ancient evidence.  Still, worth referencing as a strong, opinionated and perhaps instructive voice.

Armies of the Macedonian and Punic Wars by Duncan Head (drawings by Ian Heath).  The ancient wargamer's bible.

Soldiers and Ghosts by J.E. Lendon.  Quite an unusual treatment.  Contends that warfare in a Greek and Roman context was an emulation of heroic myth or legend and an embodiment of cultural attitudes.  I don't agree with everything he says but it's a brilliant and imaginative re-interpretation.  Again, not essential reading as far as the Hannibalic period goes, but not off-topic either.

Lost Battles by Philip Sabin.  Gives good overviews of the main clashes including troop numbers, terrain, and general course of the fighting.  Also touches on some of the scholarly debates around the battles themselves.

I've been using some online sources as well - Polybius especially (and wikipedia when I'm cheating) - but it's nice to have hard copies in front of you. So much time is spent on a computer these days it's almost relaxing to go back to pen and paper for a spell!

Anyway, that's me done.  Feel free to comment and add to the list.  It's always good to be introduced to new books on this topic and on ancient warfare in general.