"It's the Helvetii, Gaius Julius!" 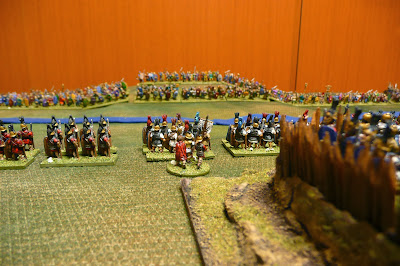 In 58 BC, while shadowing the Helvetii, a migrating Gallic tribe supposedly menacing Roman allies and territory, Caesar took  a detour towards the town of Bibracte to stock up on food supplies.  Hearing of this from deserters, the Helvetii decided to launch a surprise attack.  In the words of the man himself (from the first book of his Gallic War):

The Helvetii, either because they thought that the Romans, struck with terror, were retreating from them . . . or because they flattered themselves that [the Romans] might be cut off from the provisions, altering their plan and changing their route, began to pursue, and to annoy our men in the rear. (1.23)

[Caesar]  drew up on the middle of the hill a triple line of his four veteran legions . . . he placed above him on the very summit the two legions which he had lately levied in Hither Gaul, and all the auxiliaries; and he ordered that the whole mountain should be covered with men, and that meanwhile the baggage should be brought together into one place, and the position be protected by those who were posted in the upper line. The Helvetii having followed with all their wagons, collected their baggage into one place: they themselves, after having repulsed our cavalry and formed a phalanx, advanced up to our front line in very close order. (1.24)

In Lost Battles, the Gauls get the first move.  My plan was to have them advance as quickly as they could in an effort to rush the Roman position on the hills.  It didn't look impossible, but Caesar's trump card was having five late-arriving units off-table (shown here in camp) which he could bring on to reinforce the line where reinforcement was most needed. 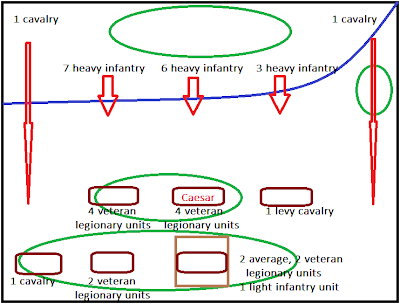 So much for the preliminaries; let's now go to the battle itself.

It begins as the Gauls advance their infantry line into and across the river. 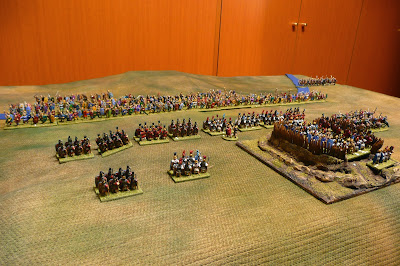 They attack Caesar's left with the veteran cavalry (it's actually illegal to attack up hill when charging from distance, but I forgot that in the heat of the moment). 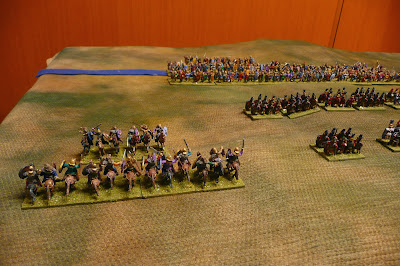 In the Roman turn Caesar brings two units of legionaries and the light infantry in on the right of the hill, recalling the levy cavalry into position behind them. 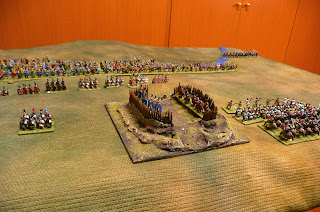 The Roman attacks are effective: the cavalry defend the hill line and the veteran infantry fire off their pila to decent effect (4 hits are scored).

His soldiers hurling their javelins from the higher ground easily broke the enemy's phalanx. (1.25) 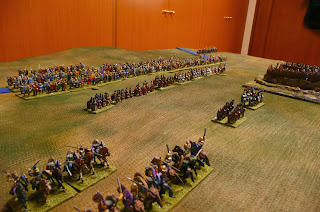 On their turn the Gauls are finding it difficult to coordinate their attacks (lack of command points due to a low command die roll), but they attack up the hill (an all-out attack succeeds, which hits both the attacker and the defender) and move the cavalry on the left into line. 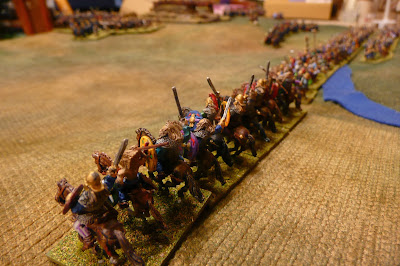 They do not have the ability yet to advance on the Roman right. 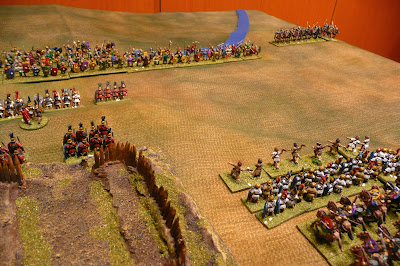 The Romans attack downhill again, with more success.  They shatter the Gallic cavalry assaulting their left and continue to do damage to the infantry line (3 more hits are scored).

The Gallic left advances against the Romans on the right of the hill. 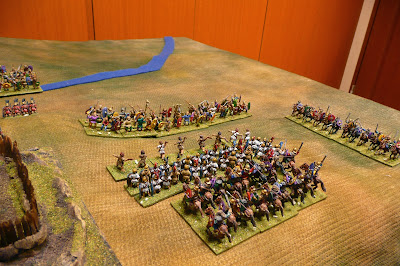 In the centre the tribesmen start to put some pressure back on the legionaries as the Roman first line tires (3 hits). 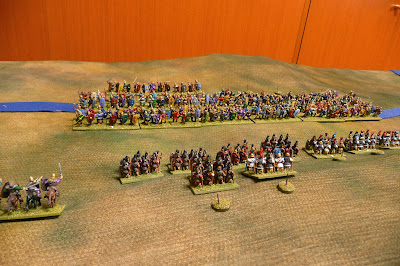 The Roman second lines come into action with devastating effect. The Gallic line holds, but only just.  The centre is now completely spent (7 hits).

[The Romans] made a charge on them with drawn swords.  It was a great hindrance to the Gauls in fighting that, when several of their bucklers had been by one stroke of the pila pierced through and pinned fast together, as the point of the iron had bent itself, they could neither pluck it out, nor, with their left hand entangled, fight with sufficient ease; so that many, after having tossed their arm about, chose rather to cast away the buckler from their hand, and to fight with their person unprotected. (1.25)

The Roman cavalry - actually allied Gauls - are now in position behind the Gallic centre-right, which is not good for morale, and obstructs any Gallic withdrawal to the hill in the rear.

The Romans are again beginning to tire, but they have more fresh  reserves to call on than the Gauls do at this point (2 hits from the Gauls). 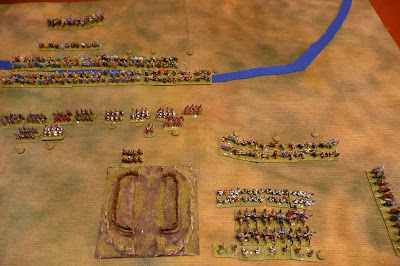 The Romans shatter an infantry unit now, but the rest of the line stands firm (2 hits).

With time running out, the Gauls make one more supreme effort to break the Roman will.  Concerted attacks knock the breath out the legionaries but their experience keeps them from folding under the pressure (4 hits).

At Caesar's command the Romans seize the initiative: a grinding push in the centre shatters two units and panic spreads (a double hit causes two shatters and this is followed by a morale roll of 1). 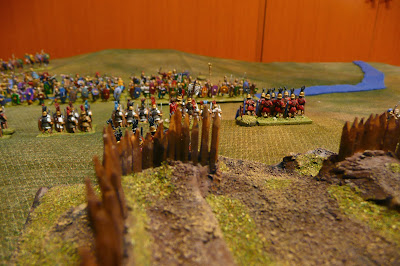 The Gallic left holds on for a little longer, but once the situation elsewhere becomes apparent it also breaks. The cavalry get clean away, but the infantry are not so fortunate.

The battle is over, and Caesar has won an important victory!

The refight followed the general course of Caesar's description fairly closely, up to where the Helvetii retreat to the hill on their side of the field and up which the Romans pursue them. Of course, due to the Roman cavalry in the Gallic rear the Gauls never got a chance to withdraw in the refight.  If they had been able to do so it might have been a different result.

The result is still tight, but the Romans have done enough to ensure the victory.

The Gauls may do better by retreating back to the hill and drawing the Romans forward into the disadvantageous river sections.  Of course, they can't do that with unprotected flanks, so the cavalry on the right has to be better used or, failing that, more successful with its dice rolling.

It was a good fight, and some subtle tweaks to strategy here and there are crying out to be tested.  I was also quite pleased - after recent painting efforts - to be able to field a Gallic army :)  I'm looking forward to using it again.