When looked at from a tactical point of view, the battle of Ilipa was arguably Scipio Africanus' most brilliant field victory, for in it he outwitted and comprehensively defeated a larger force under the wily and experienced Hasdrubal Gisgo.  The embroidery on the saddle cloth was that the victory and its aftermath dealt the decisive blow to Carthage's Iberian aspirations, and with it her access to the kind of manpower needed to win the war.

In the days before the battle the two armies camped near each other.  With Hasdrubal's camp on an eminence, each day Scipio would watch the Carthaginian deploy his army for battle, seeing that the formidable African infantry - 24,000 strong - would form up in the centre and the Iberian allies rank up to the left and right of them.  In front of the Iberians went the elephants and the supporting light infantry while to the wings were sent the cavalry: Numidians on one side; Iberians on the other.

Each day Scipio would deploy his army in a mirrored fashion.  In the centre he would place his own best foot: 16,000 legionaries; Romans and Italians.  To the left and right of the legions he put his 16,000 allied heavy infantry from the Spanish tribes.  On the flanks he would deploy his cavalry, some 3000 all told, and in front of the main line his skirmishers.

Things continued like this for several days, and it seemed both sides were content to allow the other to make the first move.

But appearances were deceiving; for - unsurprisingly - Scipio had hatched a plan.

One morning he put it into practice.  After giving his troops an early breakfast, he deployed the army at sun up, sending out his cavalry and light infantry to harass the enemy.  Hasdrubal hurriedly gave his own order to deploy, and his troops did so smartly enough, in their usual fashion, but without time for food.  The skirmish actions were intentionally elongated, and the empty stomachs on the Punic side of the field began to tell.

At some point it must have became apparent to Hasdrubal that Scipio had not done things quite as expected.  He had in fact reversed the deployment of his infantry, putting his weaker troops - the Spanish allies - into the centre, and moving his veteran legionaries out to the wings.  Both sides now pitted strength against weakness, so Hasdrubal was perhaps not too concerned, but he had reckoned without the other ace that Scipio had up his sleeve.

When he felt the time was right, Scipio recalled the skirmishers and sent his legions forward in column to execute a series of what must have seemed baffling manoeuvres.  Eventually, and perhaps too late, Hasdrubal saw the legions form into their lines of battle against each end of his line.  Scipio's cavalry and light infantry, having presumably chased off the enemy cavalry, fell upon the flanks of the Spanish foot and the line began to tighten under the pressure.  In the centre, the Carthaginian veterans were fixed in place by Scipio's Spanish, whose advance had been outpaced by that of the legions.  The Spanish did not close quickly enough to expose themselves to prolonged danger, but nor did they allow room for the Africans to move to the support of the men on their wings.

The Carthaginian line fell back towards the hill at their rear, eventually breaking for the camp as the pressure told.  Although Hasdrubal's army was spared total annihilation by a sudden downpour, Scipio knew how to follow up a victory, and a few days later the 6000 remaining troops surrendered, exhausted, waterless and leaderless.

Carthage had lost Iberia and with it the war.

In Lost Battles, the action takes place on a featureless plain, as the hill which contained Hasdrubal's camp is considered to be off-board (it was not this way in the Strategos II precursor scenario, however).

*I actually made a mistake here - while juggling fatherly responsibilities during set up I missed a unit of light infantry on the Carthaginian side.  But by my own lights I mistakenly rated Hasdrubal an average commander, so it made no difference to the fighting value of the two sides, nor indeed to the outcome at all.  Still, I thought I should mention it in case there were some eagle-eyed observers wondering where the Balearic slingers are!

Hasdrubal deploys first, but because Scipio is a brilliant general he gets to move twice in a row, which allows him to replicate the manoeuvre made against the ends of the Carthaginian line.

Here we have the situation at deployment, looking from behind the Roman left (the blue lines indicate the Lost Battles zones). 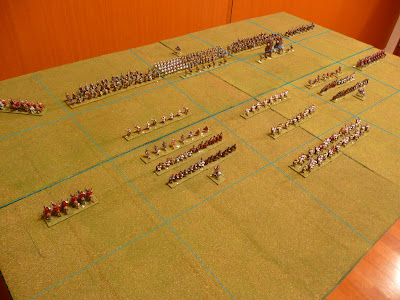 Scipio begins by advancing the cavalry on both flanks, attacking with his infantry, and bringing the Spanish forward in the centre.  He has mixed success: he hits the Numidians on the Roman right, but misses on the left.  Silanus has no luck against the light infantry in the Carthaginian right centre, but his commander on the other wing shatters the elephant unit and advances into the space vacated, ensuring that the Spanish enemy there are confronted early. 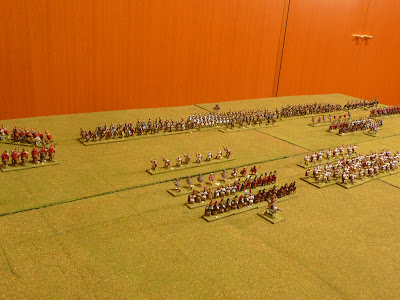 The Carthaginians attack on both flanks with their cavalry, scoring a single hit on one side and a double hit on the other.  As a double hit would shatter the veteran cavalry receiving it, Rome plays the "Favour of the Gods" chit and forces a re-roll.  The second roll is also successful, but only a single hit is scored, keeping the veterans on the field and able to strike again next turn.  The velites shielding Silanus' zone are also hit.

The Carthaginian infantry advances in the centre and on the right to secure the key zone (which is important for morale reasons). 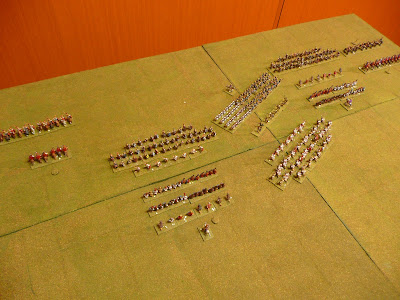 The allied cavalry on the right shatters the Numidians and claims the now vacant zone.  On the left the veteran cavalry score one hit, but cannot dispatch the tenacious Spanish.  They will be vulnerable to being shattered next turn.

In the central zones Scipio's men score four hits, which push the light infantry screen back behind the main line.  Importantly, Hasdrubal has been forced to give up the "Favour of the Gods" chit to prevent a double hit in the centre.  It is now Scipio's to use. 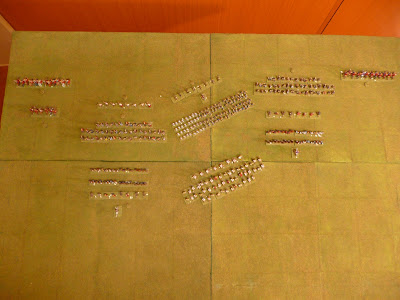 Hasdrubal's men score four hits of their own, but two of them are all-out-attacks (meaning that both attacker and defender take a hit and become spent).  The cavalry cannot take advantage of the equites' momentary weakness, which may become a factor in the outcome.

Rome pushes strongly this turn, scoring hits five hits and shattering the last unit of cavalry.  The Punic line is now outflanked on both ends, and it will not be long before this tells. 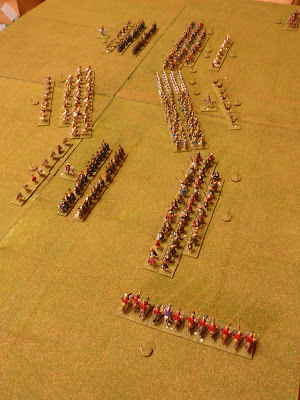 Hasdrubal's Africans in the centre score a number of hits, but momentum elsewhere has been halted. 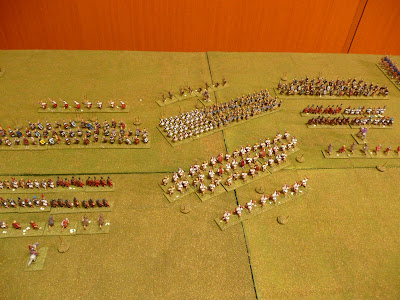 In an important turn for Rome the results are good.  Scipio's wing attacks... 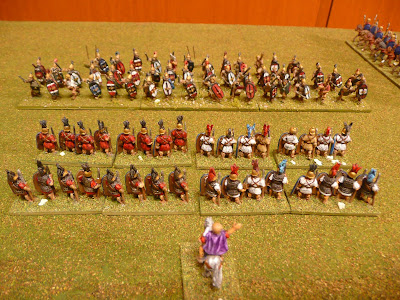 shattering an enemy unit and routing another.

Silanus' wing scores two shatters, and the cavalry advances into position behind Hasdrubal in the centre. 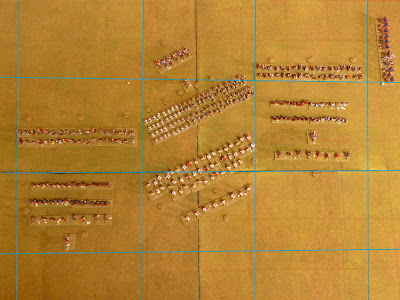 In turn 6 the killing blow is struck: the equites of the right score a shatter and the morale test sees the rest of the wing and Hasdrubal's centre rout (the centre has Romans to front and rear, giving it a negative morale modifier.  If not for this it would have stood longer), no doubt heading for the camp behind them. 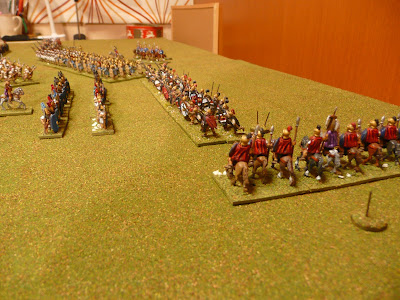 Scipio turns against the remaining Spanish.  They resist, but are too exhausted to do anything more than hold on.

The last attack is made, and the last remnant defeated. 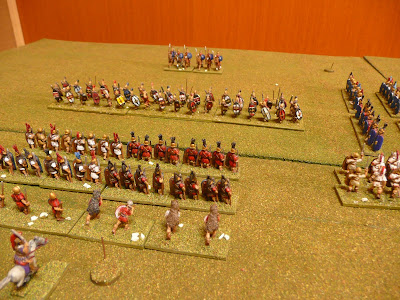 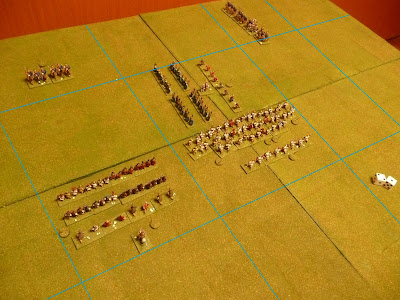 The Carthaginians started the battle with a handicap of 48 points in their favour for being fatigued (manifested in a minus to a unit's attacks once it is spent) and for having an inferior army fighting value.

The Romans scored 97 victory points in shattering eight enemy units and routing the rest, bar one withdrawn heavy infantry unit in the centre.

Carthage scored 31 points for spending the cavalry, the light infantry, the Spanish centre, and one allied legionary unit.  When this is added to the handicap, their total score becomes 79, giving Scipio a clear victory.

The outcome was not too dissimilar to the historical battle, but with the Roman centre a little closer to breaking than it perhaps was historically.

* The influence of the Roman commanders was very important.  The extra commands Rome could put towards combat bonuses influenced the outcome significantly.

* The "Favour of the Gods" chit probably  saved Rome from a game defeat in averting two sets of double hits.  Without these, two Roman units would have shattered and the game result (but probably not the battle) could well have gone the other way.  I think FotG is a great addition to the game.

* My oversight in omitting a third unit of Carthaginian light infantry would not have made any difference in the long run, but a different deployment might have.  There is some room for experimentation.