Battle of Tunis with Piero

Playing Tunis, we saw Carthage (Piero) pitted against the might of Syracuse (yours truly) .  Carthage has a combined-arms force employing heavy and light infantry, cavalry and chariots; the opposed Syracusans have Agathocles and his powerful but limited force of hoplites and heavy infantry.  While Agathocles is classed as an inspired general, Carthage has the mournfully unspectacular Hanno and Bomilcar sharing command duties.  Both armies are stiffened by two units of veterans, but Syracuse holds the edge in fighting values - 60 against 51 - thanks in large part to Carthage's reliance on levy troops.

We used the historical deployment, which looks like this: 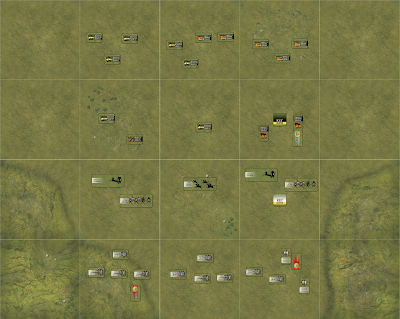 You will note that Carthage (the white troops) is not able to make good use of its chariotry and cavalry due to command limitations and the nature of the terrain.


The first few turns were notable for the number of all-out attacks employed - Carthage's by choice; Syracuse's by rule (hoplites must all-out attack if the chance arises) - and some low command rolls.

Taking the action up in the third turn, we see that Agathocles finds himself and his guard hoplites as the lead unit in their zone (this meaning that all enemy attacks will be directed against him this turn) and also spent (ie, his unit will be removed from the game if it takes another hit).  That this is not a good position to be in is something of an understatement! 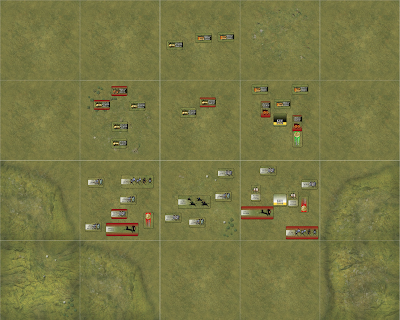 Despite some desperate rally attempts, Agathocles' chaps are shattered and he is forced to flee the table under, it must be said, somewhat ignominious circumstances!  Fortunately, the rest of the army is made of sterner stuff.

Over the next few turns Carthage keeps scoring hits (mostly by all-out attack), which cause the battle lines to quickly weary.  Hanno is killed in a rally attempt, but it is no great loss.  At last Syracuse finds enough command points to bring up some reinforcements in the centre, and things become very tense as both sides near breaking point.

The next screenshot shows the situation just before things start to swing to one side's advantage.  You will see that both of Carthage's wing zones are entirely spent (designated by reddened units) and that Syracuse is in a similar situation.  It is now Carthage's turn, and a strong showing will likely see them strike a decisive blow...

This is the situation: 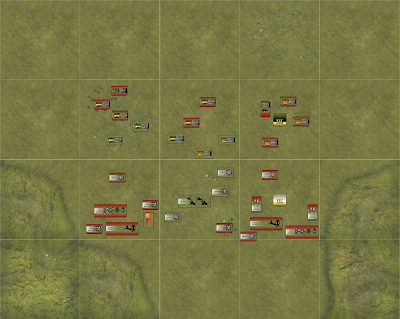 Leading with the centre, Carthage scores a hit on one infantry unit, but misses with the other three attacks.  On the left, two hits are scored, but at the moment of the second the gods are invoked on Syracuse's behalf, and the re-roll is a miss.  The other attacks also miss, leaving Syracuse with one unit of fresh hoplites to attack with next turn.

The greatest effort is now summoned for the assault on the right, but as determined as the attackers are, the defenders prove to be their equals.  No headway can be made, no hits are scored, and no morale test is required.

This is all the encouragement that the Syracusans need, and on their phase of the fifth turn the one remaining unit of fresh hoplites on the right launches a glorious attack which sees a unit shattered and Bomilcar fall in attempting to rally it.  With both generals now dead, the Carthaginian levies panic and run, leading to a general rout.  Despite the chaos around them, the two veteran units of the right and the unspent heavy infantry of the centre can hold their heads high after retiring from the fray in good order.

So, with the field won for Syracuse (but not without cost), it was time to tally the victory points.  In so doing we discovered that Carthage had scored 82 points to Syracuse's 75, which gave Piero a famous game victory.

It was a tense and exciting game, and considering that it was played live by two people on different sides of the globe connected by a computer program and a pair of headsets, it went pretty smoothly.  It is remarkable what a wonderful tool VASSAL is and how convenient is it to use.

We made a few in-game mistakes while getting used to the medium, the interface and, in my case, hoplites.  While all of the mistakes were minor (and my fault!) the biggest error was forgetting to rotate Agathocles' guard unit out of the lead position after it had been forced to make an all-out attack.  I won't forget again!

For those interested, Piero of Carthage has posted his own thoughts on the game here.  Many thanks to him and also to Joel for his fine work getting the new module ready.  I shall look forward to the next game!
Posted by Prufrock at 1:59 PM