As outlined in my last post, I played through a refight of Chaeronea (86BC) last night.  Here then is the promised report.

**  Unfortunately (and embarrassingly!), I misread the scenario details and had the battlefield reversed.  It was in fact the Pontics who had the river on their side of the table.  This is a result of my own wrongheadedness, and should not be blamed upon the author of the rules! **

Under Lost Battles Archelaus has twenty units of Pontics, made up of a vast quantity of cavalry, phalangites and light infantry.  Against this horde Sulla has sixteen units of Roman veterans and his lieutenant Murena.  With a fighting value of 50, for Archelaus' men to actually win the field would be a difficult task.  Given the disparity in quality, Archelaus' best chance is to try to win a game victory by scoring as many hits as possible on the Romans before his fragile levies flee the field.

Being a positive sort of fellow, Archelaus hatches a plan to refuse his left, hold the Romans with his centre and push the cavalry forward on the right to turn Sulla's left.  This done he will roll up the Roman flank, slaughter the legions and teach Sulla a lesson he will never forget.

Meanwhile, the genius of Lucius Cornelius has informed him that the aim must be to win the battle without suffering major casualties.  He has a fighting value of 77, giving the enemy a very useful victory point handicap of 39 points; his plan therefore is to refuse the left and rely on the river to his rear to help his own left-wing cavalry fend off any attempts at encirclement.  He will use his command and quality superiority to get his veteran legionaries into position quickly, break the enemy phalanx and then return at pace to reinforce the left before Archelaus gets into the baggage.

Such at least were the the pre-battle plans of the two commanders...

Archelaus has a hill in his rear centre and rear right zones upon which he deploys most of his phalanx and his scythed chariots.  The right (currently splashing through a stream) is made up of two average and four levy units of cavalry.  The far left, just to the left of the hill, is enjoying the shade of a few trees and a last drink of unbloodied water. 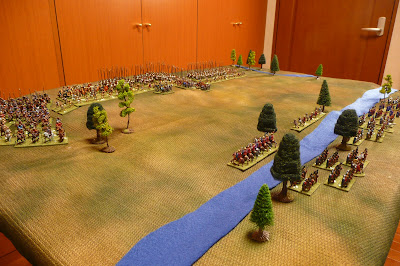 Sulla, who is somewhat taken aback by how large a host the enemy has gathered, deploys his infantry in the three central zones in a four, five, four distribution.  He has supporting cavalry units on both wings and a solitary unit of light infantry in the centre to deal with the scythed chariots.  Murena, he decides, will hold the left. 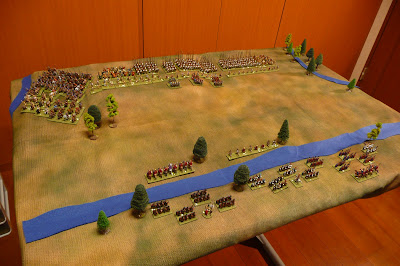 The phalanx on the hill, supported by light infantry and the scythed chariots. 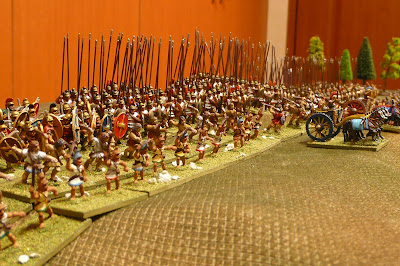 The mass of Pontic horse, which is already giving Sulla pause. 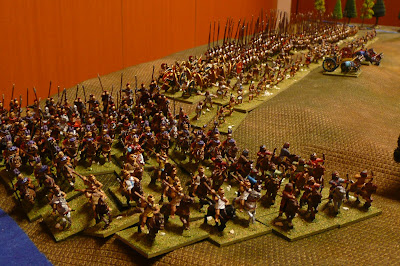 
Turn two (deployment is counted as turn one) sees a low command roll, but this does not put Archelaus off advancing his centre and right centre.  They will no longer get the dubious benefit of the high ground, but they will secure the key zone and give themselves first attack at the Romans (assuming these glorified Etruscans elect to advance).  Archelaus does not have enough commands to do anything fancy with his cavalry, so they just forge ahead and create a lot of dust. 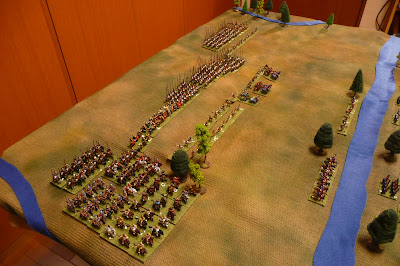 Murena advances to meet the Pontic right centre, with the rest of the line following. 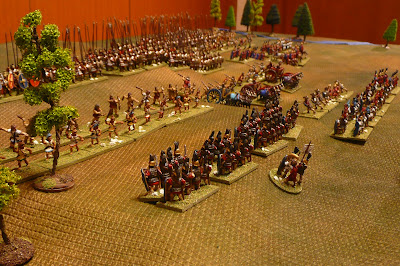 The Roman centre approaches the chariots and the light infantry readies for action.  On the right Sulla double (express) moves into contact with the enemy's refused left. 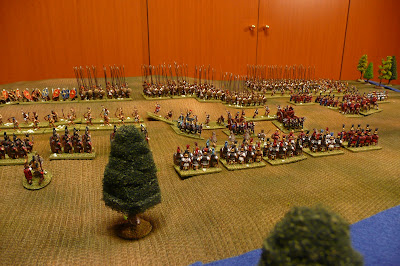 One unit of Roman cavalry is left behind to guard the rear; the other moves forward with Sulla. 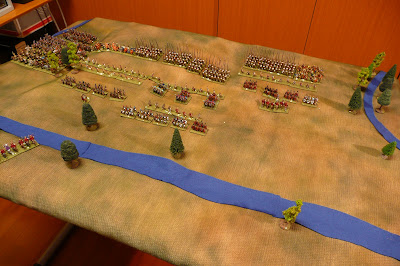 Turn three sees the scythed chariots charge.  The experienced legionaries deftly open gaps in the line through which the chariots are funnelled, but the light infantry prove to be a little less sanguine and are forced to retire shaken. 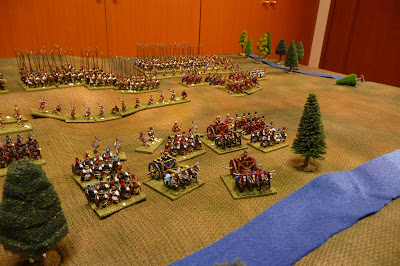 Archelaus' cavalry now bears down upon the Roman left.  Two units of light cavalry are sent to deal with the Roman rear-guard; the rest turn to threaten Murena's flank. 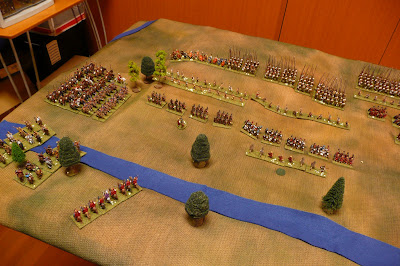 Sulla's advance is met with determined resistance.  The veteran legions - who appear to be a little disordered following their rapid advance - suddenly find themselves hit twice and under the cosh. 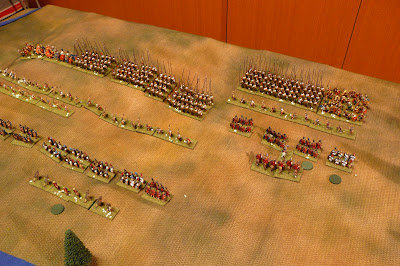 I thought you said these guys were levies?

On their own turn the Romans give better than they got, scoring seven hits along the line, shattering a levy heavy infantry unit on the left and forcing a supporting unit of light infantry to rout.  None of this can delay the inevitable charge of Archelaus and his left, however.

Turn four sees the Roman cavalry guard shattered immediately by the bows and javelins of the advancing light cavalry. 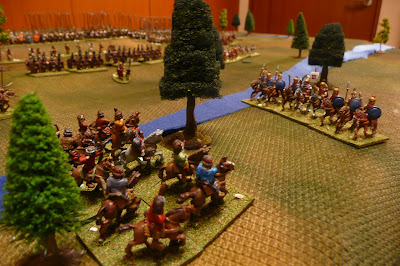 Who was the smarty pants that left us unsupported against those fellows?  Ah yes, Aaron Murena.  Thanks!
Archelaus' flank attack with the cavalry on Murena's zone is also successful as they bring their weight to bear.  The phalanx attacks see a flurry of all-out attacks being scored, which result in the Roman infantry line beginning to look a little fragile.  Now that they also have cavalry to their rear it might be an opportune moment for Sulla to think about hurrying up and finishing off the enemy left... 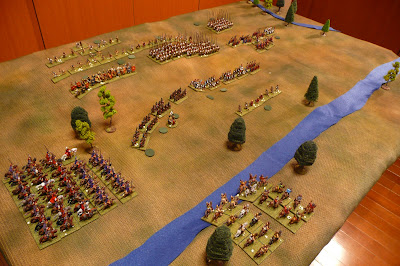 (A quick tour of the battlefield reveals that Archelaus' infantry are almost all spent.  Only one unit of phalangites remains on the left.  The centre has all its units on the field, but only two of them are fresh.) 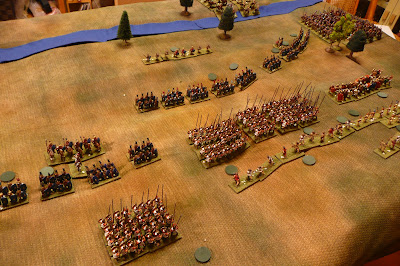 (The Pontic centre right has only a bunch of bullied light infantry and some shaky thureophoroi left.) 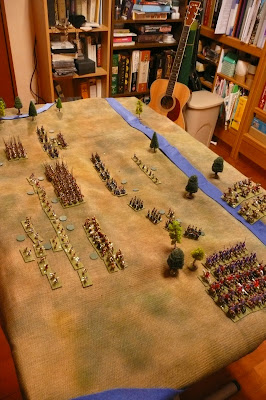 (But there's no denying that they have a lot of fresh cavalry [and some weird musical instrument by the looks of it]!) 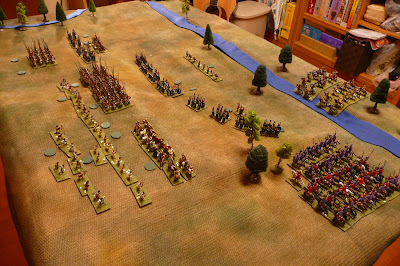 Returning now to the action, we pick things up during the Roman phase of turn four.  With the shouts and trumpetings from the discombobulated left reaching his ears, Sulla personally urges the men forward.  In the face of this assault the Pontic left finds it impossible to resist, and the levy heavy phalanx shatters  As this is the fourth unit to be sent from the field in this fashion the entire Pontic army is now at -1; on a morale roll of one the entire infantry line gives way.  Sulla has done it! 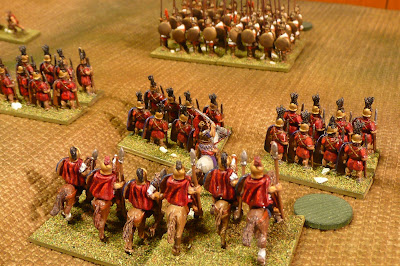 Think of the proscriptions, boys!
Archelaus, however, is supported by units that are fresh, so the cavalry does not run. 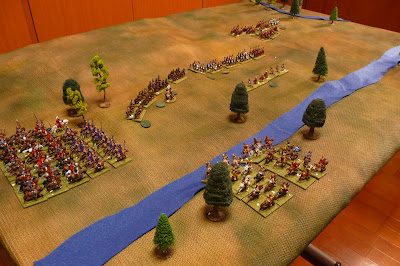 But wait - there are still more...

Archelaus also uses his personal influence, and the men respond.  Two hits are scored in the charge and a veteran legionary unit is shattered.  There is bite in the Pontic canine yet! 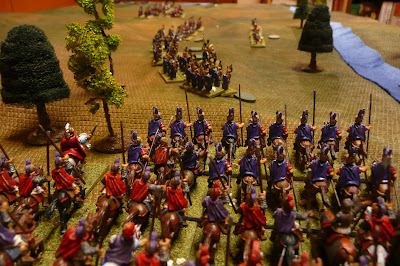 Sulla rushes his men over in support, but it takes a turn before they can attack.  In that fateful turn Archelaus strikes again, shattering another legionary unit. 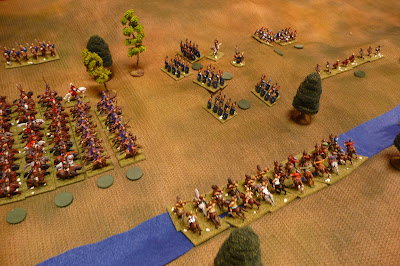 This cannot last forever though, and when on turn six the Romans shatter a fifth unit, the remaining Pontics are carried away in rout and the battle is over.
Sulla must now count the cost...
Conclusion.
Roman victory points:
Units shattered: 26
Units routed: 36
Units withdrawn: 13
Total: 75.
Pontic victory points:
Units shattered: 22
Units spent: 31
Handicap: 39
Total: 92.
Archelaus has pulled off a game victory.  Mithridates will no doubt take a little poison to celebrate.
Sulla meantime will let his troops loose on the baggage, give that fool Aaron Murena an earful and brood over his wine.
Final thoughts.
This was an excellent victory by the Pontics.  With the benefit of hindsight the Romans should probably have kept playing for time with the cavalry on their left wing, but to be fair that's what they thought they were doing - they did not expect to get shattered by light cavalry in just one turn!
Once the Pontic line had routed Murena could also have brought in fresh troops so that they would take the lead position.  Instead he risked attacking with a spent lead unit which resulted in another shatter next turn.  As it turns out this would not have been enough to win the game, but it would have given the Romans a better chance of winning.
The key to this battle is to be found in the third and fourth turns, on which the Pontic infantry managed to score a lot of hits (nine, I think).  That three of these were all-out attacks was not a disadvantage at all: a routed levy unit is worth 3 VPs and a spent veteran unit is worth 4.  When once side has a significant handicap advantage in its favour all-out attacks can be a real bonus.
Anyway, that's enough rambling - to finish, this was yet another very enjoyable game of Lost Battles.  As always, it's great fun solo and after a reasonably stressful few weeks it was good to kick back and relax with a battle.  It was quite nice to revisit this particular scenario as it was the first one I ever played with this system, when Luke first came down here way back in 2005 or 2006.
Posted by Prufrock at 1:07 AM