I fought a half-scale battle of Crimisus using Lost Battles last night.  I hadn't played a game for a while and was quite keen to do something hobby related after a recent period of too much work and too little play.

In the Lost Battles scenario Timoleon has his Syracusans deployed on the hill facing the Carthaginians who are attempting to cross the river onto the plain below the rise.  The Carthaginians count as surprised, so are only able to deploy four units a turn (subject to the availability of the commands needed to do so!), which gives Timoleon and his men quite an advantage tactically.  The Carthaginians have the stronger army, made up of 36,000 infantry in eighteen units, 1000 cavalry in one unit, 400 four-horse chariots in four units and two uninspired commanders (Hasdrubal and Hamilcar) for a total of 62 points of fighting value.  Thirteen of the Carthaginian units are levy quality however, which means they are quite ready to cut and run.

Here are a couple of shots of the deployment turn, showing the Syracusans on their hill and the Carthaginian chariots advanced across the river away from their support. 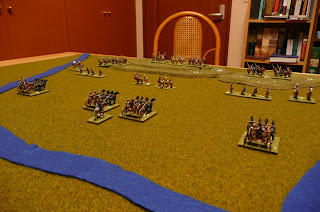 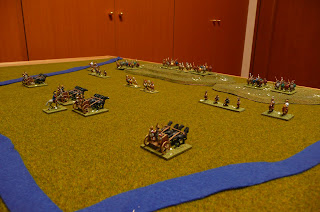 The battle went through three phases.  The first phase saw the Carthaginians trying desperately to hold off the Syracusans with their chariots while reinforcements were brought up.  This did not go very well... 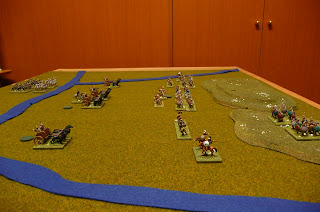 Some heavy infantry units arrived, included elements of the Sacred Band, but they did not have the commands to get across the river, nor to attack with all of their chariot units.  The Syracusans concentrated on attacking with their centre and their right, as they saw the heavy infantry beginning to form up behind the river and wanted to counter the threat before it materialised. 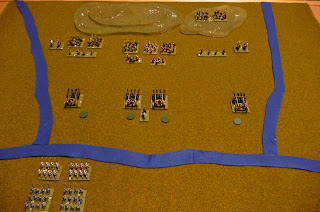 In the confusion (ie, a succession of very low command rolls) it proved impossible to get anyone at all across the river for the Carthaginians, and with the chariots about to break they fled back across the river to await the arrival of their infantry.

The second phase of the battle saw the Syracusans press forward towards the river and hem the Carthaginian forces in.  The Carthaginian difficulties were exacerbated by a sudden burst of rain which prevented orders getting through and made the task of the fighting units that much harder. 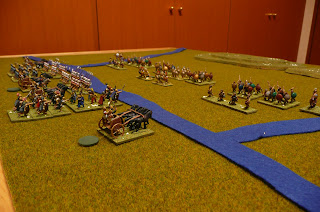 The third phase saw the Syracusan left force their way across the river, breaking the chariots opposing them and causing widespread panic amongst the levy infantry in the central zones.  A number of levy units routed from the field due to this.  Elsewhere, the paired Syracusan hoplites were beginning to inflict a lot of damage on the disorganised troops opposing them, and the Carthaginian reinforcements were becoming spent almost as soon as they arrived on the field.
The picture below shows the advance across the river: 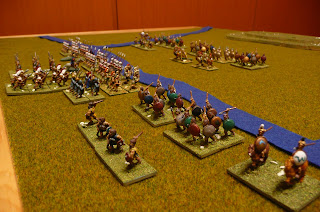 With the Carthaginian right gone, it was only a matter of time before the collapse became total.  Once the Syracusan left turned in upon the Carthaginian centre it took only two turns for the rout to become general. 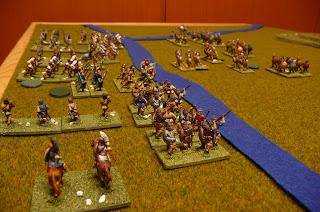 The battle finished as a resounding win to Timoleon: the Carthaginians were surprised, panicked, forced to withdraw out of their key zone, rained upon and then broken once the enemy got onto their side of the river.  It was a perfectly believable sequence of disastrous events that lead to an overwhelming victory for Timoleon and his small band of men.
The final victory points were as follows:
Carthage: 11
Syracuse: 94
It was my first time to refight Crimisus under Lost Battles, and while I had to use a few proxy troops it was a most enjoyable game and an interesting situation to play out.
Posted by Prufrock at 11:32 AM