This is the third post in a series on our multiplayer PBEM refight of Raphia.  The first post is here and the second is here.

By the end of the fourth turn the Seleucids had swept away the Ptolemaic left and turned in to attack the centre while Antiochus with his cavalry had galloped around to attack the reserve.  On their own left, the Seleucids were under considerably more pressure.  With their leftmost zone reduced to two units, one of which was spent, and their centre reduced to five units with only one fresh, they were beginning to look a little fragile in this quarter of the field.

With time running out, the Ptolemies needed a quick victory in the centre and on the right to allow them to turn to deal with Antipater's rampaging elephants and Antiochus' veteran heavy cavalry.  The question is, would it happen, and if so, would it happen in time?

Here is the board situation at the start of turn 5: 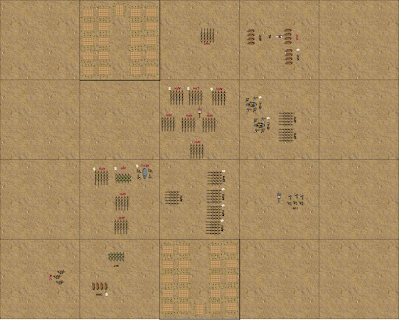 The Ptolemies rolled a one for command, giving them five command points to use.  Ephecretes began on the left, attacking Themison in his left rear zone.  Three hits were scored, shattering all the units there and clearing the zone.  With his last order Ephecretes sent his average light cavalry in to take the enemy camp and in so doing threaten the morale of the Seleucid centre.

Andromachus used his two commands to attack Nicarchus' phalangites, scoring two hits and causing a unit to shatter.  In the morale test that followed the entire Seleucid centre gave way and Andromachus advanced one spent levy unit into the now cleared zone.

Things had gone very well for the Ptolemies to this point.

After the Ptolemaic turn the board looked like this: 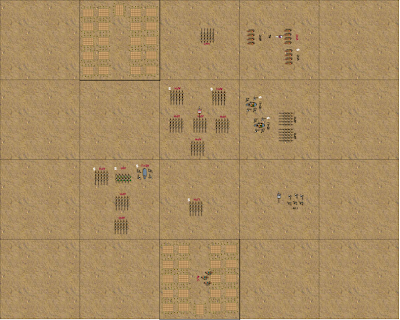 With the battle now at a crucial stage, all depended on whether the Ptolemaic morale could remain steady in the face of the Seleucid counter blow.

The Seleucids had 9 commands to play with and these were pumped into as many bonuses as possible. 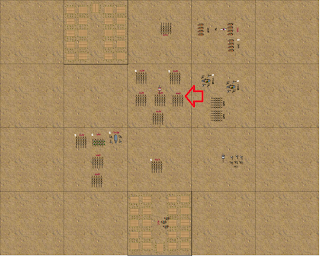 The lead elephant, needing a 6 to hit, rolled a 6.  As it was spent, it could not all-out attack and so no hit was made.

The paired phalangites, also needing a 6 to hit, rolled a 4.

The remaining elephant needed a 9 to hit but rolled a 7.

The second zone activated was the Seleucid key zone.  With 1 command the light infantry was ordered to turn and attacked the spent levy phalanx unit.  For 2 more commands it was given a combat bonus. 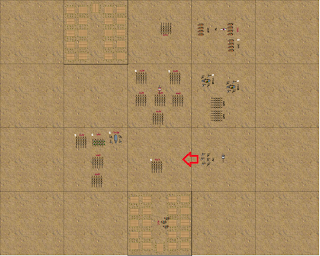 The light infantry needed 8 to hit and shatter the levy phalanx.  The roll? 2!
This left it all up to Antiochus, who put his own guard unit in the lead and attacked using his exemptions.
Antiochus' attack: 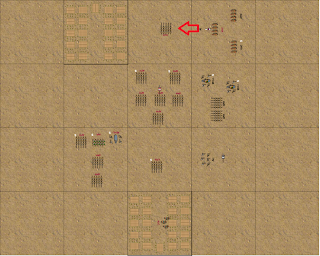 The lead veteran heavy cavalry with two combat bonuses going up against levy phalangites in an edge zone required a 4 to hit once or an 8 to hit twice.  The result was a 10, shattering the unit in one grand charge and causing a morale test!
With another high morale roll needed by the Ptolemies, the die finally failed to oblige.  On a score of 1 all but three units ran away, with those remaining three counted as withdrawn (as a mercy - technically we should have kept going).
So, a magnificent victory for the Seleucids!  The pressure they put on the Polycrates' left told, and despite the best efforts of Andromachus and Ephecretes, Nicarchus and Themison stuck it out for long enough for Antiochus and his men to carry the day.
The final points tallies were 116 to 65, giving Antiochus and friends a victory by 51 points, which equates to a major victory.  Antiochus will surely be feasting in Alexandria very soon!
Thanks to all of the fellows involved for making this such a great game to be a part of and hopefully there will be many more battles to follow.
(BTW, if anyone is curious about Lost Battles and might be interested in taking part in another such game, do join the Lost Battles yahoo group at this link and ask for more information there.)
Posted by Prufrock at 6:39 PM