The Battle of Raphia, fought in 217 BC between the ﻿Seleucid Empire and the Ptolemaic Kingdom, saw Ptolemy IV (Philopater) meet Antiochus III (the Great) to decide who would have control of the region of Coele-Syria.  The map below shows the geopolitical situation in the Mediterranean at 218 BC.  (except for VASSAL screenshots, all the following images are courtesy of wikimedia commons). 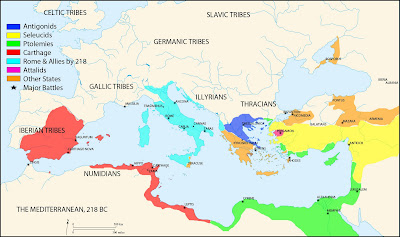 Our multiplayer email game of the battle sees the redoubtable Patrick W. acting as the commander-in-chief of the Seleucids, with Antipater's wing under his personal command.  He is supported by Nicarchus (Padraig L.) in the centre, Themison (John A.) on the left, and Theodotus (Iden H.) as a counsellor.

Antiochus was not a man to be trifled with.... 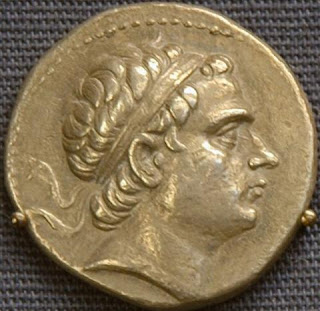 Under the Lost Battles rules, The Seleucid forces are represented thus:

The Right (commanded by Antipater):
2 units of Indian elephants equating to 80 beasts and 4000 men.
1 unit of veteran heavy cavalry with an average leader (Antiochus and his guard) for 1000 men.
A second veteran and an average unit of heavy cavalry representing 3000 men.
1 unit of average light infantry for 4000 men.
2 units of average phalangites equating to 8000 men.

The Centre (commanded by Nicarchus):
5 units of average phalangites and 1 unit of levy phalangites for 28,000 men.

In contrast to the steely Antiochus, Ptolemy looks as if he might prefer a good lunch to a battle... 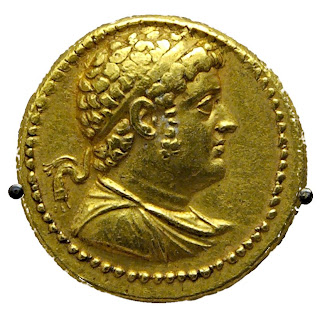 The Ptolemaic forces come out like this in Lost Battles:
The Left (commanded by Polycrates):
1 average commander (Ptolemy).
1 unit of veteran heavy cavalry and a unit of average heavy cavalry for 3000 men.
1 unit of African elephants representing 40 beasts and 2000 men.
1 veteran and 2 average phalanx units equating to 10,000 men.

The Centre (commanded by Andromachus):
6 units of average and 2 units of levy phalangites for a total of 40,000 men.

We used the historical set up, which is shown in the VASSAL screenshot below.  Red units are Ptolemaic, black units are Seleucid.  The Ptolemies move first in this scenario and the attack limit is 4. 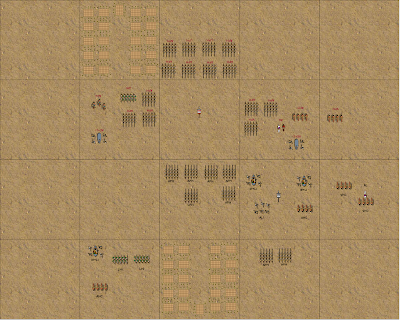 A quick note on rules...

We are using the normal Lost Battles rules ﻿with a few changes to cope with the PBEM and multiplayer nature of the battle.  Players have been allowed a strategy session in which the battle plans are discussed, but once the moves start players are not permitted to discuss strategy or to share information about intentions (though we have been a little more relaxed about this first time around).

Commanders-in-chief allocate commands to the subordinate commanders (and some to himself, in Patrick's case) and the on-table commanders use those commands as they see fit.  Orders are sent to the umpire who then resolves the turn, sending out a report and screenshot to all players.

This will continue until the battle is won or the ten turn limit is reached.

The first turn of battle (actually the second turn of the game as deployment counts as a turn) saw a 6 rolled for commands, giving the Ptolemies a total of 12. Polycrates activated first with 6 commands and Ptolemy's exemptions, attacking with his veteran cavalry and scoring a hit with an all out attack which also left the Ptolemaic cavalry spent.  This cost 2 commands.

Next he double-moved the average heavy cavalry into position behind the veteran cavalry, in the left wing zone.  This also cost 2 commands.

Finally, he attacked the Seleucid right centre, leading off with phalangites.  Two hits were scored, one on each elephant unit.  This cost 2 commands and all of Ptolemy's exemptions.

Next, Andromachus activated in the centre rear, moving all his troops forward one zone at a cost of 2 commands.

Finally, Ephecretes double-moved his light cavalry to outflank the enemy wing and advanced his main line one zone, putting the average heavy infantry in the lead unit position.  This cost 4 commands in total.  The screenshot below denotes moves with black arrows, attacks with red arrows and hits with blue diamonds: 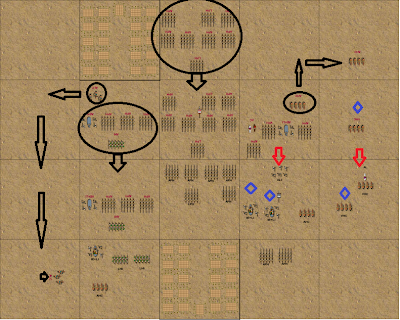 It was now the Seleucid turn.  They rolled a 5 for commands, giving them a total of 11.

Themison activated first on the left, attacking with his elephants and the infantry in support.  He scored one hit and used 3 commands.

Nicarchus in the centre used 1 command to wheel to the left to allow the Seleucids to concentrate their strength against Ephecretes' command in the following turn.

Antiochus attacked on the right, and although he fluffed his own attack the supporting cavalry didn't. The Ptolemaic veterans were shattered and Antiochus advanced into the now vacant zone, with only the AHC between him and the rear of the Ptolemaic army.

The average heavy cavalry now double-moved to join Antiochus for 2 commands, and the rest of the zone attacked Polycrates and friends.  In their attack the elephants inflicted some terrible wounds with both scoring double hits, which left all the units in the Ptolemaic left centre spent and the battle only just begun.  A glorious charge indeed!

To cement the advantage, the phalangites in reserve moved up to join Antipater in the centre right.  This is a screenshot showing the situation at the end of the Seleucid turn: 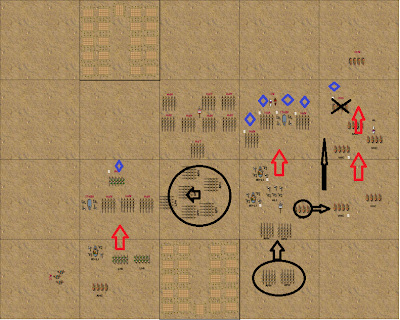 So, an eventful second turn of the battle!  Go here to read part two of the report.