Here are some pictures of some just completed Old Glory Successor heavy cavalry from their Seleucid range.  The first use these chaps will get is in a Magnesia refight with Lost Battles, but in future encounters they are as likely to be ranged against as ranked up with one another so I wanted to be able to group them into easily distinguishable sub-units of 2, 3, 4 or 6 bases.  This was done by painting the cloaks in two broad colours and distributing them amongst the bases to form a spectrum.  I also wanted one base to be able to do double duty as cataphracts, so one has two Essex cataphracts on it.  I'm not sure the cataphracts blend in quite as well as I'd have liked, but you can't have everything, I suppose!

Just to be completely accurate regarding the figures, the generals based individually are from Xyston and there is another Xyston commander in the mix as well.

Here's a view from the front: 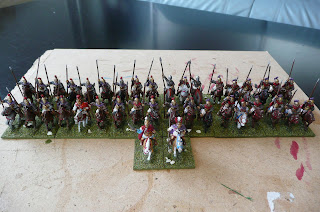 Another from an angle: 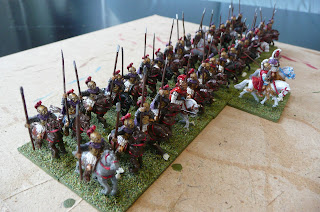 And one from the rear, showing the distribution of cloaks for unit recognition: 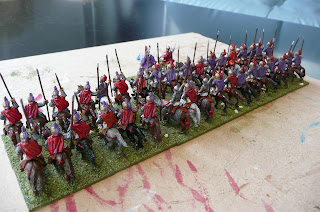 In seeing this last photo it has occurred to me that something is not quite right with the purple highlighting.  In fact, I wonder if I haven't used the colours the wrong way around?  I didn't notice looking at them normally, so perhaps its just a trick of the light, and the fact that they haven't yet had their coat of matt varnish applied...  At any rate, I'll have to do some further testing *sigh*!

Still, Magnesia draws closer...
Posted by Prufrock at 11:44 AM