Magnesia is one of those great battles of ancient times that like Cannae, Zama, Issus and Pharsalus (to name but a few) tends to fill the wargamer with both excitement and trepidation, for there is a certain epic quality about it to which one would like to do justice. Ideally, the battle must firstly be a spectacle which evokes something of the grandeur of the troops massed on the field for combat; secondly, the result and the steps that take us to that point must be believable and internally consistant; thirdly, it must be an intense and immersive gaming experience. If we are lucky, the pageantry, game events and emotional responses may occasionally combine to conjure a satisfying 'objective correlative' of the battle (to twist T.S. Eliot's famous term) which leaves participants with a heightened awareness of the historical events, how they meshed together, what some of the key moments might have been, and the thrill of having taken part in a suitably grand game on a grand subject.

Naturally, this is a tall order. Nonetheless, after having spent the last month painting up scythed chariots, horse archers and heavy cavalry to fill some rather gaping holes in my figure collection, I felt game to give the battle a try.  As is usual for me, I turned to Lost Battles for the rules as they frequently imbue proceedings with an air of the epic: processes and results both lend themselves well to imaginative embellishment as a narrative emerges from the actions being played out on the table top.
The real battle went something like this: the Romans had decided that they didn't want Antiochus III making trouble for them in Greece or anywhere else, so an army under the command of Lucius Scipio, younger brother of the famed Africanus, was sent to deal with him.  Antiochus gathered a huge host in anticipation of the decisive encounter and for its own part Rome welcomed the aid of Eumenes of Pergamum.
The armies were encamped not far apart, and after some days of aggressive Roman intent epitomised by the moving forward of their camp an increasingly nervy Antiochus signalled that he would give battle.  The Romans deployed with their left flank of just 120 horsemen resting on the river Phrygius, the two legions in the centre and the alae on either side of them.  Eumenes and his picked cavalry were on the right, supported by peltasts and the bulk of the Roman and Italian horse.
Opposite Eumenes were deployed scythed chariots and a mixture of foot and horse, some of which were cataphracts.  In the Seleucid centre was the phalanx, formed 32 men deep.  With elephants placed in the intervals between the pike blocks and the men formed up in such great depth, the centre must have been a forbidding sight. Antiochus himself commanded the right with his household cavalry, more cataphracts, and another mixture of horse and foot.  Light missile cavalry on the extreme right completed the Seleucid array.
Converted to Lost Battles terms, the orders of battle (at a troop multiple of 6) look like this:
Romans.
Foot:
Six units of veteran legionaries and two units of average legionaries for a total of  16,000 hastati, principes and triarii.
Two units of average light infantry for a total of 6000 velites.
Two units of average heavy infantry (Greeks, Macedonians, Thracians) for a total of 6,000 heavy foot.
One unit of veteran light infantry (Cretans, Trallians) for a total of 1500 light missile troops.
Mounted:
One unit of veteran Roman heavy cavalry and one unit of average Italian heavy cavalry for a total of 2,250 men.
One unit of Pergamene heavy cavalry commanded by Eumenes himself, for a total of 750 men.
Generals:
Lucius Scipio is rated as an average commander and Eumenes is rated as an average leader.
Seleucids.
Foot:
Six units of average and one unit of levy phalangites for a phalanx numbering 24,000 men.
Two units of levy heavy infantry for a total of 12,000 assorted heavy foot.
Three units of levy light infantry for a total of 18,000 light foot of dubious quality.
Mounted:
Two units of average and one unit of levy cataphracts for a total of 6,000 men.
One unit if veteran household cavalry commanded in person by Antiochus, one unit of average guard cavalry, and one unit of levy cavalry for a total of 5,250 men.
One unit of average light cavalry for a total of 1500 Dahae and Tarentine missile cavalrymen.
One unit of scythed chariots representing 150 machines.
One unit of Indian elephants and escorts, representing 30 beasts and 1500 accompanying skirmishers.
General:
Antiochus is rated as an average leader.
The battlefield is made up of 20 zones arranged 5 across and 4 deep, each zone being 1000 yards across and 1000 yards deep.  Both camps are present on the battlefield, with the Roman camp in their rear centre zone and the Seleucid camp in their left rear centre zone.  The Phrygius river cuts through two zones, the Roman left wing and left flank, and the rest of the battlefied is considered flat terrain.
Below are some pictures of the armies at deployment.  The first shot shows the battlefield from behind the Seleucid right wing zone. 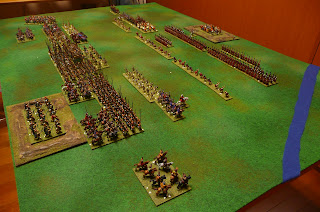 The second shot shows the Seleucid rear right centre, with the phalanx and two units of cataphracts in front of the camp.  Antiochus leads his household cavalry in the next zone foward, supported by a detachment of light infantry. 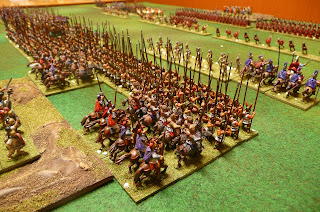 The Roman infantry is deployed across two zones, with the velites forward of the main line.  The allied Greeks and Eumenes with the cavalry extend the line two zones further. 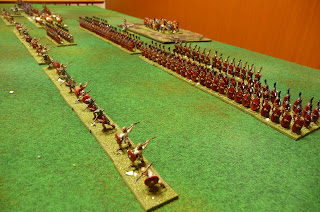 This shot here shows the Seleucid left, with levy troops and a unit of the guard cavalry supporting the potentially fearsome scythed chariots.  A unit of Galatian heavy cavalry is in the foreground, angled away from the main line.  Across the battlefield can be seen elements of Eumenes' command, though he himself is not visible in shot. 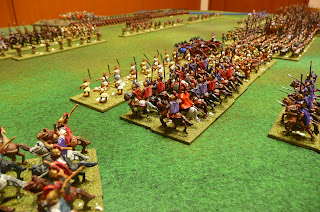 When the battle commenced Eumenes ordered his men to kill, maim and panic the horses of the chariots with missiles and noise, whereupon he took advantage of the disruption they had caused in their own ranks, charged home and put the Seleucid left to flight. With one flank now exposed the centre lacked essential support.  As the legions closed  it began giving ground and in the confusion the elephants with their support troops were driven into the men of the phalanx, exacerbating the disorder and preventing either troop type from fighting effectively, much less co-ordinating their strength.
Meantime - and in stark contrast to the problems besetting the left and the centre - the right under Antiochus advanced strongly, drove off the small cavalry flank guard and put some of the allies to flight. Elements of Antiochus' force briefly threatened the Roman camp, but resistance there stiffened in timely fashion and with his centre now collapsing Antiochus fled the field.
This (very) brief overview of the course of the historical battle tells us that the key elements of the battle from the wargamer's perspective could be thought to be as follows:
1) Eumenes' panicking of the scythed chariots.
2) The defeat of the scythed chariots causing a wider morale crisis on the Seleucid left.
3) The battle between the phalanx and the legion in the centre.
4) Antiochus' success on the right, and the timing of the advance on the Roman camp.
5) The collapse of the Seleucid centre leading to Antiochus' decision to flee.
Well, I've said about all I can say on the subject of preparations.  So, stay tuned, and the next post will look at the battle on the table top itself.
Posted by Prufrock at 12:57 AM