After reading Patrick Waterson's article on Dertosa in the latest Slingshot (issue 271) I decided to come up with a Lost Battles scenario based upon Patrick's reconstruction of the battle.

The gist of Patrick's interpretation is that Hasdrubal was attempting to pull off a Spanish version of Cannae. That is, he was hoping to annihilate the army of Publius and Gnaeus Scipio by fixing it in place in the centre, encircling it with the cavalry of the left wing, and finally crushing it with wrap-around attacks to be carried out by the Carthaginian veteran infantry on each flank.  Unfortunately for Hasdrubal, all did not go to plan.  The Spanish allies to whom he had entrusted care of the centre ran off at the earliest opportunity, which encouraged the Numidian cavalry of the right wing to do the same.  Despite a brave performance by the rest of the infantry the Carthaginians were soundly beaten.

The situation is unusual, for not only did Hasdrubal seem to have little idea his Spanish allies were lacking motivation, but they also turned out to be very unmotivated indeed, and ran at the first onset.  One of the big questions of the scenario becomes how best to model this in Lost Battles.  What follows are details of an initial basic scenario for Dertosa that uses no special rules or add-ons.  Depending on results, the scenario may require finer tuning.

Ground scale: 500 metres per zone
Manpower Multiple: x3
Attack Limit: 3
Terrain: The battlefield is a flat plain, and while a case could perhaps be made for including a Carthaginian camp on table to aid deployment, I elected not to do so.

Below is a possible deployment based upon Patrick's reconstruction, but limited by command points.  These graphics are from John Acar's excellent VASSAL module for Lost Battles (click on the picture for a larger view): 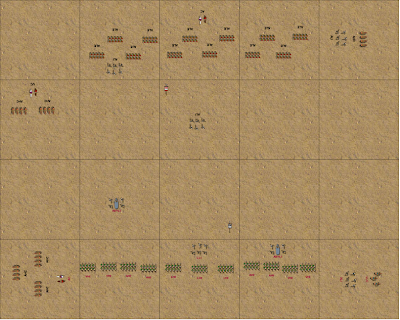