Turn two saw a determined German response to the Timoshenko attack in the south, with elements of 9th Army and 2nd Panzer Groups cutting into the Soviet troops. An aggressive attack by four divisions of the 3rd Panzer Group west of Krichev has led to a confused situation as the Soviet front line folded back upon itself. The advanced panzer divisions then found themselves in a pocket of sorts, though the forces to their east, in Krichev itself, are not strong.

Here is the board situation at the end of turn 2: 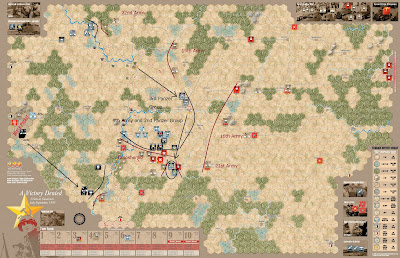 Email ThisBlogThis!Share to TwitterShare to FacebookShare to Pinterest
Labels: A Victory Denied, after action reports, boardgames