Pat and I have now played a couple of turns of A Victory Denied. This clickable screenshot shows the situation at the end of turn one. Smolensk has fallen already as the panzers begin to make headway in their drive on Moscow. On a positive note, Timoshenko's counter-attack in the south from Rogachev successfully linked up with elements of 13th Army to retake Mogilev and destroy two Panzer divisions in the process. 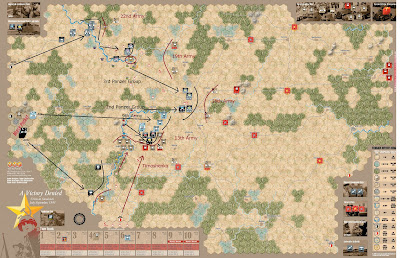 The Germans are now firmly in control in the centre, but are being forced to send resources south to prevent a Timoshenko-inspired breakthrough.

A note on map symbols: arrows represent advances made this turn, curved lines show the current position of the fronts, and circles indicate pockets which have been surrounded or bypassed. Black is used for the German forces; rust is used for the Soviets.
Posted by Prufrock at 2:34 PM

Email ThisBlogThis!Share to TwitterShare to FacebookShare to Pinterest
Labels: A Victory Denied, after action reports, VASSAL