It's been a quiet couple of weeks on the blogging front. A computer meltdown is partly to blame, but with that sorted out I've also been busy playing over VASSAL. Two excellent games of Lost Battles were had with John, a couple of live games of Commands & Colors enjoyed with my brother, and now my boardgaming buddy Pat is back in the saddle as well.

Pat suggested we play A Victory Denied, which is the 2009 follow up to my favourite WWII boardgame, A Victory Lost. Neither of us has played it before, and while we are very likely making all sorts of blunders, it is turning out to be an engaging affair.

The game takes as its subject the abortive drive on Moscow from July-September 1941, and it already seems to be less static than its predecessor. That's not to say that AVL is static, but there are certain defensive positions that get used time after time. I imagine that the lines we use will firm up as the game progresses and as we get more experienced.

Here then is the game map and positions at start. The German units are gray and light blue while the Soviets are tan and red. It is a nice map, but I do find the glossiness of the paper can make it a little difficult to see what's what on the table under my lighting. Yet another reason to use VASSAL, from which this screenshot is taken: 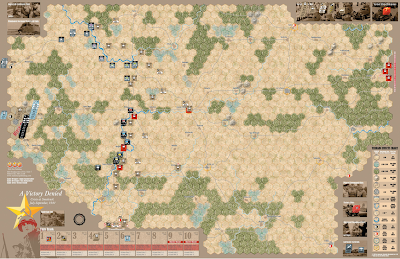 It's been a while since I've learnt a game from scratch, and I'm enjoying it. It shows again the value of having gaming buddies to give a wee push when one is needed!