This picks up (finally!) from where an earlier post left off. Follow this link to see part one: http://prufrockian-gleanings.blogspot.com/2010/03/2nd-pharsalus-part-1.html

We rejoin the action in turn 5, with Caesar attacking all along the line and trying to break through with his cavalry on the right. It takes another turn to overwhelm Pompey's levy heavy cavalry, and in that time it manages to shatter another Caesarian unit and forces Caesar to rally a third. Pompey is killed attempting a rally of his own in the centre left zone, and from there Caesar's men press on remorselessly.

Here is the scene following Pompey's death and just prior to the destruction of the last Pompeian cavalry unit: 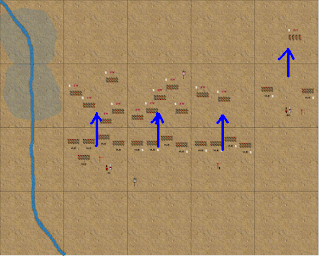 The Pompeians fight on for another two turns, but fail to do much damage to Caesar's veterans. Caesar sees his cavalry advance victorious on the right, his infantry roll up Pompeian centre from its left, the line disintegrate, and the Pompeians turn to flight. 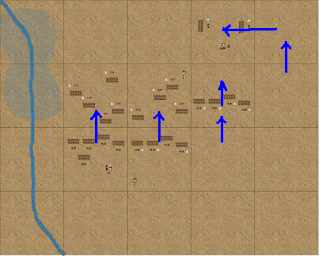 It was a great game played by John, who handled the Caesarians very well. His decision to press the attack on the right turned out to be the correct one (again Antony failed to do much damage on the left) and while it was tight for a turn or two, the pressure told and Pompey died while trying to hold things together long enough to score some more hits.

Final scores: Caesar 108 points to Pompey 94. A narrow victory, but one that felt rather more decisive than the final tally had it.
Posted by Prufrock at 12:16 PM