This was a solo test game using the scenario generation system I've been fiddling around with for Lost Battles. A Carthaginian army of inferior quality is attacking Roman-occupied Gaul. The Roman defenders are of average quality.

Rome won the initiative and elected to choose board edge rather than turn order. Rome took the side with the hill and Carthage decided to move first. The attack limit is 5.

Here is a view after deployment. Both sides have weighted the right wing, refused the left and hope that their infantry will hold out long enough for their cavalry to envelop the enemy centre. 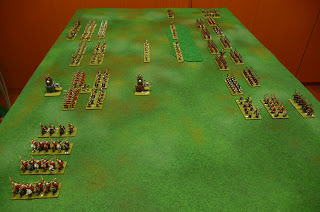 Here the wings have closed. Fighting has already commenced in the centre, over the hill zones. The view below shows the Carthaginian cavalry attacking the Roman left, which is also engaged to its front. There is a similar situation on the Carthaginian left, but the infantry have already advanced forward, leaving the outnumbered cavalry to face their Roman counterparts. 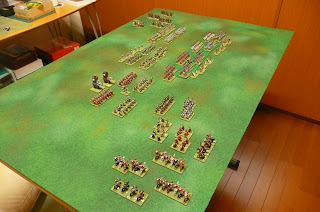 The action on the wings is quick and bloody with both sides shattering or routing the enemy's weakened left. Rome manages it more quickly however, and the Carthaginian centre is now enveloped and their morale is shakier as a consequence. To balance this, the Roman centre is entirely spent due to determined attacks by the Libyans. The situation can be seen below: 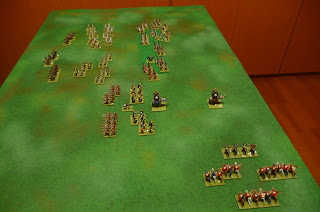 The Roman cavalry hit the Carthaginian infantry from the rear to support the flagging legions on the hill. The shot below shows the scene just prior to the Carthaginian centre and centre left folding, mirroring the events that have taken place on the Roman left. 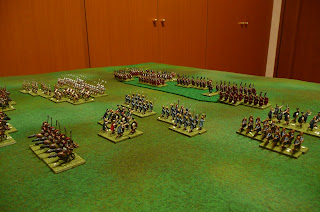 The remaining forces of both victorious flanks now swing around in an attempt to make contact. After the advances it is the Carthaginians who hold the hill. The Romans are at breaking point, but the exhausted foot cannot land a hit on them. The Spanish cavalry is too far from the action, and there are not enough commands to get them into place. In the Roman turn the infantry can make no headway in assaulting the hill; it is left to the battered Roman cavalry who, having galloped around the rear of the Carthaginian army, now charge home against the spent Celtiberians on the Carthaginian left. The Celtiberians perhaps wish they had held their attack for a turn and let the reinforcing elephant take the lead... 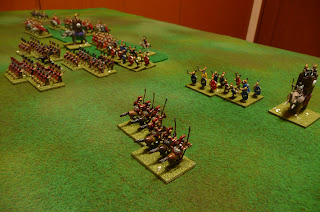 A hit is scored and the remaining Carthaginians flee. It is a Roman victory, but a very tight one indeed. One more hit on the Romans and it would almost certainly have been the legionaries who failed the morale test and fled the field.

It was a good, exciting game that went well and served its purpose!
Posted by Prufrock at 11:46 AM