Inspired by my Civil War readings, I've been playing through the morning turns of the Cedar Creek scenario from Richard Berg's Glory III over the last couple of weeks. This is a picture of the battle at around 10am. 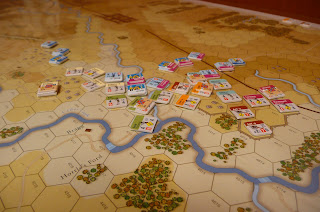 Early's Confederates had previously fallen upon the VIII and XIX Corps and routed them utterly, but VI Corps is now up and has formed a defensive line with the remaining elements of XIX Corps. A close look will show you that the Union right has been busted open, and the cavalry are going to have to do a bit of work to restore the situation. I called time on the game not long after this as it had had a good run and the table was needed for other things.

The Glory system is well-suited to solo play. It uses a chit-draw system to activate formations so it is easy enough to play each drawn chit on its merits. I probably should have had the federals conduct a fighting withdrawal rather than have them hold a forward line, so in future plays I should probably introduce a die-roll to determine tactics at a higher level. The system can bog down a bit when there are a lot of units in play (the Antietam scenario was heavy going), but the Cedar Creek scenario is just about perfect.

There are three types of combat: artillery fire, defensive fire and the charge. All are resolved on the throw of a d10 and the addition or subtraction of modifiers - mostly easy to remember ones - but in practice things become a litle more complicated because of the command and control restrictions.

I also have Glory II (Fredericksburg and Chancellorsville) so when time permits I must try another run-through with one of those scenarios, too. They are quite big games though, so I may struggle with motivation if they are only played solitaire!
Posted by Prufrock at 12:14 AM