What follows is a photo replay of a battle between Republican Romans and later Macedonians set sometime after the end of the Hannibalic War. Some of these pictures were originally posted on boardgamegeek.com, but this report on the battle is new. The fight used my hexless variant for Commands & Colors: Ancients. The Romans have been caught crossing a minor river. It is fordable all along its length, but is something of a nuisance nonetheless. There is a rise on the Macedonian right defended by Thracian thureophoroi and a screen of slingers; there are also some fields in the centre, but these do not hamper movement at all. 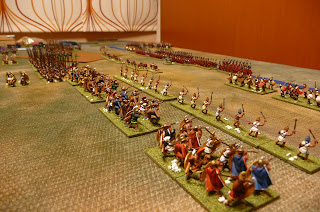 The Macedonians advance swiftly on the left as the Romans get their forces organised. 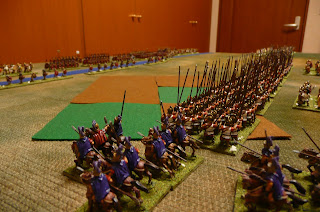 The Romans send their Aetolian allies to take the hill and threaten the rightmost flank of the phalanx. 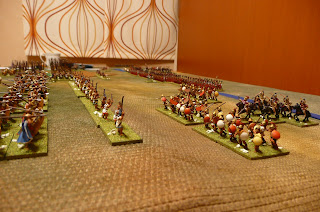 Perseus with the guard cavalry sweeps forward on the extreme left to push back the velites, who are attempting to disrupt the phalanx with missile fire. Perseus is forced to retreat after a counter-attack by the Roman horse. 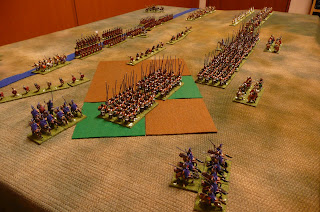 The action is hotting up on the hill as the Aetolians make a determined assault. They drive off the slingers and severely disrupt the defending thureophoroi as their leader, Timoleon, urges them on. 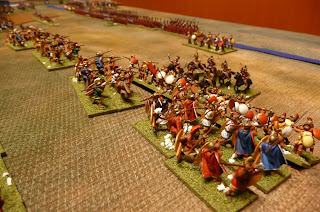 Meantime, the phalangites in the centre left are starting to take some casualties from the missile fire of the velites. It is time to close for battle. 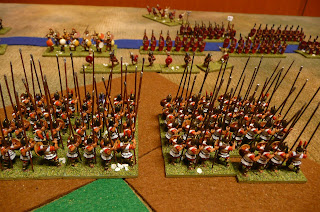 On the hill the thureophoroi have rallied, and one of the Aetolian units has broken, thwarting the attack. It will be up to brave Timoleon to commit his light cavalry and attempt to turn the tide. 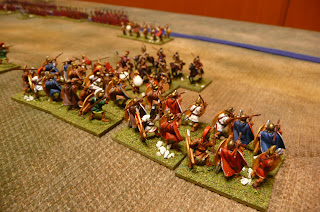 The phalanx closes in from the left along the line. You can see in the centre that the velites are struggling manfully to hold Philip and his guard phalangites off long enough for the hastati and principes to do their work. 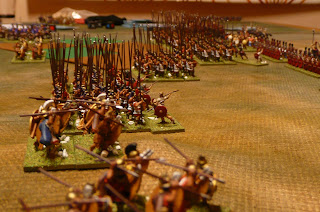 Timoleon makes his charge, falling upon the right flank of the thureophoroi. One unit breaks and the other is under pressure to its front and to its rear. 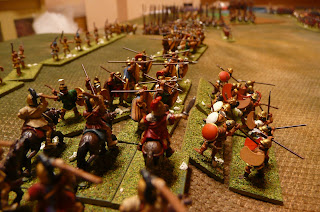 In the centre the velites are crushed between the lines. 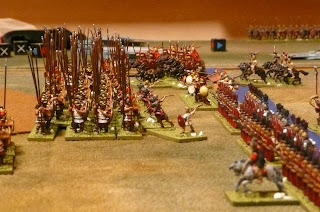 Alas for the Romans, Timoleon falls! The thureophoroi drive off the light cavalry and rout the Aetolian auxiliaries. They have survived the attack but both sides are too exhausted to renew the fight. Stalemate ensues, but it is a stalemate that favours Philip. 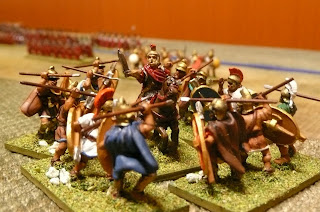 The heavy infantry now makes contact. The hastati, unprepared for the weight of the phalangites' attack, are quickly in trouble and the principes are ordered to lend their support. 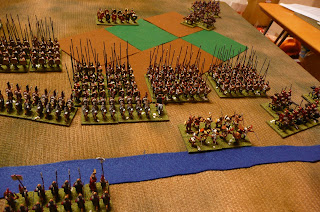 The principes too find themselves in difficulty as the phalanx advances. There is not much between them and the river now. 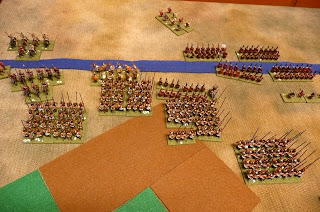 The consul Dolabella throws his centre in at an oblique angle to hit the weakest link in the phalanx hard. He is successful! 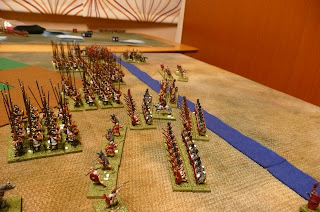 An overview shot shows the relative positions of the main infantry lines at this stage. The Romans have lost the hastati and the triarii are about to be committed. But the phalanx is wavering... 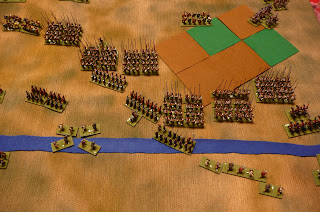 The Romans break a unit of the phalanx in the centre and force another to flee, but Perseus finally attacks again on the left, driving the Roman cavalry from the field. 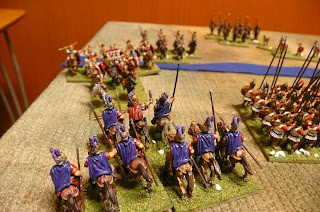 The Romans have taken heavy losses. The hastati and principes have been mauled, the Aetolians were unable to take the hill, the cavalry has been defeated and with the right flank now exposed Dolabella sounds the retreat. The troops fall back to the camp.
Posted by Prufrock at 10:07 PM