Hollandspiele has gained a reputation for innovative, fast-playing board wargames with more to them than meets the eye, and Table Battles is so far proving to be the epitome of that approach.

Using just a dozen or so cards per army, coloured sticks, and six dice per side, the game allows you to recreate dozens of historical battles on your table, each playing out in somewhere between ten and thirty minutes of real time.

The rules are very succinct - just four pages - but they are flexible enough for all kinds of situations and eras to be gamed.

Take Pharsalus, for instance. Pompey begins the battle with four cards on the table representing the commands in his army, being, from left to right, Labienus, Pompey, Sulla and the Cilicians. He rolls his six dice, and can allocate these dice to his commands according to the rolls, the card limitations, and his design. Allocated dice allow him to activate his commands to attack or react to enemy attacks.

His command has two wings - Labienus and everyone else - and he can give dice to one card per wing per turn. 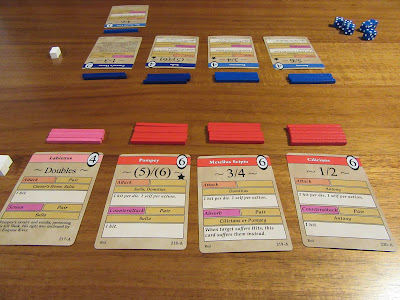 The oval number tell us how many blocks (hits) a division has. Labienus can be activated by doubles, Pompey by fives or sixes - but only one or the other, and only one die per turn (brackets limit number of dice placed per turn to one), Metellus Scipio by threes or fours, and the Cilicians by ones or twos. The orange headed boxes indicate which enemy the division can attack, and the damage it does. The pink headed boxes indicate reactions, which are performed when the enemy attacks. 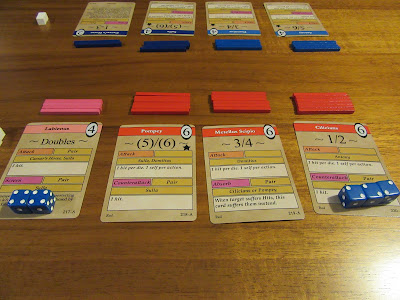 After the dice are rolled the best choices are to load Labienus and the Cilicians so that Pompey has two good options to activate next turn. 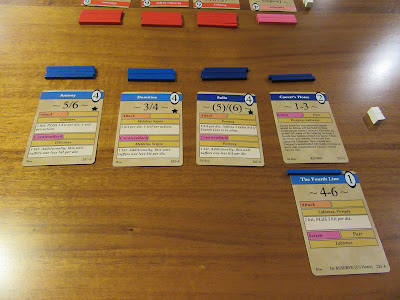 An an additional subtlety, Caesar has his Fourth Line in reserve, meaning they can only be activated once Caesar's horse have retired. A close look at the cards shows that the horse cannot attack, with the best they can do being to react to an attack on themselves by forming a screen (screens have the effect of negating an attack and preventing hits on either side). 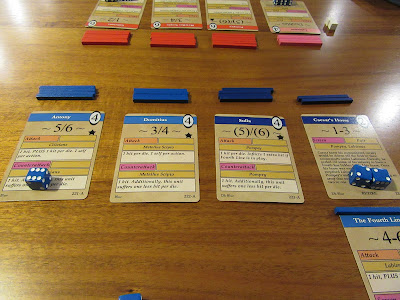 In this case, Caesar elects to use the horse to screen any potential attack by Labienus and to add one die to Anthony so that he can hopefully deter an attack by the Cilicians.

The game now begins properly, with Pompey activating the Cilicians to attack, doing three hits, taking one themselves, and then another when Antony reacts with his command. Dice are rolled again and allocated, and because Caesar had to respond to Pompey's attack, Pompey is able to retain the initiative and choose where he will activate next.

And that is pretty much way things run.

The game is won when a) one side has no morale cubes left,* or b) the active side has no target remaining that they could, given the right dice, legitimately attack.

* when a division loses its last block that side must surrender a morale cube - or two if it is a 'star' division - but if both divisions - attacking and defending - lose their last block at the same time, no cube is surrendered

When a side reacts, this counts as its own action, and play returns to the other side. Initiative therefore is very important. If you make a play which does not require a reaction, then the other side now takes the initiative and can choose where to attack, including planning where or how to force reactions themselves. This creates intense dynamic interplay over a number of turns as players try to set the conditions for a devastating attack or else attempt to wrest the initiative from the enemy so that they can dictate play for a period.

In our test game, Pompey's Cilicians and Antony's division cancelled each other out, losing their final blocks at the same time...

But Pompey was able to largely keep the initiative and defeat Domitius' division which, having a star on it, was worth two morale cubes, thereby giving Pompey the victory. 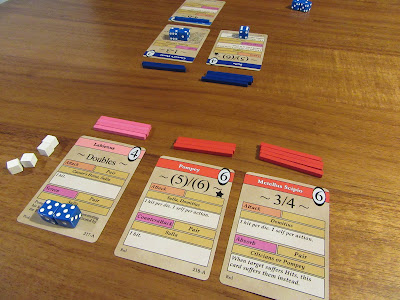 The game is short, but the interplay is dynamic and there is a nice range of options in how to approach each battle. The games I've been playing are all solo, but I can see how much fun it would be to settle down with a friend and play out a series of battles over an afternoon or evening.

Verdict: a really fun game. It all fits together so nicely you sort of feel like you could have come up with it yourself. But of course, you didn't - Tom Russell did, and he deserves a bit pat on the back for having done so. As an added bonus, it is available cheaply in a print-and-play version on Wargame Vault if things are a bit too tight to be paying for shipping, and with (at current count) four expansions available, there is a lot of play to be had.