The urge struck last night for a wargame. A little fossicking brought out recent favourite W1815, and the board was set up. 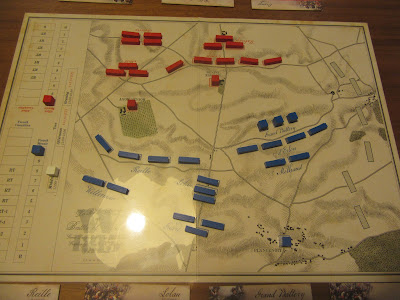 Napoleon begins with a boom! - the Grand Battery roars its delight at battle commencing. Anti-climactically, the mud interferes, Orange is unaffected, and a relieved Wellington passes the baton to Blucher, who gets lost.

Once more the Grand Battery barks; again the mud interferes. 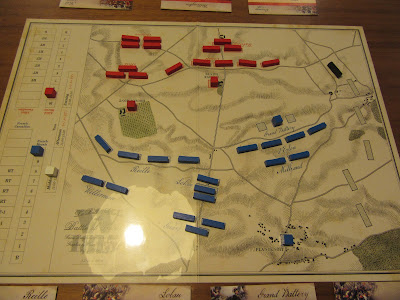 Blucher brings on another.

Reille attacks again with casualties on both sides. Blucher brings on a third division. 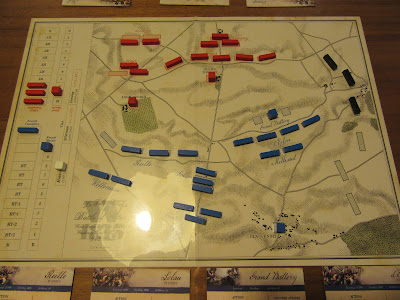 Kellerman is activated to strike at Hill. Allied morale is affected, but at a cost. Hill, having formed square, orders his troops back into line.

Wellington turns to Blucher, who brings on another division and is now present in considerable force. 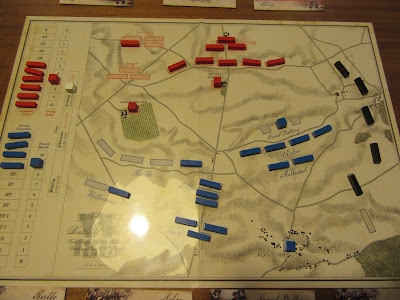 Reille threatens Hougoumont again, and for the last time the Reserve is used to preserve the position. Milhaud attacks, but Orange goes into square and staves off damage. Blucher launches, and the Guard must activate to prevent Plancenoit falling.

Blucher moves to bring on another division. The Guard attacks Orange with Napoleon's blessing, and does good work.

Blucher launches at Plancenoit again, and this time it succumbs.

The Guard attacks once more, and the Allied army, morale test failed, routs. Victory to the French! 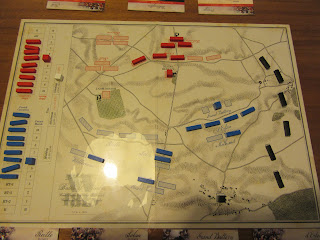 The Grand Battery fires off again, and Blucher navigates his way to the battlefield. This interplay continues for some time. Eventually Kellerman moves against Hill, who goes into and comes out of square. Reille hits Hougoumont but is repulsed. Casualties mount. 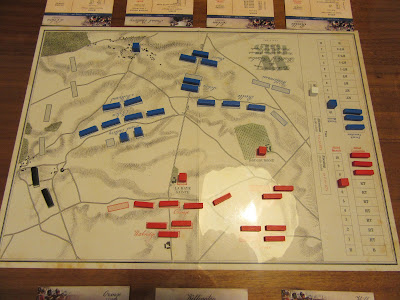 Reille throws his all into the attack on Hougoumont. The Reserve activates to hold the French off. Blucher comes as quickly as he can; so quickly that Lobau counter-attacks him. 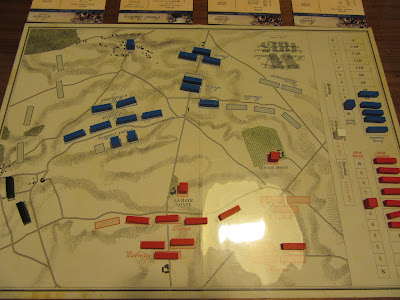 The Guard moves and Blucher comes on in force. Casualties mount; the French push, but, just as they are about to drive Wellington off his hill, their morale breaks. An unlikely victory for the Allies! 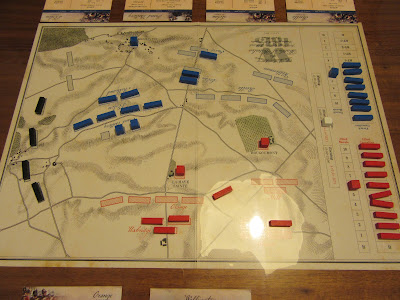 And so W1815 provided an entertaining couple of hours play. The French were very unlucky in the second game to fail a morale test just as they were about to break Wellington on casualties alone. They rolled a six for morale, and with two plus-ones in play, just tipped over their breakpoint. It must've been the spectre of the Prussians that did it!

Overall, the game is nicely balanced, and there are different strategies to explore. It is mostly the French who drive the action, but there are moments when the Allies can apply pressure and force Napoleon into desperate choices. Well suited to solitaire play, I think.

Don't tell the missus, but I enjoy this game so much I've ordered its scion - Hollandspiele's Table Battles and all its expansions - from the US. I wonder if I can smuggle it into the house unnoticed? The chances are not good!