One of the most interesting small-footprint games in my collection is the innovative Waterloo simulation W1815 by Hannu Uusitalo. It was brought out by U and P Games in time for the hundredth anniversary of the battle, and while it's out of print, it's always worth a revisit. 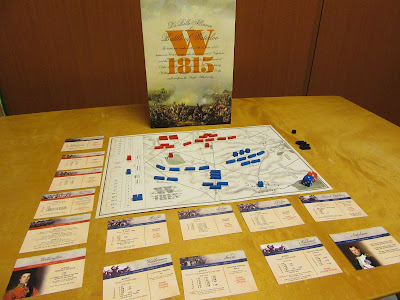 Unlike most board wargames, the pieces in W1815 do not move. They can be removed as casualties - and there are a few of markers which indicate the arrival of Blucher's force and possession of Hougoumont, La Haye Sainte and Plancenoit - but other than that the board is static. In effect you are playing an interactive map game, not a usual hex and counter or area control style board wargame.

If you were ever the type of kid who would get books out of the library and pore over maps illustrating the different stages of Waterloo, Gettysburg, Blenheim, Hastings, the fall of France and so on, you'll have a sense of what a game board of this kind is like.


The game itself is played by referring to commander cards. The British have Hill, Orange, Uxbridge, the reserve, Wellington, and Blucher; The French have Reille, Kellerman, the Guard, Lobau, d'Erlon, Milhaud, the Grand Battery, and Napoleon. Each card shows the enemy the command can attack, the range of results (xC denotes casualty; xM denotes morale loss) and whether the enemy has a counter attack option.


Cards can also be turned over if certain events occur (Hougoumont is captured, Hill's corps goes into square, Ney charges, etc.), and the reverse side gives a different range of options for attack or counter attack, or, for some cards, no options at all.

Play proceeds with the French player moving first to activate a command, consult the relevant card and roll the die. The 7th Coalition player then gets to react with a counter attack, use the reserve to cancel the French action, or else roll on a card of his or her own.

Play continues, with both sides accumulating casualties and morale hits, until one side fails a morale check and routs.

The initial dynamic is one of French attack and Allied defence. The Coalition player must react to French moves to prevent the French gaining a significant advantage, while also trying to activate Blucher as often as practicable in the hope that he will quickly make his presence felt on the field. As the French wear themselves out, the dynamic changes: the French search for the opening they need to activate Napoleon and push for victory; the Coalition player waits for the right moment to use Wellington's one-time general advance card and drive forward, hoping that this will be enough to win the day.


In my most recent play through I decided to use the unofficial 7th Coalition bot (see boardgamegeek), which offers a programmed response for solitaire play. The bot is not necessary for enjoyable solo play, but it seemed like a good excuse to get the game to table again, so why not?

Turn 1) The first move of yours truly as the French is to attack Hill with Reille. Both sides take a casualty. The bot activates Blucher, who rolls a miserable 1 and no Prussians arrive.

Turn 2) The French attack Hill again, now with the cavalry under Kellerman. Kellerman takes a casualty, but with Hill's corps now in square any further attacks by Reille's infantry on Hougoumont are more likely to succeed. The bot activates Blucher again, who rolls a 2 and once more no Prussians arrive.

Turn 3) Reille attacks again to get the benefit of the +1 to his die roll for Hill being in square. Hougoumont falls, and the Allied reserve must be used to cancel the result. A second Allied casualty results. 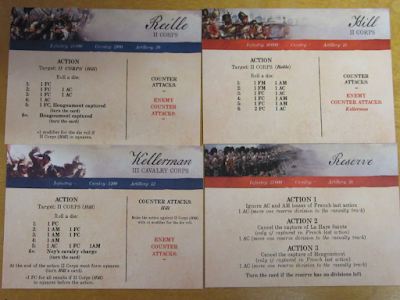 Turns 4,5,6,7) Reille continues to press the attack against Hill/Hougoumont. Hougoumont is hit and relieved three times in four turns. There are 3 French casualties and 6 Allied casualties, but now the Allied reserve is expended. When not pulling the reserve in to hold Hougoumont, the Allies activate Blucher - this time with some success.

Turns 10,11,12) The Grand Battery fires to wear morale down. The Coalition responds by activating Blucher. He arrives in increasing force but the French maintain their advantage in casualties and morale losses inflicted. The exchange is even enough that it benefits the French to keep on with a low-risk, low-but-almost-sure-reward approach.

13) The Allies are now within an unlucky morale roll of capitulating. Millhaud attacks to cause another Allied morale loss. Blucher is now on the field in force, and the French take a casualty.


14) The moment of crisis is almost upon the French. They are within reach of victory, but it is not yet assured. Before activating Napoleon for what is presumed to be the decisive push with the Guard, D'Erlon is ordered to attack Orange and soften up the enemy one more time. He drives in with considerable elan and rolls very high. The Allies take a casualty and a morale loss, then roll badly, fail the morale test, and rout.


The 'attack Hill' tactic worked again, and the bot, by failing to bring Hill out of square and back into line, helped render the Reille infantry attacks more effective. If the bot had brought Hill out of square earlier the cards tell us that his corps would have been open to a Kellerman counter attack rolling at +1, but at least Hougoumont would have had better odds of holding out, the reserve would have been maintained for longer, and with a Kellerman attack there was a higher risk of a French blow-out.

W1815 is a game of margins established by increments, and the ramifications of certain actions mean that player tactics in terms of which card to activate when become, over the course of a game, steadily more important. In this refight the initial high risk approach opened up a gap which the French only needed to maintain to force the win, but worse early dice and cannier bot play could have kept the Allies in touch and forced the French to either take more risks elsewhere or play conservatively and hope to time their final attack just right.

There is a lovely balance, and it takes time to see it.

So far, when playing as Napoleon, I swear by attacking Hill / Hougoumont, but it requires a run of good dice like the ones here to succeed.

The Grand Battery option (shown here), while seemingly safe, does not do enough 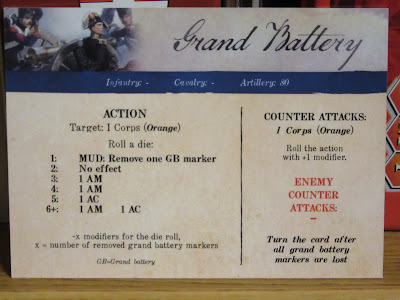 damage fast enough, and needs to be complemented by more aggressive play elsewhere. Nor does the Grand Battery attack force an Allied response: this then leaves Wellington free to concentrate on bringing those battle-winning Prussians onto the field, or to look at wresting the initiative in other ways.

I hope that this has shone a little light on what is a most enjoyable game. Most of my play has been solo, but I have a feeling that the more you play it with an opponent, the more other approaches will begin to suggest themselves.

It's a very fine game. It's beautiful to look at and the pieces feel good in the hand. It is enjoyable to study the cards and work out which combination of activations might work best given the board situation. If you have it, don't forget to play it; if you don't, perhaps consider pestering U and P for a reprint until you do!