The foraging party, or even Romans have to eat (Part II)

As detailed in the last post, our Roman foragers have run into feast in the east and a test in the west.

First to the east.

Two cohorts have moved into the wheat fields. One field is being cleared already, while the other is about to be. The Germanic cavalry and another cohort see if they can't break into the fortified village and rob it of whatever foodstuffs are in storage there.


But it's not so pleasant for the Romans in the west. Caught on the hop while crossing the river, the two leading cohorts have a mass of Gauls crash into them, and it's all the centurions can do to prevent panic. Another half hour of this and the Romans will likely break [Vicious attacks by the Gauls see 6 hits inflicted against 4 sustained]


The third cohort squeezes across the river into a support position, and in the nick of time the reserve cohort splashes across at the ford they so fortunately discovered last turn.


In the east the lone horseman seen an hour ago has arrived at the Gallic hill fort. Unbeknownst to the Romans, a muster is now underway, and the men will arrive at the fort within the hour. [A d3 roll determines how many turns it will take for the chief to organise resistance. Two is the result]


In the west the lead Roman cohort has had enough. Thrown into confusion and panic, the men pour back across the river. The victorious Gauls follow up and hit the supporting cohort before it can get out of the ford.

[The Gauls win initiative (d6 each minus attrition. Highest score strikes first) and get to deliver the first blow. They break the Romans and then catch the second cohort in the river. Again, they inflict heavy damage at the cost of just one further hit to themselves (cohort caught in the river gets half the usual number of attack dice)]

The central cohort hangs on, but only just. The reserve cohort and the last Gallic unit are strangely reluctant to close to close quarters. [Both fail their activation rolls]


And what's this? The Romans in the wheatfields are suddenly confronted by a terrifying sight - Gauls coming out of the woods! It must be the menfolk from the village.


But in an awful turn of events for the would-be Gallic saviours, the Romans succeed in finding a weak point in the village defences and break in through the wall. They commence ransacking the place for stores, and no doubt will do worse if they have time. 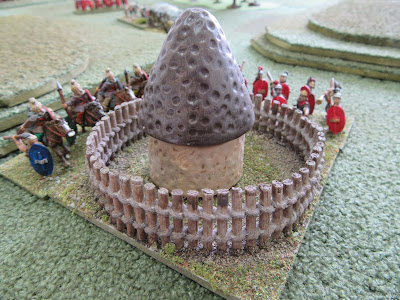 The fall of the village stuns the newly-arrived Gallic warband. They pause, unsure of what the best course of action might be. For the Romans, the first cohort starts loading freshly harvested wheat onto the train, while the other cohort covers for them.


Back in the west the fight goes on. The reserve cohort has now engaged the third Gallic unit, and the Gauls continue to have the advantage in the other two fights. The danger is such that another reserve cohort is hurrying to the scene. The baggage train realises that it will not get across the river, and, calling it quits for the day, hastens back to the safety of the camp.


The map after three hours of daylight.

Yet hark: what's that sound coming from the north? Not Gallic war horns, surely?