The foraging party, or even Romans have to eat (Part I).

It's 56BC, Gaul, harvest season, and Caesar's legions are running short of food. It's time to do a little foraging. The Thirteenth legion has been instructed to go north of the river, into Gallic territory, and raid. They have eight hours to do their work, and must bring back as much forage as they can. Five loads would be a good effort, but you never know what might happen over there...

The temporary commander of the Thirteenth - Aaronius Bellicus Minimus - sends three cohorts and a wagon train to the ford northwest of the camp. Four other cohorts, a detachment of German cavalry and two trains are to cross the northeast ford. The remaining three cohorts will be held in reserve to cover the return crossing or to advance and fight if the foragers get into trouble. Orders are that the foraging cohorts are to take light equipment only.

There is some delay as the troops reach and then begin to file across the fords.


The main group advances without opposition, despite the terrain offering good potential cover for roving Gauls. So far so good!


But in the west they are not so lucky - three gallic warbands suddenly spring from the woods and catch the Roman column still in the ford. Alarums blare!

Hearing the call for assistance, one of the reserve cohorts hurries west, hoping to find a crossing point closer. Fortunately, a scout discovers one just half a mile away. [A very lucky scouting roll of 6 allows them to find a new ford]

The western column has just enough time to rush a following cohort across the river before the Gallic attack hits.

The other column is having a far happier time. Wheat fields, a village, and a strange obelisk in view, but no sign of the enemy in any strength.

The forward-most cohort begins harvesting wheat while the rest come up.

But their activities are not unobserved. In the distance a lone, proudly seated horseman takes in the scene, then gallops off towards the west. 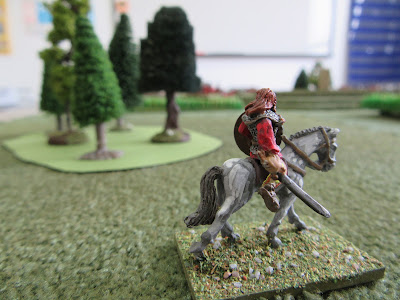 [The game is a solitaire encounter scenario inspired by Stuart Asquith's book on solo wargaming. A simple dice mechanism is used to check if and where enemy forces are generated in response to the Roman moves. The fighting rules are an adapted form of Dan Mersey's Dux Bellorum]