And so we turn to the second game in our Lost Battles Alexander campaign. This time, Issus.

Alexander debouched onto the plain as the Persians awaited him behind the Pinarus... 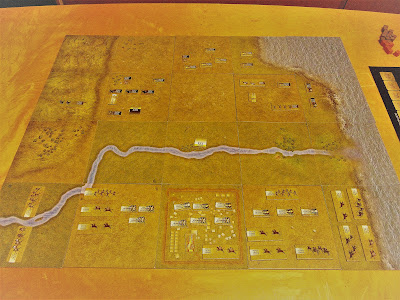 ... and we switch to our easy-to-see troop outlines. As before, Macedonians in red, Persians in blue. 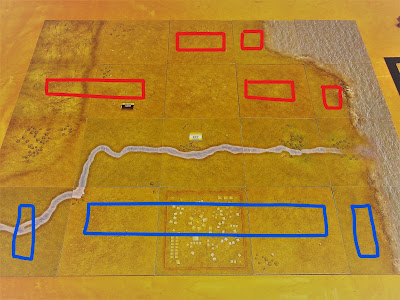 Turn 2: the Persians advanced into their key zone so as not to take a morale hit, but left an enticing gap for Alexander himself to advance into if he was game.

It turned out he was. 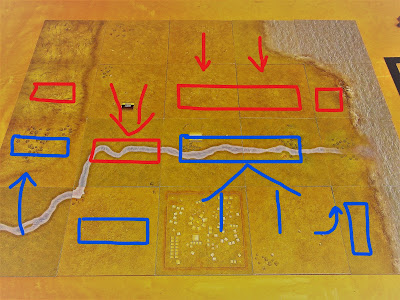 Turn 3: fighting in the foothills goes the way of the Persians. Elsewhere also the fighting is fierce, with hits scored on both sides. The Greek mercenary hoplites give a particularly good account of themselves, and there is tension as the 'Favour of the Gods' marker changes hands several times during the clash. 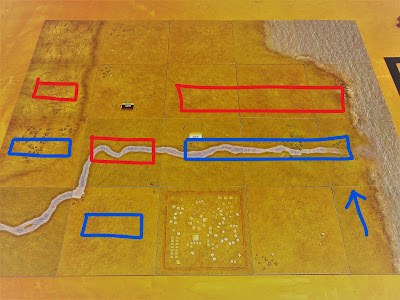 Turn 4: Alexander's Hypaspists and Companions put the enemy in the centre left to flight, and these carry off the light infantry with them, much to the relief of the Prodromoi (who were looking decidedly shaky up in the foothills). The rest of the Persian line holds, and Parmenion is rather disappointed with his Thessalian cavalry - they have not performed as vigorously as their fame would have suggested. 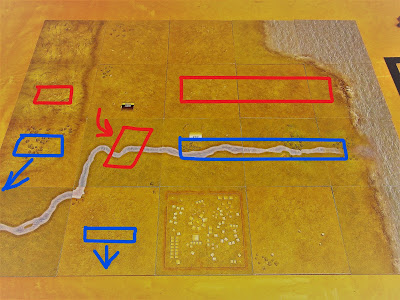 Turn 5: the Persian cavalry now shatters a unit of aforementioned Thessalians, but on the Persian left the camp falls, and with Alexander around the flank and bearing down upon him, Darius - he's not rated timid for nothing - gathers his bodyguard and flees.

With the king gone no one else feels much like sticking around either, and Alexander claims the victory. 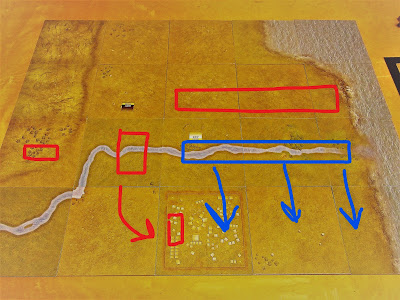 It has been a hard-fought battle. Although the Persians have lost the field they have done just enough damage to the Macedonian army to win on points, 102 to 97. 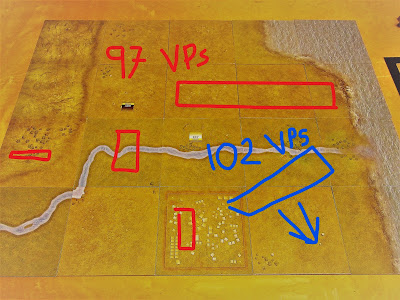 A very close game, and whoever the guy who soloed it is, he's ruing the fact that he forgot to use Alexander's ability to steal turn initiative (but we won't talk about that!).

So, after two battles, it's one win apiece. Gaugamela is calling....
Posted by Prufrock at 11:14 AM