It's been some time between painting posts, but with the New Year break approaching a light has appeared at the end of the work tunnel and instead of the grim struggle to get through each day, week and month dominating one's thought, there is a daily-strengthening interior voice that goes something like 'oh, good, game day is approaching!'

To that end, I've been clearing up a few odds and ends.

I tried to clear up about a hundred Celts, but that turned out to be beating a fragile head against a plaid wall, and I thought, to paraphrase Robert Plant, 'little Gauls, I'm gonna have to put you down for a while.'

Thankfully, there were a few Miniature Wars (ex-Strategia-e-Tattica) Crusaders in one of the primed boxes to get to grips with. These will do double duty as Normans (I know, a little dubious, but I don't have any other figures that can pass for Norman foot). 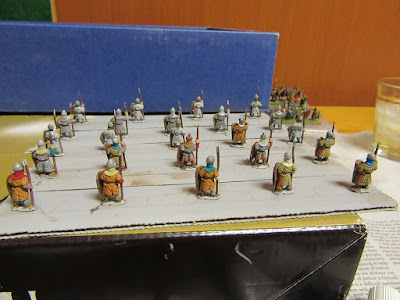 Another night or two should see them finished, and the painting tally may end up being added to before the year is done after all.
Posted by Prufrock at 1:37 AM