Today saw a spot of naval action as Pat H. made the trip down to house Prufrock for a day of gaming. First up was the boardgame Flying Colors, in which Pat gave me an absolute thrashing at the Dogger Bank, 1781. He broke my line, killed my admiral, sank two of my ships and utterly demolished my poor Dutch. I think I need to work on my tactics!

For the second game we tried out Naval Thunder, employing some newly launched vessels from out of the Navwar yards.


Long range shot from Bismarck immediately disabled Hood's main turret forward, which gave rise to hopes of a quick ending, but Hood was made of stern stuff today. Events soon settled into a routine: Hood and Prince of Wales would bracket Bismarck with shell; the German monster would pound Hood; her assistant Prinz Eugen would worry Prince of Wales.

As flood and engine damage slowed Hood down, she switched her fire to Prinz Eugen.

Prinz Eugen herself caused an ammunition explosion on Prince of Wales with a lucky shot.


A the ranges close, Prince of Wales' fire on Bismarck begins to find its mark more regularly. There is a bridge hit; flooding; explosions in secondary armament. Hood abruptly turns away from the fight, but even so Bismarck is forced to switch fire from the Hood to give Prince of Wales something to think about. 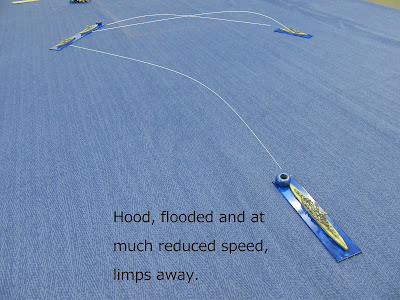 Both German ships continue to fire on Hood. Finally, she sinks beneath the waves. But Prince of Wales has used this time to absolutely pound Bismarck.

Prince of Wales is now on her own, but it may not matter: Bismarck is in difficulty. She is flooded, on fire, and a main gun turret is out of action.

Bismark attempts to run, but, increasingly waterlogged, it becomes apparent that she must sink Prince of Wales or be sunk herself. Accordingly, she turns back to the fight. Meantime, Prinz Eugen, who has been attempting with some success to distract Prince of Wales, closes to torpedo range.

Bismarck survives another barrage of hits, but Prince of Wales must be close to her limit as well.

Eugen fires and awaits the results of her handiwork.

And the torpedo strikes. Prince of Wales breaks in two!

The Germans have won the day, but it has been a painful fight, and there is a lot of work needed to stabilise Bismarck for the necessary run back to safety and repair. She is just ten hull points off sinking; another broadside would likely have been the end of her. Prinz Eugen is hurt but in comparatively good shape. It will be a long journey home, and they will be the hunted....


Flying Colors I already know and like, but I thought Naval Thunder gave a cracking game. It is fairly fast moving, and although it took a while to get through the turns, it was a first game, and the ships involved were tough old nuts to crack. I'm very keen to get more ships painted for this, and will need to figure out the rules a little better (I've already found a couple of critical things we (more likely I) did wrong, and once I've done this I'll probably do a fuller review.

It was a rush to get the ships finished in time (and the basing is still of the temporary variety), but necessity is the mother of invention, and the urgency helped me to get past my 1/3000 painters block and just get on with it.