I've always found Sentinum, 295BC, to be an interesting battle. It comes about after a coalition of Etruscans, Umbrians, Samnites and Gauls is formed to crush the Romans and their expansionist, land-grabbing, colony-founding, alliance-demanding ways.  Livy's account of the Third Samnite War, which begins in 298BC, can be read here.


The gist of it is that the Romans, having expanded south to include Campania in their sphere of influence, find the Lucanians asking for assistance in a conflict they are having with the Samnites. The Picentines have already told the Romans that the Samnites are arming for war, so there seems to be no other option (or at least a good excuse) for the Romans than to look to their own arms. A treaty is concluded with the Lucanians, the Samnites are invited to withdraw from Lucanian territory and, when they refuse this, war is declared.

It's a busy time for Rome: she is already embroiled in a war with her northern neighbours, the Etruscans. The two consuls for the year therefore split the threatres between them. Scipio goes to Etruria; Fulvius to Samnium.

Both consuls win victories, despoil the land, and the progress of both campaigns appears to be good (for the Romans - not so much for the people and their cattle!).

The following year however, things draw to a head.

Just as the consular elections were coming on, a rumour spread that the Etruscans and Samnites were levying immense armies. According to the reports which were sent, the leaders of the Etruscans were attacked in all the cantonal council meetings for not having brought the Gauls over on any terms whatever to take part in the war; the Samnite government were abused for having employed against the Romans a force which was only raised to act against the Lucanians; the enemy was arising in his own strength and in that of his allies to make war on Rome, and matters would not be settled without a conflict on a very much larger scale than formerly.

To deal with the coming crisis the greatly respected Fabius Maximus Rullianus is elected consul for the fourth time. Although he wins a victory over the Samnites at Tifernum and his colleague Publius Decius Mus defeats the Apulians, neither victory is decisive.

The next year of the war sees the emergence of the Samnite Gellius Egnatius, who endeavours to convince the Etruscans to combine with him in the fight against Rome. There are battles in Etruria and Samnium, but despite Gellius's efforts, the Romans are victorious.

Finally, in 295, Rome's neighbours have had enough. Gellius's counsel is heeded, and a grand coalition of Etruscans, Umbrians, Samnites and Gauls forms. To meet this threat the Romans again appoint Fabius and Decius consuls.

Things do not start well. There is Roman infighting, and a defeat is visited upon an army under the former consul, Scipio, before Fabius and Decius get things moving. They join forces and advance into Umbrian territory, descending into the district of Sentinum. The four nations opposing them are split into two forces: Etruscans and Umbrians; Samnites and Gauls. The plan is that the Samnites and Gauls will do battle while the Etruscans and Umbrians make an attack on the Roman camp.

These two armies together would be too strong for the Romans, but with the aid of information from deserters the consuls concoct a ruse to draw the Etruscans away. The ruse works, and the consuls do their best to bring on a battle with the Gauls and Samnites while the other army is absent.

On the third day the whole force on both sides marched down into the plain. Whilst the two armies were standing ready to engage, a hind driven by a wolf from the mountains ran down into the open space between the two lines with the wolf in pursuit. Here they each took a different direction, the hind ran to the Gauls, the wolf to the Romans. Way was made for the wolf between the ranks; the Gauls speared the hind. On this a soldier in the front rank exclaimed: ‘In that place where you see the creature sacred to Diana lying dead, flight and carnage will begin; here the wolf, whole and unhurt, a creature sacred to Mars, reminds us of our Founder and that we too are of the race of Mars.’

The Gauls were stationed on the right, the Samnites on the left. Q. Fabius posted the first and third legions on the right wing, facing the Samnites; to oppose the Gauls, Decius had the fifth and sixth legions, who formed the Roman left. The second and fourth legions were engaged in Samnium with L. Volumnius the proconsul.

The Lost Battles scenario for Sentinum uses the following orders of battle.

Romans: four legions and allies under P. Decius Mus and Q. Fabius Rullianus. In addition to the normal complement of cavalry, 1000 Campanians are present.

Coalition: the numbers are uncertain, but 33,000 casualties are mentioned. The Lost Battles scenario posits around 40,000 men.

This is how the armies deploy on table. 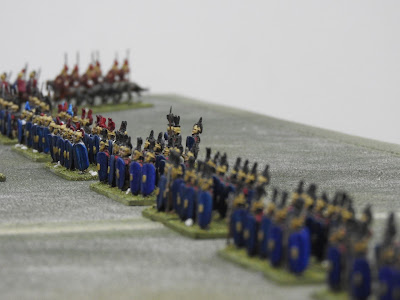 Fabius and the Roman centre. 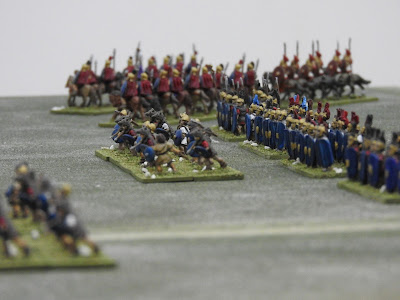 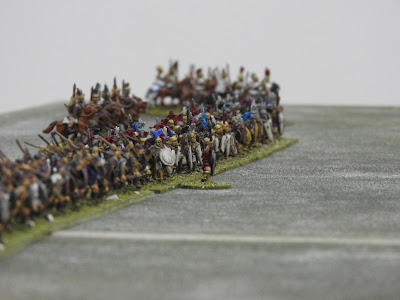 Gellius Egnatius and his Samnites. 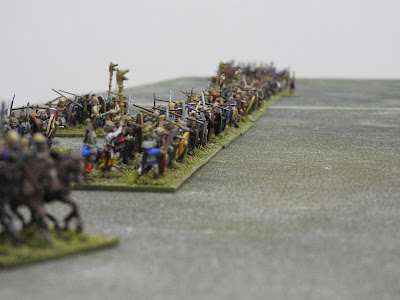 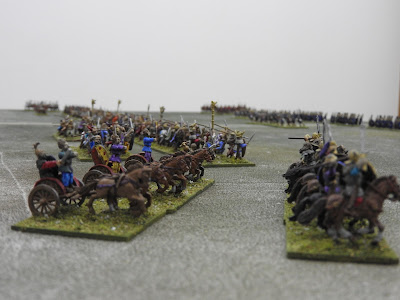 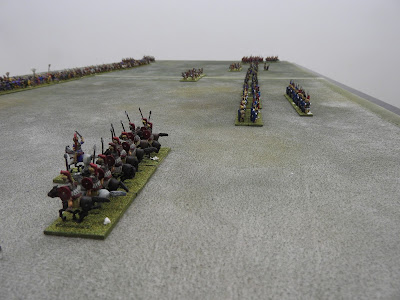 The Roman line from the perspective of Decius Mus. 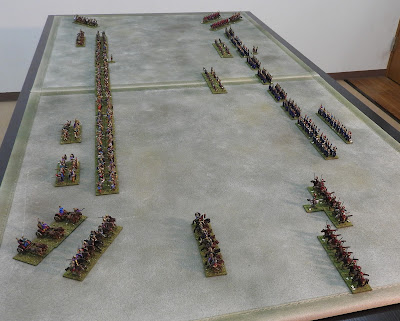 Next post will be a report on the battle itself.