Samnites. These guys have been a long time coming. They started out as some Strategia e Tattica figures I grabbed to make a unit or two for Sentinum, but after thinking that two units is a sad lot I ordered more from Old Glory to fill them out into a decent host.

Although I usually like the figures of both companies, for some reason these packs just rubbed me the wrong way. The Old Glories have an odd 'hoplite, forward!' pose where our man is head down, shield off to the side, and bursting forward eagerly. Naturally, his is the dominant pose in the pack.

Both sets are clumsily sculpted (or at least come out of the moulds in that way) and the greaves in particular are tricky to do without missing some bit you have to go back to later to touch up.

So, a bits and pieces mob, and a bits and pieces paint job. I've had these in some stage of go for about two years, and each time I opened the box and did a little bit I would get severely brassed off and then leave them.

There were also issues with colour choice and shield decoration policy that I couldn't quite settle.

But I finally decided to fix them up, give them the dip, and just finish them, no matter how bad they looked. So here they are. 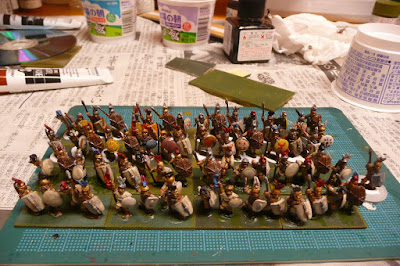 I'll do a proper shot after they are flocked, but this is my little celebratory signal to self that, to paraphrase Sir Edmund Hillary, we knocked the b******s off.