Introducing the boy to wargames

Our wee lad has recently started taking an interest in the hobby room and 'dad's stuff'. He asks to play Dungeon Quest, sets up and moves around some plastic Orcs, and when yesterday he saw Luke and I playing our games sat in a watched for a bit. Although I had to tell him not to touch a couple of times he was pretty good around the figures, so I promised that he and I would have a game today (a public holiday, yay!).

Accordingly, when my wife and the girls went out with O-chan for a stock up on winter clothes we set up a little board and got some 6mm models out, because he had been particularly impressed by the tanks on display yesterday.

He got to place trees and things wherever he liked, and then I gave him a measuring stick to use for movement and we'd dice to fight. He loves rolling dice and gets just as excited when he misses as when he hits. 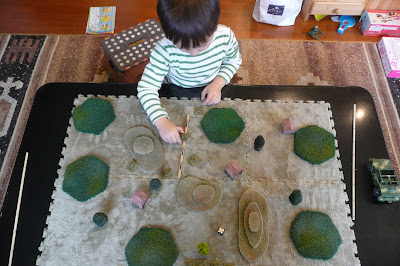 He quickly picked up on how to use the measuring stick. 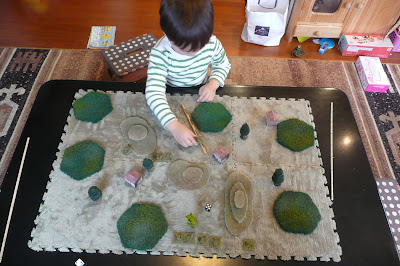 And was like an old-timer by the end of his first turn!

Second game he got to choose some different models to use, and for the third we added in a plane on his side which rolled two dice and hit if both were 5s or 6s.

He loved it, won all the games, and got very excited when I accidentally rolled a pile of 6s in the last game to almost win it. When he triumphed by the skin of his teeth he jumped up and said 'yes' and was a happy little camper.

Lots of fun for dad, too. He's only four, so if this continues we might have a real gamer on our hands!
Posted by Prufrock at 6:24 PM

Email ThisBlogThis!Share to TwitterShare to FacebookShare to Pinterest
Labels: games for kids