Following on from where we left off in the first report (read it here), it is now the Pompeians who must consider how to win the final banner and claim game victory. Labienus elects to order three left and advance. He does not expect to win the battle this turn, but will push the Caesarians back towards their baseline, try to retain the initiative, and hope for a useful card to come up next turn. 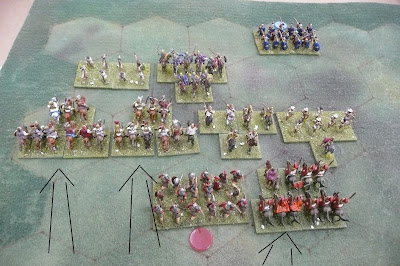 The first step in pushing back the enemy is to attack the light cavalry supporting the heavy cavalry. These lights are allowed to evade the attentions of Labienus, but in doing so will be forced back onto the base line. 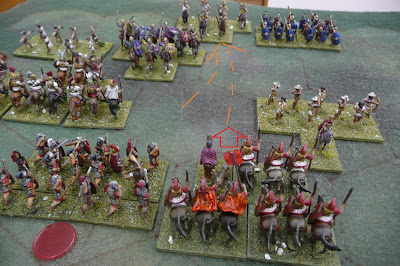 The second step is to drive off the slingers supporting the cavalry's right. Again, the slingers can evade, but they will also be forced back onto their own baseline. They could stand in place, but a retreat result would be devastating, allowing the Pompeian cavalry to follow up and and attack again. Taking the evade is the least risky of the two options at this point. 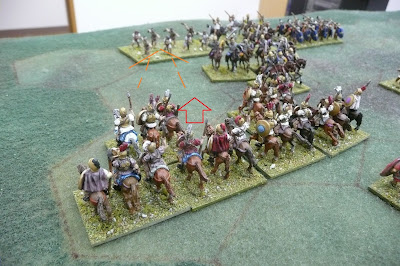 The third step is to attack Caesar's Gallic/Germanic cavalry. There is risk attached, but there is a small chance of winning the battle here, and not attacking at all will hand the initiative back to Caesar. The attack is made. Three dice are rolled, each with a 1/3 chance of hitting, and an outside chance of winning by rolling two retreats. And the roll return is... 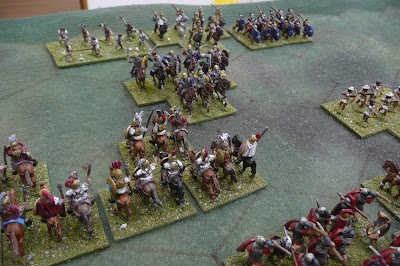 ...three hits out of three! The cavalry are cut down where they stand; the Optimates are victorious!

I hope readers have enjoyed following this report as much I did playing it! Thanks for reading.