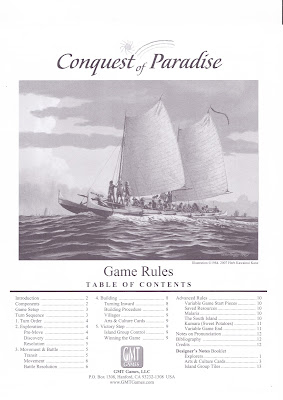 On Sunday night I was lucky enough to be able to assemble a crew of three to join me in a board game. One of the players had played before; the others were wargaming newcomers.

Due to the mix of people and interests I wasn't sure which game to use, but the more I thought about it the more it seemed a good chance to try out GMT's Conquest of Paradise. It being a world-exploring, civilisation-building game with warfare as just one aspect of play, I thought it would be a better intro to the various possibilities of gaming than, say, Risk or Axis and Allies. As most of the players were Kiwis, I suspected the Polynesia, 500 AD setting might appeal.

The biggest concern was whether I would able to learn it well enough in five or six hours to be able to explain it to a group. I needn't have worried: it's amazing how a bit of pressure can kick the brain into gear!

I forgot a couple of things at start up, but aside from that it all went reasonably smoothly. The key was following the turn order closely. Once routine took over, all was fine.

In Conquest the players begin each controlling one Pacific island chain (Tonga, Samoa, etc) on an ocean board made up of independent islands and blank, here-be-sea monsters hex spaces. Players take turns to explore the unknown areas in the hope of discovering new island chains which they may attempt to colonise and improve. Over time the empires will run out of space to expand peacefully and will come into conflict.

The goal of the game is to gather the number of victory points needed to claim a win, with VPs obtained by controlling territories, building villages and by purchasing 'Arts and Culture' cards.


There are four phases to the game turn - exploration, movement and battle, building, VP calculation - each of them with its own distinct character.

The exploration phase sees players activate their explorer token to search unknown hexes. These searches are conducted by drawing a chit from a cup, with the chit indicating whether an area is an island chain, open sea, or the explorer has gone off course.

If an island chain chit comes up, the active player draws a terrain hex at random from the pile. Each island tile shows a combination of resources to be exploited by building villages or developing agriculture. Players have the option of keeping up to three of their island discoveries secret, and with some areas being obviously richer in resources than others, it can be useful to keep quiet about what you've found.

The player may continue exploring by moving into another hex and repeating the process, but must beware of pushing luck too far, as unfortunate or foolhardy expeditions will cause the explorer to be lost for the following turn.

The second phase is the movement and battle stage. Players move their colonies and transport canoes (or their warriors and war canoes) about the place, either to colonise an unoccupied island chain or to attack islands that are already populated.

An interesting aspect of the movement system is that the rules encourage each player to make up a network of linked transport canoes to facilitate immediate, cost-free transportation of units to any connected island chain under the player's control. Used in this way the transport canoes function like roads or railways, and building up a canoe network as you expand is essential if you want to challenge for the win.

Although the expansion of your transport network is something you can plan for, certainty goes out the window when it comes to battle, for it is entirely luck-dependent. Combatants line up opposed combat units, roll a die, with positive results for the attacker 50% of the time and negative results for the remainder. You can control how many warriors and war canoes you bring to a fight, but you are not always sure how many enemies there will be because counter stacks are hidden face down, and there are dummy units in the game as well.

Combat is essentially an expensive lottery. There are a couple of approaches players can take in preparing for the post-combat retreat of defeated forces, but fighting is probably not something that you want to be doing unless you really need to.

The build stage comes next. Naturally enough, players create units and build improvements in this phase, and can also take control of island chains by converting colonists into villages.

That the build phase comes after the movement phase means that to colonise island chains players must move a colonist unit onto the unclaimed island in the movement phase and then use the build phase to convert said colonists into a village, thereby taking control of the island. If that sounds headache-inducing as I've written it, in the game it is actually quite easy!

With building done the turn (and possibly the game) concludes with the Victory phase. Here players tally up the number of villages they own and island chains they control, scoring one VP for each respectively. They also add any VPs on revealed Arts and Culture cards and, should anyone have reached the victory level, that player is declared the winner.

However, getting the victory score alone may not be enough: you also need to score more points than any of the other players to secure the win.

Because the victory phase comes immediately after the build phase - in which players may convert claim territories and create villages - it is possible to increase victory points dramatically from one turn to the next. With careful planning and husbanding of resources it is not impossible to steal the win with a massive last-minute points haul.

With experienced players I feel that the endgame strategy would become very cut-throat!


The game played smoothly and everything flowed well. The turn order seemed right, and there was a natural progression from one phase to another, with players able to quickly grasp how early decisions would impact on the later turn.

It works well with two or four players, and would no doubt also be fine with three.


The game used hidden information very well. Unit stacks are not revealed until battle is declared, and with dummy markers floating around there can be quite a bit of uncertainty about just where other players are concentrating their combat strength.

Battles are luck-dependent, but a careful reading of the game situation will allow astute players to gain an advantage by knowing where and when to fight, and planning accordingly.


I found the empire-building aspects of the game to be simple but enjoyable. Exploring, founding villages, colonising island chains and expanding your transport canoe network came together in a strangely satisfying way.


We were feeling our way for the first couple of turns, but people quickly picked up on effective strategies for expansion. The battle strategies were probably less than perfect, but in a learning game the whole point is to try things out, so I daresay next time people would be a bit more focused in their 'application of force'.

I can see already that among canny players the final push for victory will lead to many different strategies. Foxing, last-second VP builds, invasion of the others' islands, sneak attacks to sever transportation networks, diplomatic coups, card build-ups and no doubt plenty of other things would all have their place.


The board and terrain tiles are nice, but the counters are a little boring and the different sides are so similar in colour that it can be hard to distinguish them from one another.


This is a genuinely playable lite-civilisation game, and for me, the other gamers (and yesterday my daughter!) a genuine winner already.