I had the chance to have a couple of friends come over for a game the other night and in line with recent musings about accessible rules I decided to try out a 'derivative ancients' scenario.

Units and combat were based on Commands and Colors: Ancients, but without the heavy/medium/light distinctions.

Four figures per base meant four attack dice, three figures three attack dice and so on.  All movement was by hex, as per CCA, and shooting was as javelin-armed shooting in CCA.  Unit casualties were removed in bases so it would be easy to see how strong/weak the units were.

Most of my CCA boardgame gear is back in New Zealand, so we used normal dice for fighting and although I have some cards here we used die-roll activation rather than activation by card play.

The activation rules were simple but they gave plenty of scope for players to do what they wanted to do while also giving them some tough decisions to make.  It also avoided adding the extra layer of complexity that using a card system for activation would have entailed.

The scenario was going to be important. I went for a famous battle that had both sides fairly evenly matched and that did not have much in the way of terrain to worry about.  Given the armies I have painted at the moment, Zama was the obvious choice.

I would umpire to give rules advice and help keep things going if the guys got bogged down with options.

To win the game would require nine victory points, with VPs to be scored by destroying enemy units.

The first picture (below) shows the game after the opening move, in which M (as Rome) advanced his light infantry to pepper the elephants and the left wing to threaten the Carthaginian right. 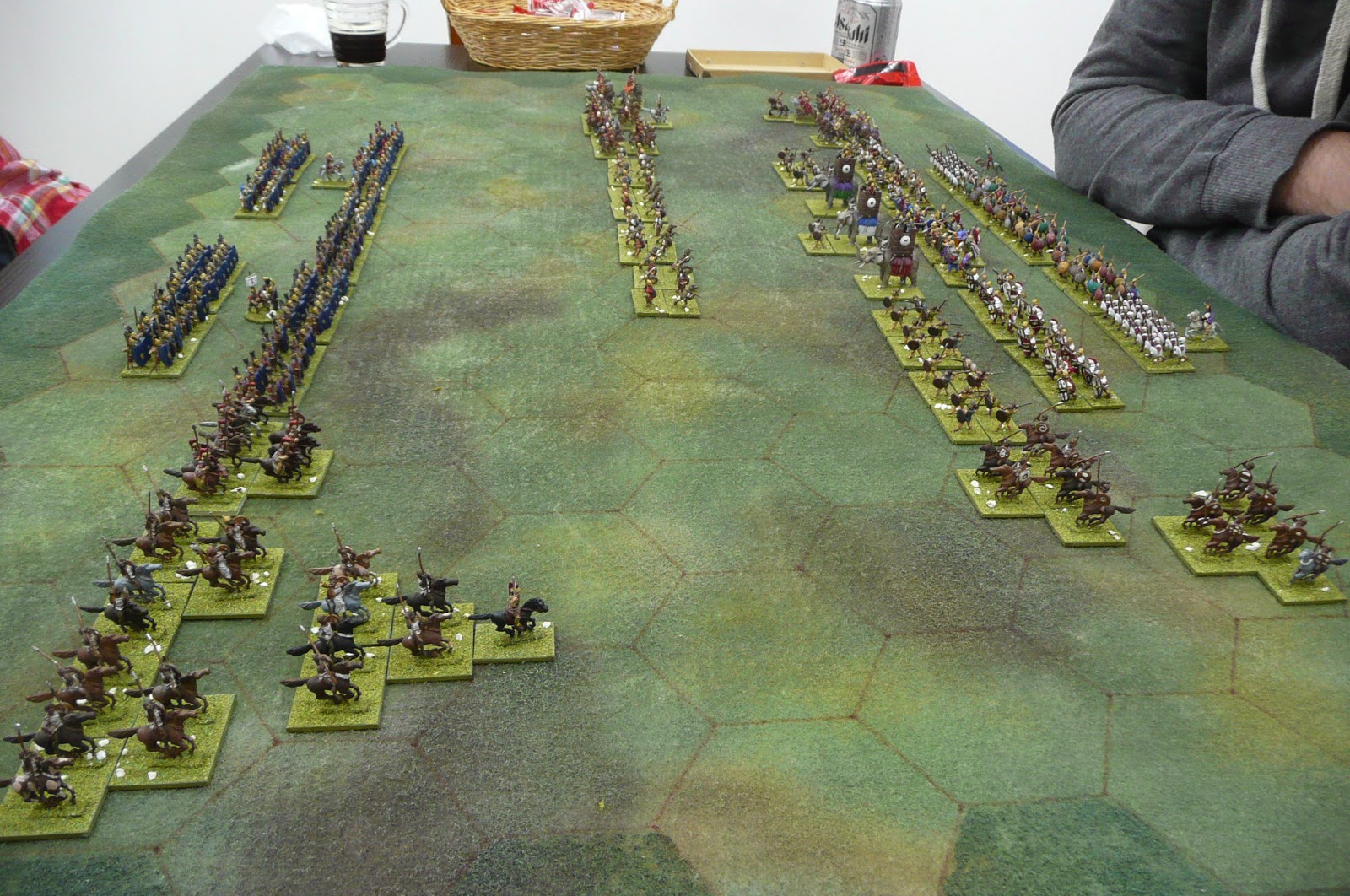 B (as Carthage) responded by shielding the elephants with his own lights and advancing cavalry on both flanks. 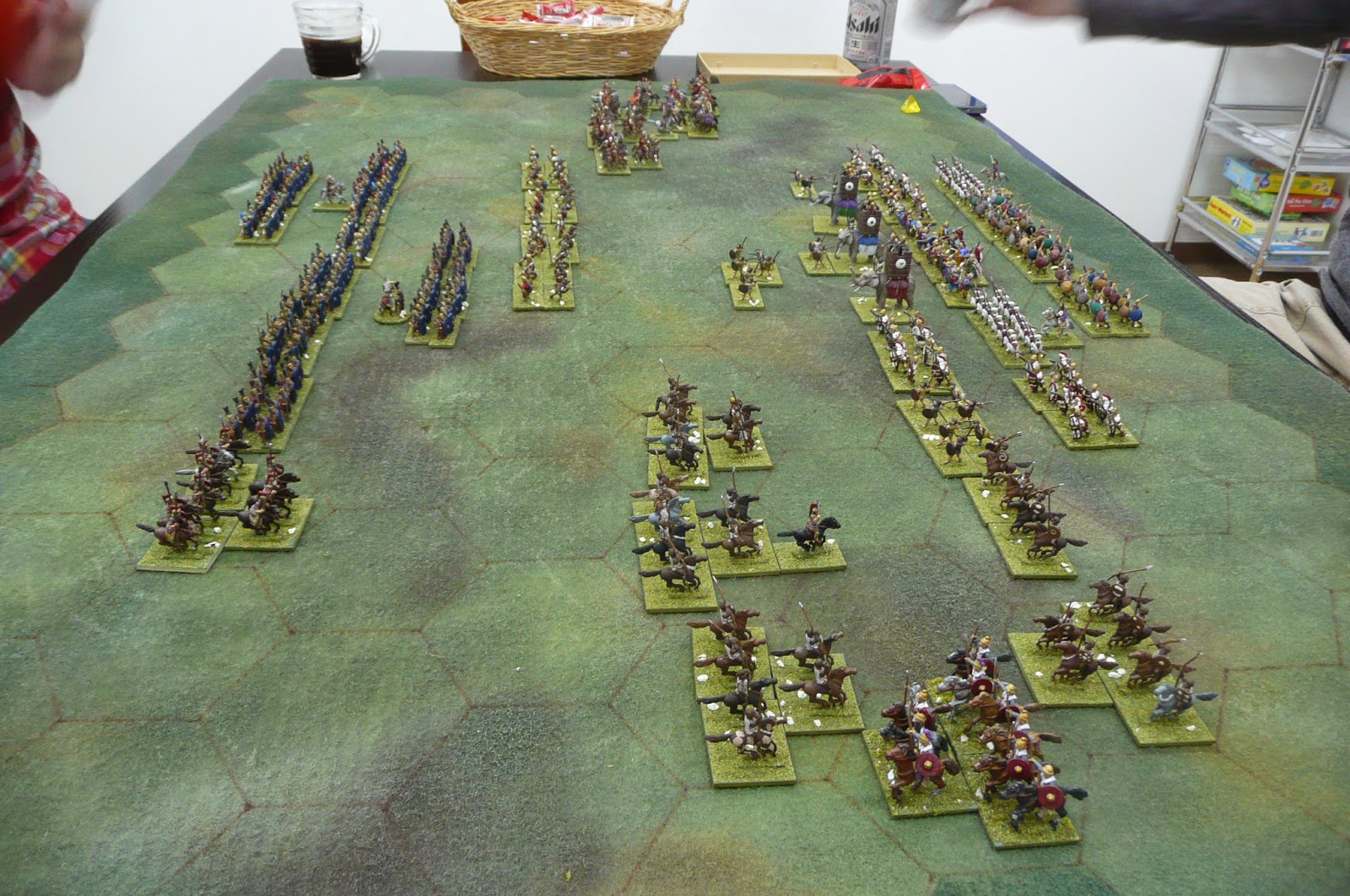 Rome took a points victory in the tentative tussles on her right but Carthage got a clear advantage on the other flank (seen below) by virtue of some bold cavalry attacks. 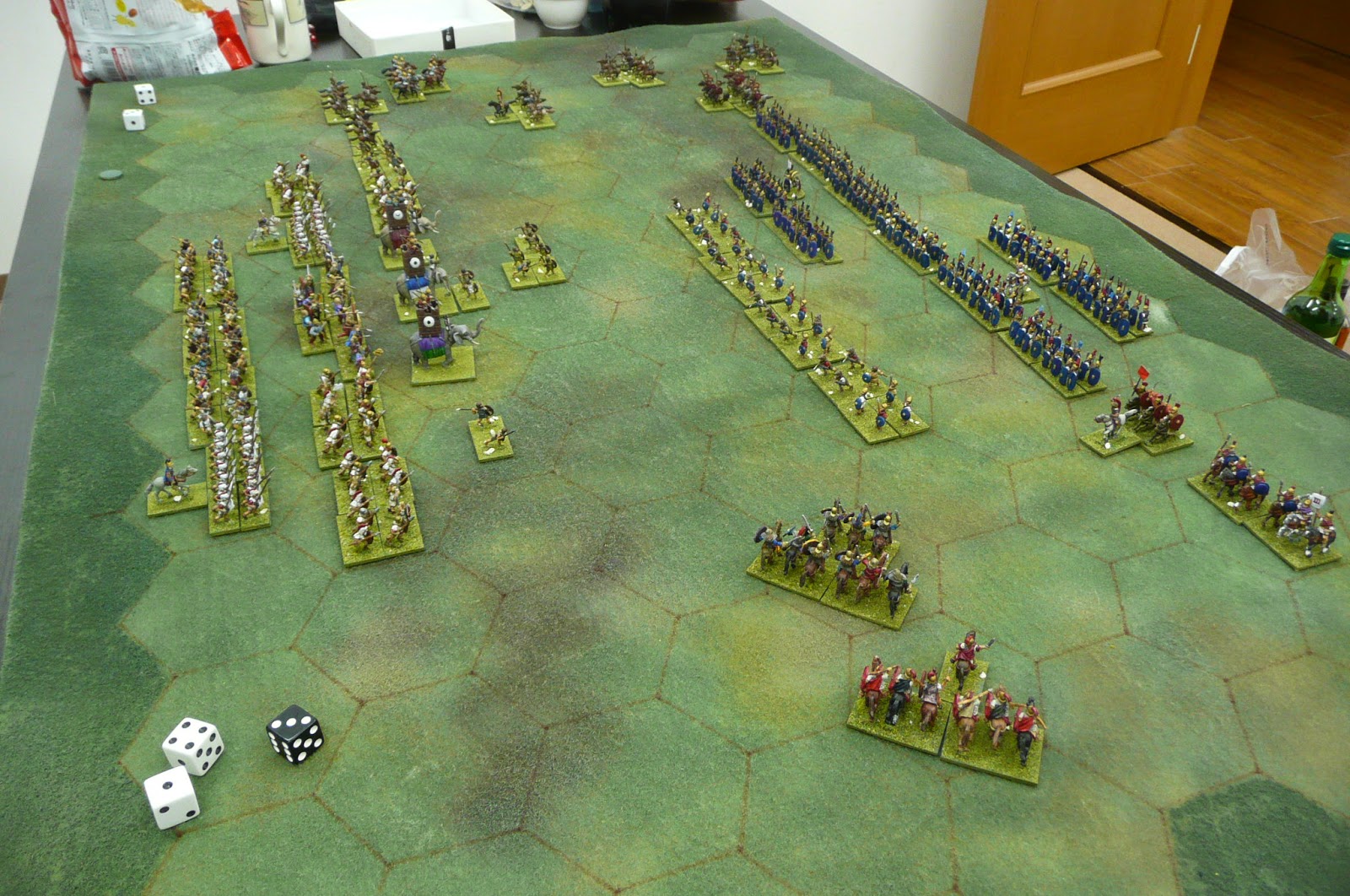 B opened up a 6-1 advantage in unit kills over the Romans and it seemed that Hannibal might have an easy win.

But things were not quite as one-sided as it would appear from the score alone: the Carthaginians had six units reduced to just one remaining base, so if the Romans could get in close enough they would be able to even things up reasonably quickly. 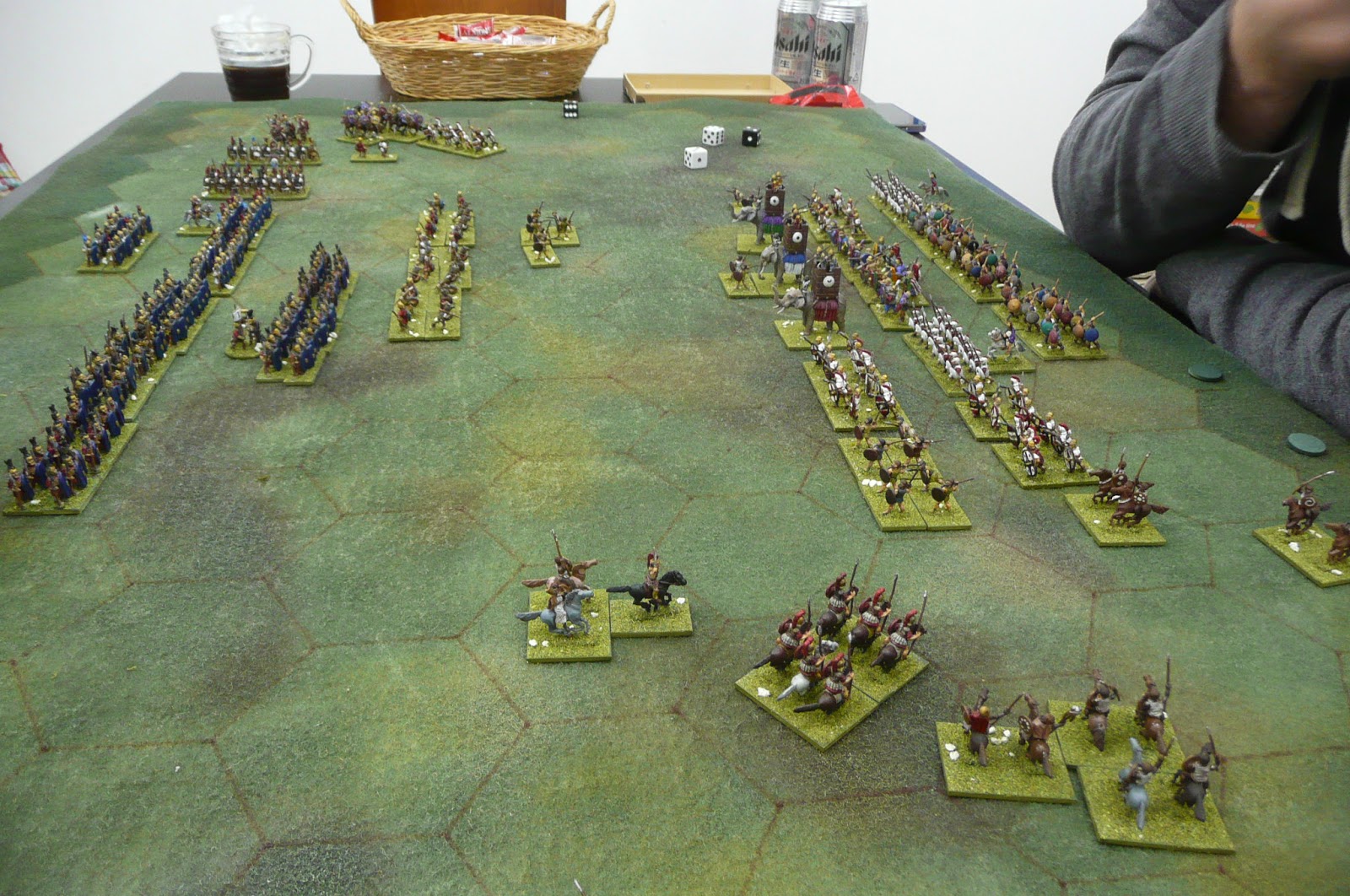 But this was the time when Rome went through a low-pip period, and her attempts to polish off enemy units with missile fire from the Numidians did not go to plan.  Still, the Roman advance got underway in the centre, which caused B to worry for his elephants again. 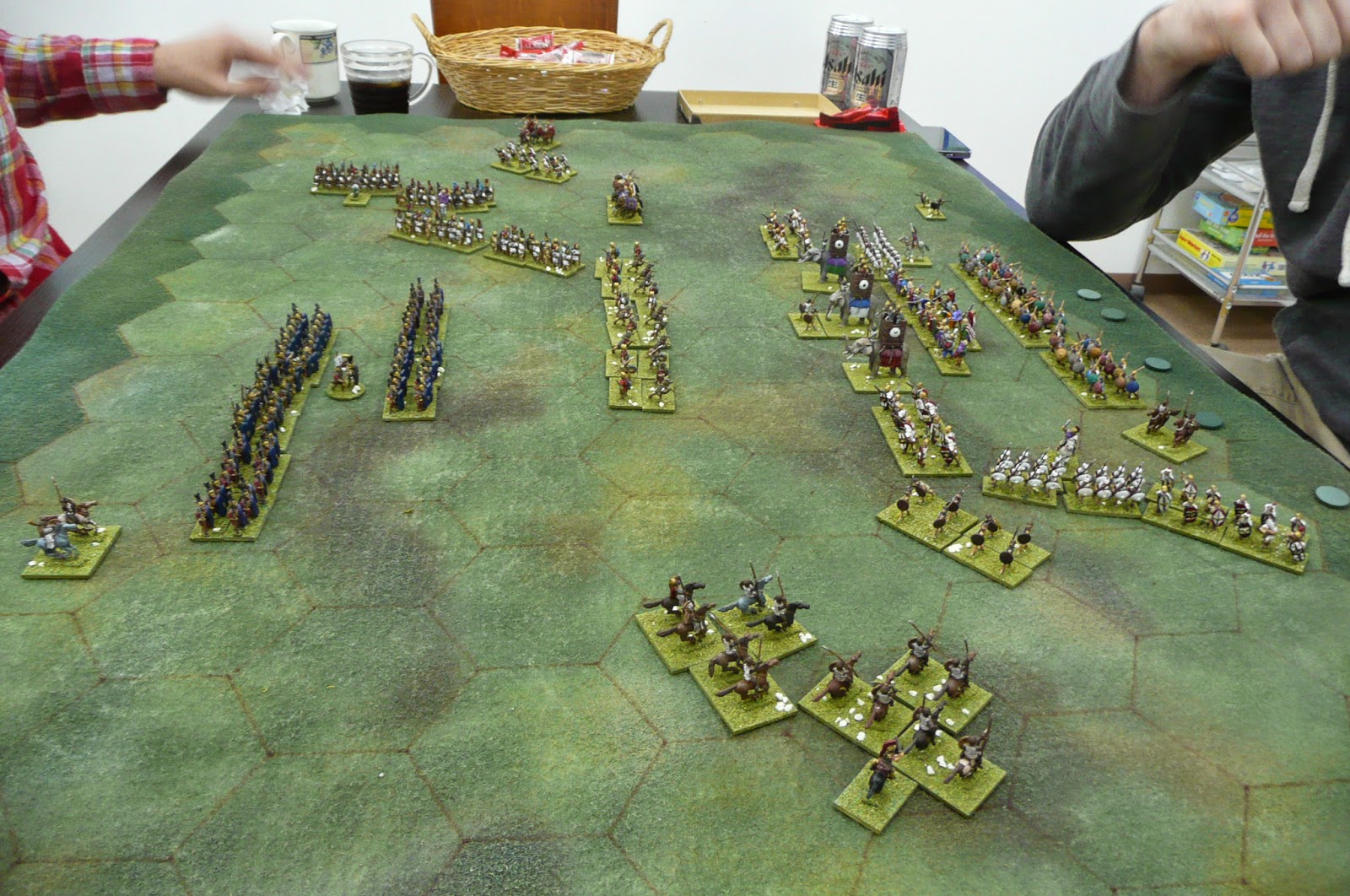 As M's missile volleys drew closer, B advanced troops out of the line in an attempt to drive off the offending velites. In the confusion the Romans began to score some successes against those already reduced Carthaginian units, bringing the victory count to a more respectable 6-4, and opening up the possibility of picking off some more (if only the javelin men would shoot straight!). 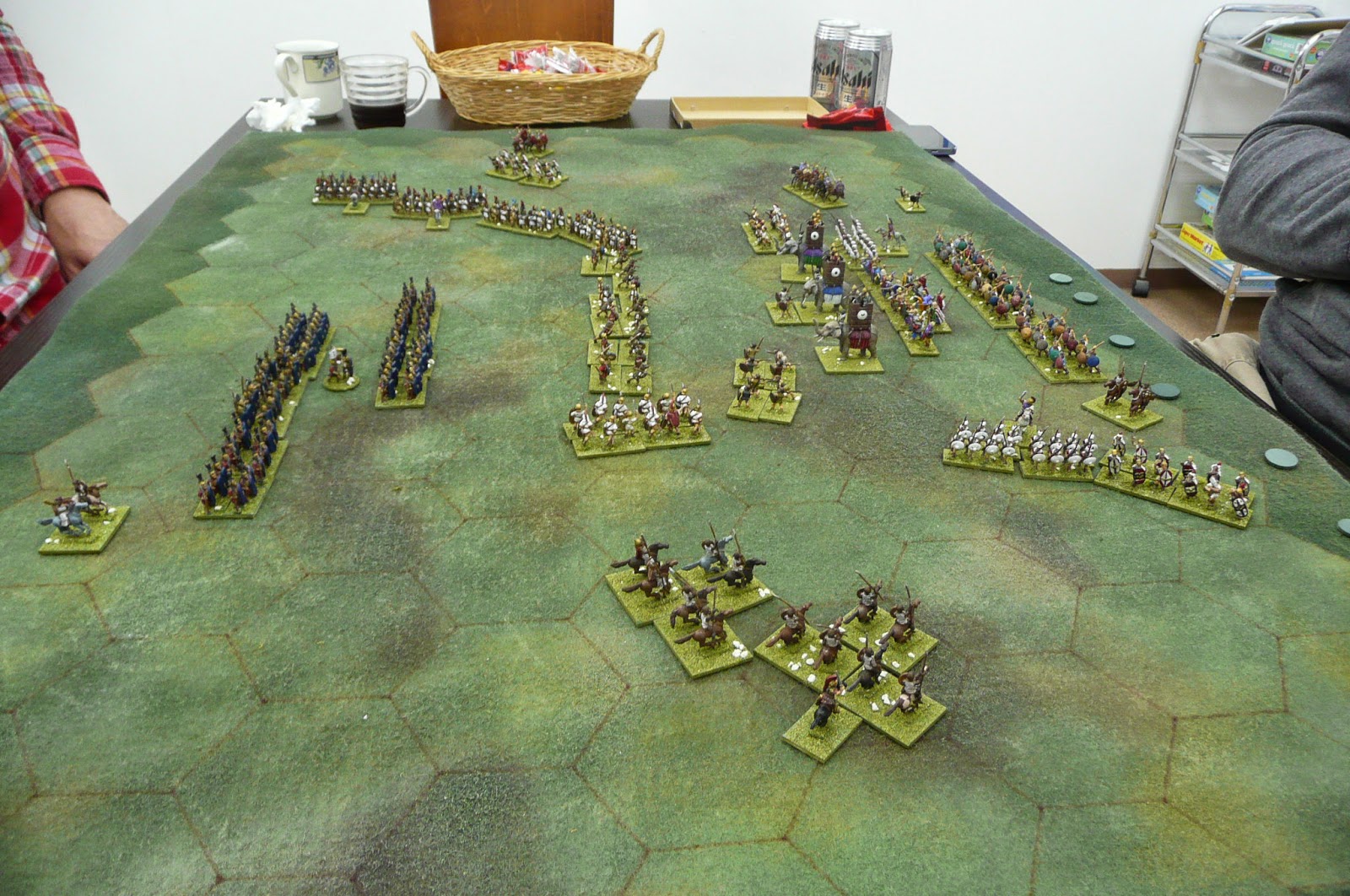 With the pressure building in the centre B sent forward a unit of elephants to hit the Roman heavy infantry, but he could not quite finish them off. 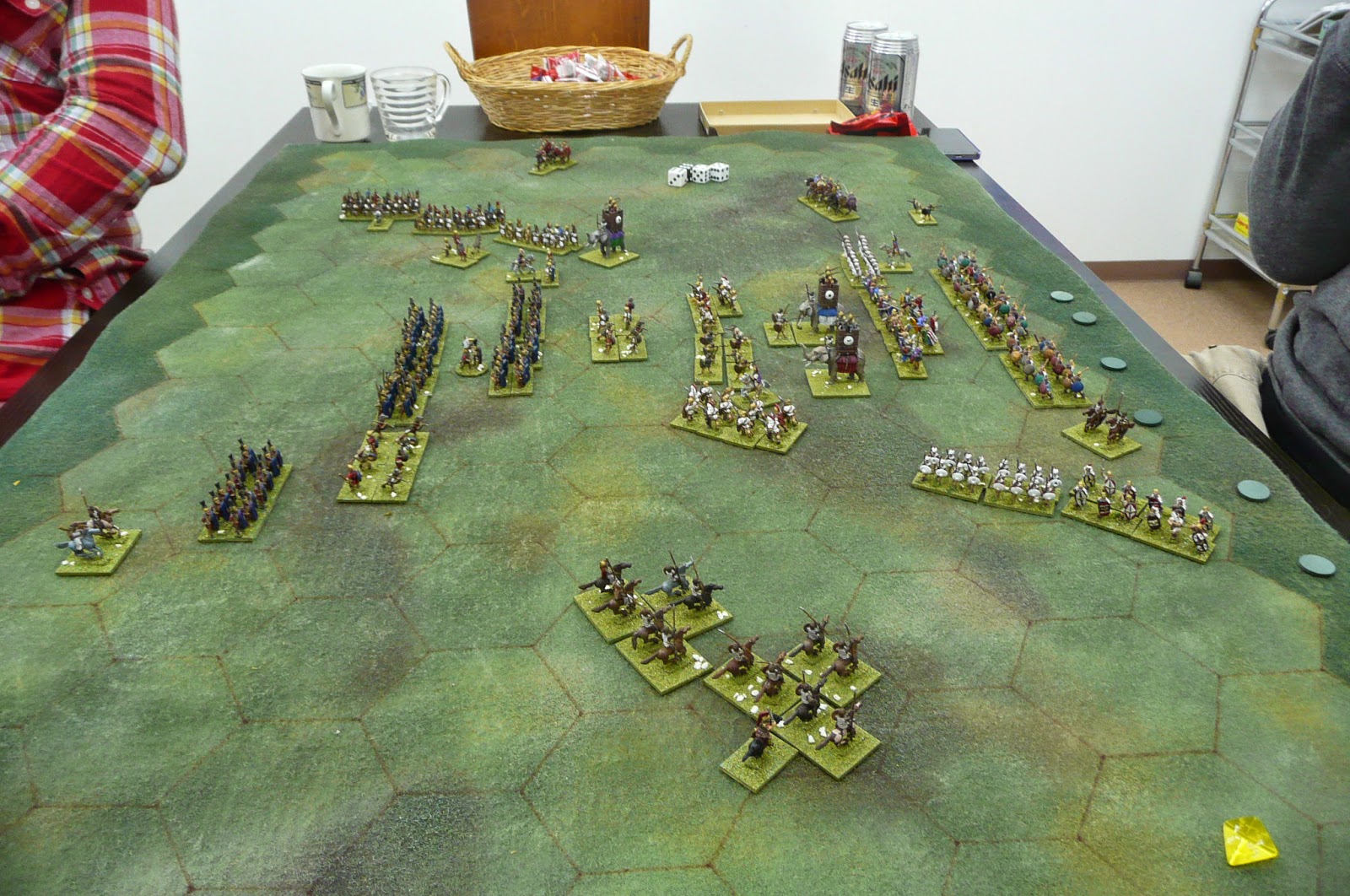 In the counter-attack the elephants were destroyed and two other units with them.  It was now 7-6 to Rome as her remarkable comeback gained pace. 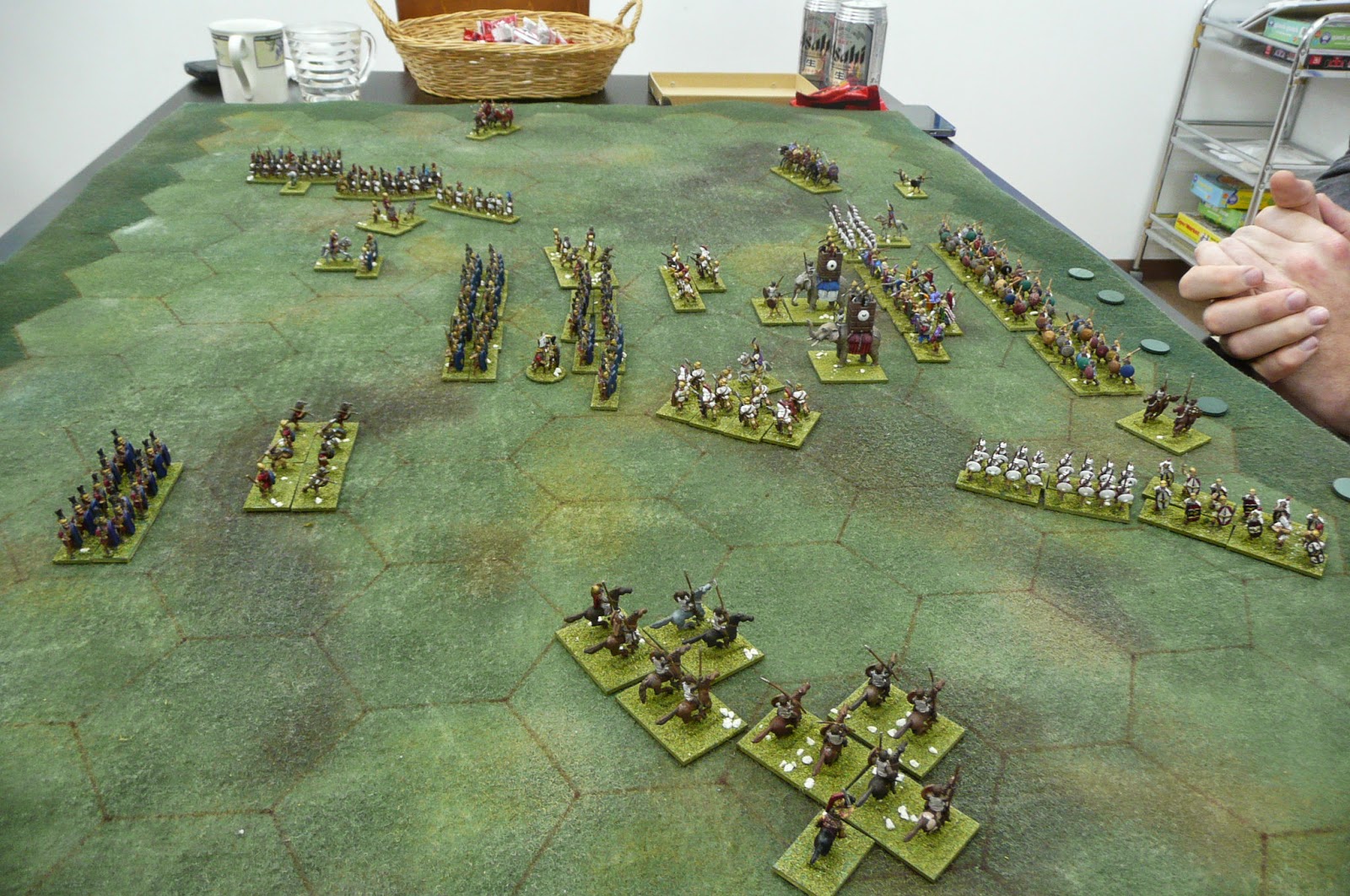 Carthage committed a second elephant which attacked a unit of hastati and while it died in the attempt it took a Roman commander with it.  Still needing one more kill to win the game, M could not quite manage it this turn as he failed to kill off the auxiliaries.  With the score 8-7 to Rome, B and his Carthaginians took up the pip die once more. 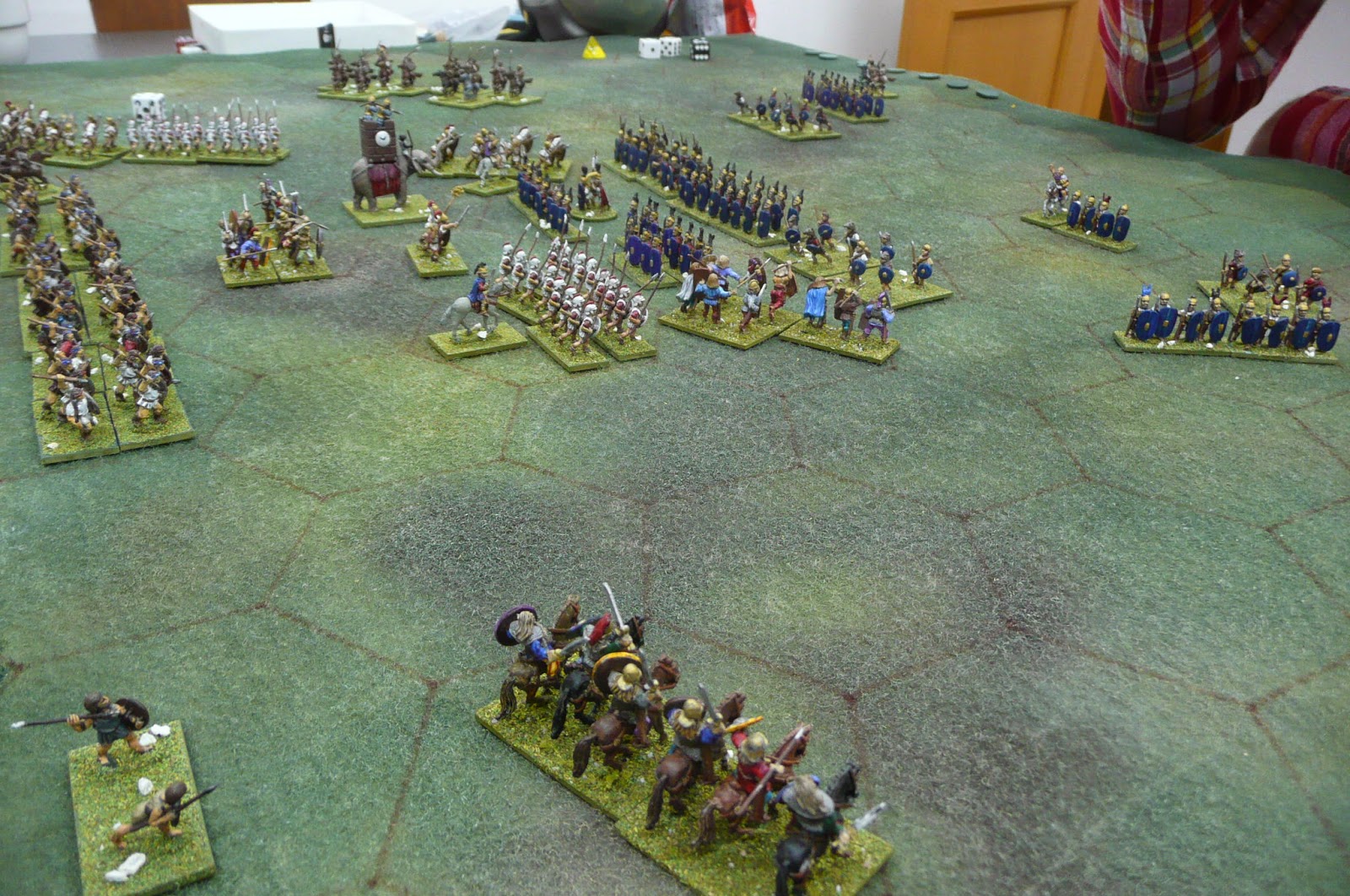 With two unit kills needed to claim the victory for Carthage, B threw in everything he could - elephants, Spanish auxiliaries and Gallic warriors.  If they did not win they would be killed in battle back, giving Rome the victory. It was to be knife-edge stuff... 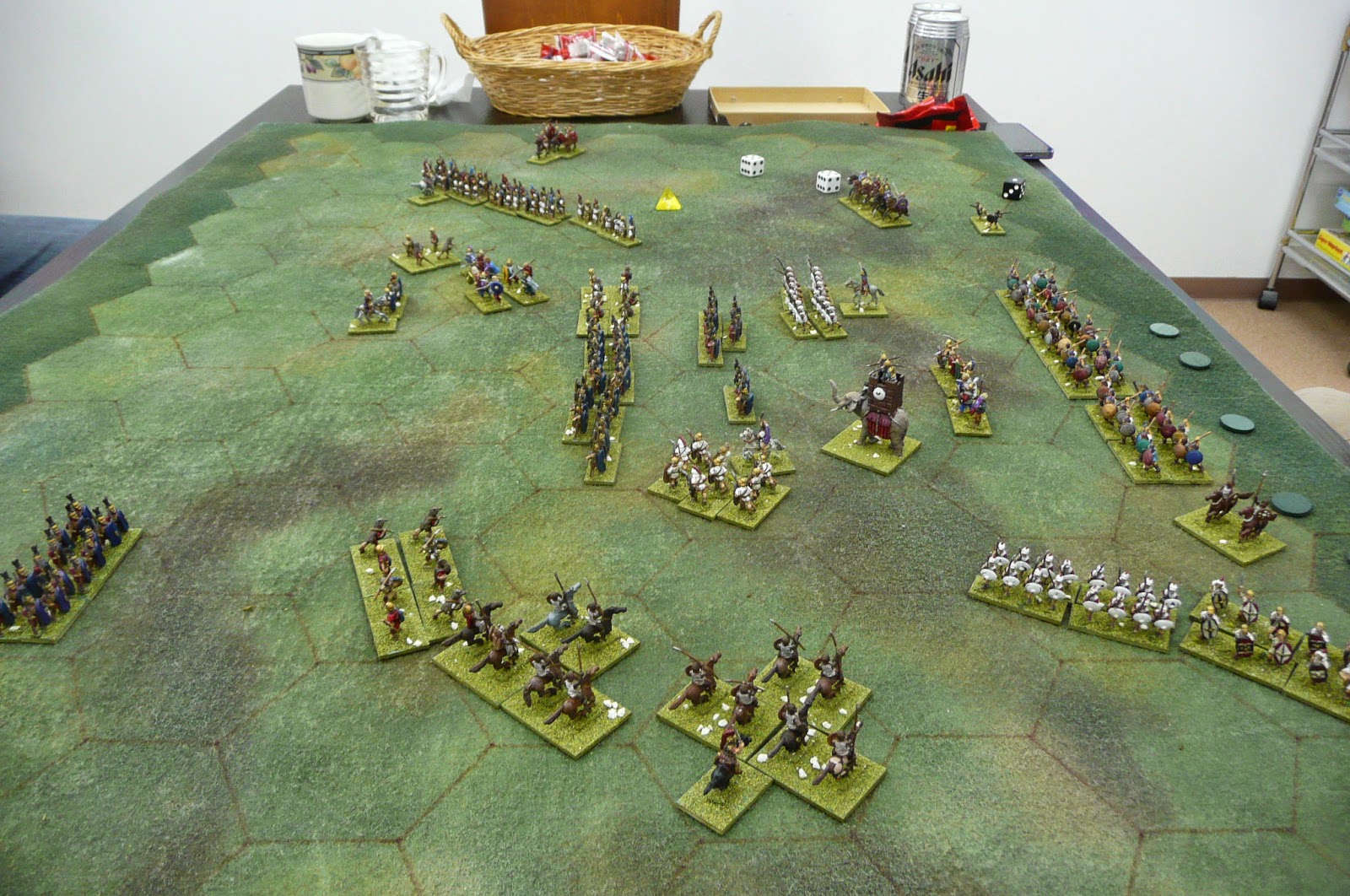 And knife-edged it proved to be: with his last two throws of the dice B managed to kill off the stragglers and claim the last victory points he needed to leapfrog his great mate M and win 9-8.

It was an exhilarating game that had a bit of everything and I was very pleased with how it all went. I think it vindicated the simple rules approach and the 'give-the-players-the-options' command rules.

Both players had a great time and are very keen to play again at some stage, so a good result all round!
Posted by Prufrock at 2:56 PM