Getting that mojo working.

Have been slowly getting my enthusiasm back after a couple of months of low gaming libido.

The catalyst has been my reading of the Aubrey/Maturin series from Patrick O'Brian. With Flying Colors and its expansion, Ship of the Line, on my shelves, the novels had had me eyeing up learning the system, but without finding the will to actually sit down to do so. 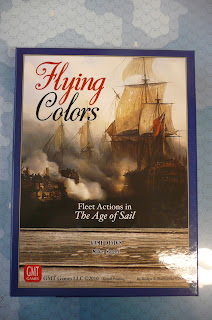 But I finally plonked myself at the table other night and have now played through a couple of one-on-one ship battles in an attempt to get the basics of manoeuvre and combat fixed in my head.  This seems to have gone well, and I began to enjoy it enough to try a larger scenario, Dogger Bank, 1781.

For this naval combat newbie the system has enough detail to feel as if you are playing an age of sail game - and are learning something - but not so much that you get bogged down in minutiae or that there are so many things to consider that you can't with a bit of thought tell a good course of action from a dud one.  I'm still working on the latter, but it's not overwhelming.

Here are a couple of shots of the progress in the first five turns. 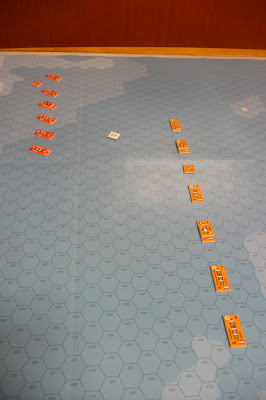 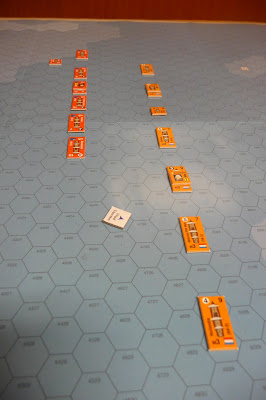 The British, with the wind gauge, are bearing down upon the Dutch line. 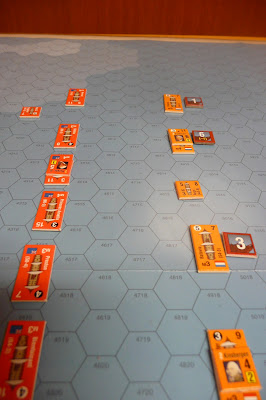 Forming into line to fire on the Dutch. 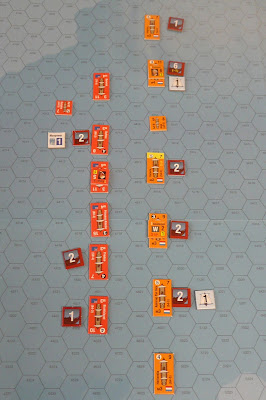 The Dutch are hoping to tack back and gain the wind themselves for a second pass, but it's not going too well at the moment.  Perhaps my tactics are to blame - as one instance I should probably have had the Dutch target the rigging instead of the hulls in order to break up the continuity of the British line.

Anyway, it's nice to be enjoying a game again!