On turn six the Carthaginians began by using the cavalry to attack the Roman rear.

The Gauls score one hit on the Roman centre... 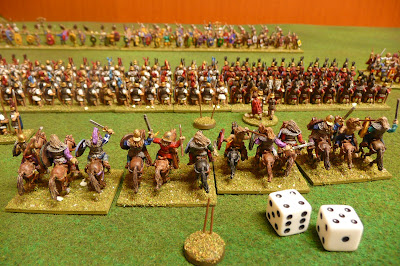 and Hasdrubal muffs his chance. 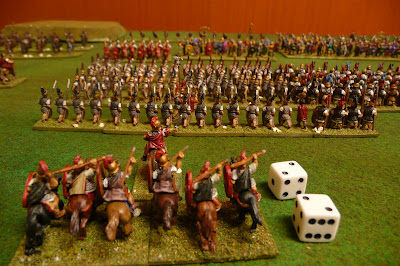 But the Numidians atone for their reluctance last turn by shattering Varro's guard. 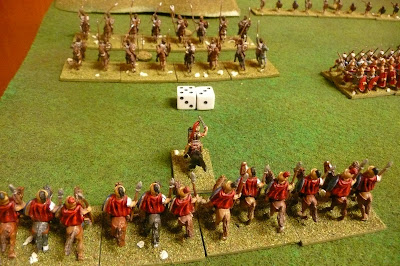 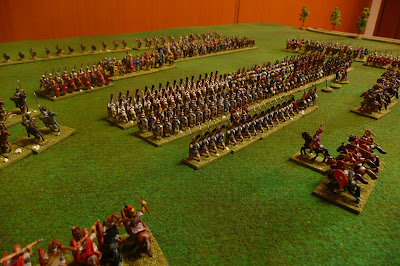 The morale die is cast with the army at -3: -1 or four or more units shattered; -1 for two or more uninspired generals withdrawn; -1 for having enemy to front and rear.

But these are legionaries.  They get a +1 for being heavy infantry, and a further by reason of their virtus.  A high morale roll will see them through. 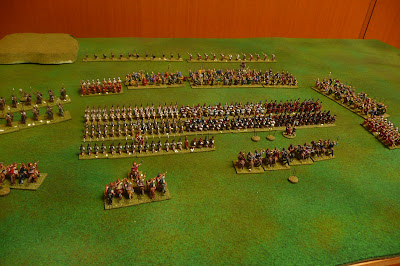 But it doesn't come - for the second time in the battle they roll a one, and the entire force streams off the field! 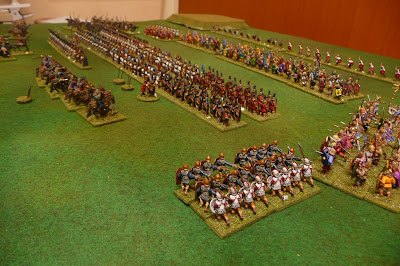 And so it comes time to tally the results.

The Romans start with a fighting value of 70 compared to the Carthaginians' 84, so they have a handicap of 42.  They have left eleven average quality Carthaginians units and one veteran spent, which adds 37 points to their tally.  They total 79 points.

The Romans have fled early, which is a mixed blessing.  Carthage has scored only five shatters, for a total of 30 points, but the Carthaginians have not suffered any themselves.  They can add another 30 points from routed units and 21 from units withdrawn (withdrawn units being fresh units who rout in sympathy).

So the victory points stand at 79 for Rome and 81 for Carthage, giving Hannibal a very tight victory.  If Rome had scored just one more hit during the battle, the points victory would have gone the other way.

This game is yet another mark in favour of Phil Sabin's excellent handicap system, which gives both sides a good chance of victory, even though in the field battle the odds may be stacked.

While there were a number of key moments in the game, the timing of Carthage's success was always slightly ahead of the 'battlefield clock', and this allowed enough depresssion of Roman morale to cause a rout before the fragile Carthaginian front began to fold under pressure.  But as the point results show, it was very close.  Ifs indeed!

It was a great game, and after a long time between (lost) battles, it has proved a timely reminder of the gaming I've been missing.