Luke and Pat came down for a game of Crossfire on the weekend and we ended up getting through two battles.   I umpired, but probably did more to confuse things than to clarify them!

The table was not of a very high standard as I don't have dedicated 6mm terrain (yet), but being gentlemen, Luke and Pat tried to downplay that as best they could.

The scenario we used was taken from Steven Thomas' site, and pitted a company of attacking US troops against two platoons of Germans.

The first game was a bit of a write-off for the German player because I read the victory conditions wrong and the US had an easier time of taking the objective than they should have.  That said, I don't think the result would have changed; the boldness of the attacker rushing the objective under cover of smoke paid off against the defender's concern to reinforce his north flank and defend the objective with fire rather than occupancy.

In this shot (looking from the east) we can see the objective in the middle ground with a platoon of Germans lined up on the crest to its right as the Americans in the distance steel themselves to make their assault. 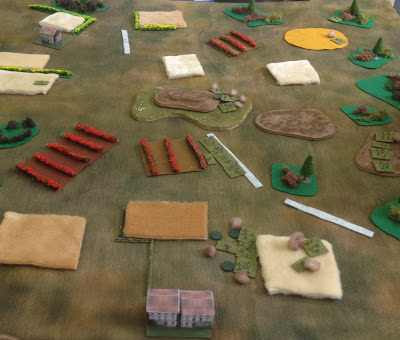 This shot (looking from the north) shows the result of the attack - the Americans have taken the hill, and although they've been somewhat cut up in the north, the diversionary attack drew off the German reserve and left no one available for a counter-attack.

For the second game the German employed a more central defence.  He occupied the hill with a squad, platoon commander and forward observer, put a platoon in reserve behind it, a squad covering the field to the south, another the crest to the north, and the HMG in a field to the rear covering the approaches from the south east.

This game was much tighter.  The American rushed the field to the south of the hill and got badly mauled by the single squad of Germans behind it.  The defenders pinned one squad with reactive fire, suppressed another, and then killed the close-assaulting third squad and platoon commander in close combat.  Not a bad effort from those men. 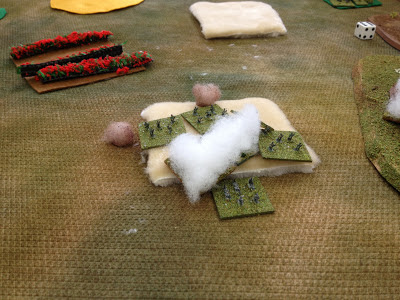 This photo shows the attack through the field: a textbook approach confounded by the dice heroism of the German squad.  Their heroism was not enough so save them from later American fire, however!  But leaderless and exposed, the remaining two squads from the American platoon now began to take fire from the German HMG.

Meanwhile, the American commander remained undaunted by the close-combat prowess of the Germans, and ordered his second platoon to assault the hill in identical fashion.  This time his close assault was more successful. 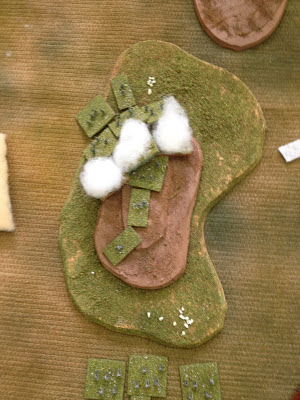 Here you can see the Americans attack, again under cover of smoke.  The Germans were quickly swept away by the assault, but the defenders behind the hill then began to lay down some effective fire.

Although time was running out for retaking the hill, the Americans were very near their breaking point, and on the last initiative of the game the Germans were left with the task of killing two suppressed squads to win.  The first squad was killed, but the second, on the last roll of the game, survived the fire of the deadly HMG.

It was a torrid battle, and I think really showcased how well Crossfire works.  The rules are fairly simple, but the results are believable - as are the way that we get to them - and the players are able to concentrate on gaining (or squandering!) advantage through tactics rather than by applying the rules better than the other fellow.

That said, there were a few murky areas in the rules when we got into some unusual situations, so some house ruling might be required here and there.  We were also a little iffy about how direct fire with mortars worked (though I may have read the rules wrong here) so a wee tweak or two might be in order with this, but we shall see.

Thanks to my comrades in (miniatures) arms I now see that Crossfire should work fine for solo play as well, so I'm looking forward to a few more sessions, and perhaps even a campaign.

So, a great day had, and many thanks to Luke and Pat for making the trip down.

But I really do need to get some better terrain...